Surfers and a shark

It wasn't until I saw a piece about this in the news that I realized what is going on and why. The drone photo shows a shark near a group of surfers. The surfers are completely unaware that the shark is there. Because of total internal reflection, the shark is visible to the drone at near-normal incidence but not to the surfers. Just when you thought it was safe to go back in the water! For the video, go here. 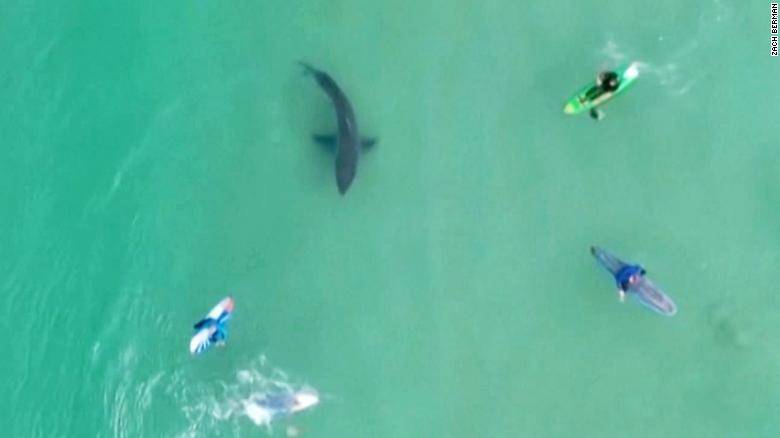 kuruman said:
Because of total internal reflection, the shark is visible to the drone at near-normal incidence but not to the surfers.

Maybe the shark actually does know. Could it be part of their hunting instinct for species that prey on animals that swim right at the surface?
BigDon

Bet the shark doesn't need it. They hunt just as well in complete darkness.

As one famous ichthyologist who was a specialist in lateral lines and ampules of Lorenzini said, "The moment someone sets foot in the ocean, every single higher animal within fifty feet knows you're there."
BigDon

As a sixty odd year resident of the San Francisco Bay Area I've had the great pleasure of seeing two of these creatures in the flesh and it's utterly awe inspiring each and every time.

The *small* one was a 16 footer! One honestly gets the impression you are looking at a carnivorous submarine!
BigDon

Oh, and by "higher animal" she was referring to anything more complex than a sponge. Even creatures buried in the substrate.
BigDon

So at a reunion I learned a young man I knew in the Navy, who's personality was such that he was one of those others call a "force of nature" passed away merely 8 months after I last saw him, when I was discharged. I bring him up here because had absolutely no fear of sharks. Petty officer Tunby was his name. Worked in Airframes and Powerplants. (He died when his home built aircraft suffered a structural failure on its maiden flight. It had been fully inspected and signed off on too. Lost a wing at five thousand feet above the hard deck.)

When one dives around certain islands in the South Pacific you have to be aware that due to the very steep sides of some of these volcanic islands, and no continental shelf, sometimes strictly pelagic species will be found in inshore waters. On a trip I missed, my friends were snorkeling way out in an atoll and drew the attention of a group of adolescent short finned makos. (Those are one of the bitey kind.)

Since they couldn't drop and stay near the bottom like when scuba diving and the sharks appeared to be getting more excited every time one of them came up for air he decided "to Hell with this!" and charged them!

They scattered completely out of sight!

Turns out sharks are like Orcs or Sand People. They can be startled, at least temporarily.

I heard about another man in Florida who was fully dressed and walking his dog along a swimming pier and noticed a surfaced bull shark cruising up behind a group of adolescent girls.

He did a "cannonball" off of the pier and landed inches from the shark's face, for the same result. He worked at one of the sea parks and thought it was a calculated risk worth taking.
jbriggs444
Science Advisor
Homework Helper

kuruman said:
Because of total internal reflection, the shark is visible to the drone at near-normal incidence but not to the surfers.

You do understand that total internal reflection does not result in a "dead zone" above the water's surface where the shark cannot be seen, right?

"total internal reflection" means that that some ray angles from the shark do not emerge from the water. That leaves plenty of other ray angles that do. Those plenty cover the entire above-the-water hemisphere.

jbriggs444 said:
You do understand that total internal reflection does not result in a "dead zone" above the water's surface where the shark cannot be seen, right?

"total internal reflection" means that that some ray angles from the shark do not emerge from the water. That leaves plenty of other ray angles that do. Those plenty cover the entire above-the-water hemisphere.

To be fair, low angles do mean a severe loss of visibility.

I do understand that and I agree that there is no "dead zone" when one draws a ray diagram with the water surface perfectly flat which the ocean water is not. It seems reasonable to think that the severe loss of visibility that you mention is related to the ripples in the water surface. They scatter the light coming from the shark in many more directions when the viewing angle is close to the surface. The same ripples don't have much effect when the viewing angle is near-normal to the surface.
Keith_McClary

jbriggs444 said:
total internal reflection does not result in a "dead zone" above the water's surface where the shark cannot be seen 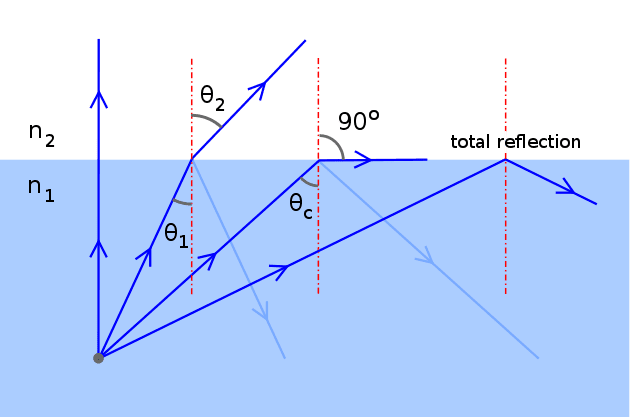 That is true but the vertical angle subtended by the image of the shark will get narrower and narrower. (A submerged sphere image gets very oblate at low angle)) Coupled with a little surface chop and it no longer registers as a shark.
jbriggs444
Science Advisor
Homework Helper

hutchphd said:
Coupled with a little surface chop and it no longer registers as a shark.

Well, being a diver I'm not a big fan of sharks. Usually I'm in the water and can see them just fine, but there is one situation that I worry my kids might run into one day... 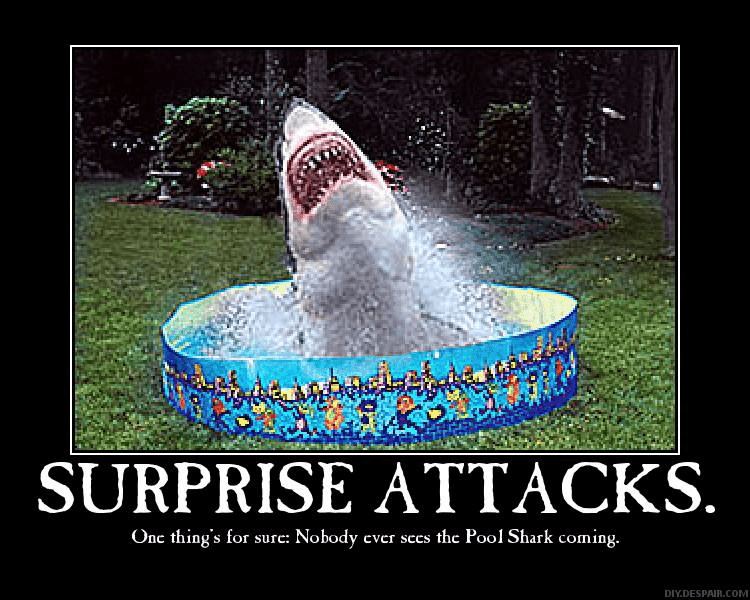 Suggested for: Surfers and a shark

Inclusivity and sensitivity: a term

And down the stretch they come! They're neck-and-neck....

News What animals are thinking and feeling, and....

A collaboration between different forums (PF and audio)

Questions About Systems and Their Components

Was bored today and searched for a puzzle. Came across this one....
2