So, considering all that you have said, if there's no physical change of the object's properties/length in the real world, this means that Length Contraction represents object properties translated from the 3D model into the 4 dimensional space-time coordinates system, where you indeed will have different measurements.

It's more the other way around. The 4D model is actually a better representation of the "real world" object, and it is the projection of that object onto our 3D perception of the universe that results in our measuring length contraction. Our three 3D world is just a "shadow play" of the 4D reality. We can only directly measure the shadows cast, and must infer the 4D model from that.

In this case, having an array of detectors in the Atacama desert at a distance of 1 mm away from one-another, and an object passes over the detectors with 0.9c (the object has a switch at the end and one at front) activating with both of the switches, simultaneously (in the array frame of reference) two detectors, the distance between those two detectors will be the proper length of the object. Though, if translated in the 4D space-time model, this will measure a Length Contraction.
So you never lose Length Contraction, you don't lose SR, you just have to translate the experiment in the mathematical form of a space-time model to have different readings, which makes sense in my mind. I mean, it was never meant to convince that length changes at relativistic speeds rather it is a different reading in a 4D space.

So, you will directly measure the contracted length, and if you know the relative speed you can use this to work out what the proper length is.

Yes, as noted above, the observations imply a contracted macroscopic environment in the frame of the particles.

Also, the macroscopic objects are made of subatomic particles. Accepting the bricks being contracted, but not the whole house makes no sense.
Ebeb

Janus said:
Our three 3D world is just a "shadow play" of the 4D reality. We can only directly measure the shadows cast, and must infer the 4D model from that.

I don't understand your 'shadow'. 4D world contains far more events than one 3D world. Hence a 3D world cannot be a projection nor shadow of such a vast 4D world. A 3D world is a section through 4D world.
DaveC426913
Gold Member


Ebeb said:
Hence a 3D world cannot be a projection nor shadow of such a vast 4D world.

You are taking his words too literally.
David Lewis

Simi said:
… Length Contraction at the relativistic speed of object O? Is it a real length contraction which can be perceived and measured from two distinct frame of references...

Not sure about the "two distinct frames of reference" part, but length contraction is real -- even at non-relativistic speeds -- just as time dilation is real. Things will happen more slowly (from your standpoint) for objects in motion with respect to you.
A.T.
Science Advisor

Simi said:
No I get it, it's not an actual physical length change but a measurement of length in a different system of coordinates.

In these discussions people often argue whether something is "physical" or "real", but often mean different things by these terms or don't even have a precise definition of them in their own mind.

Consider a circular train track and an unlimited supply of train engines, entering that circle from an tangential side track. The number of engines you can fit on that circle, depends on their contracted length. The faster they go, the more of them you can fit in.

Whether you consider that "real" or "physical" is semantics.
David Lewis

A.T. said:
The number of engines you can fit on that circle, depends on their contracted length. The faster they go, the more of them you can fit in.

Will the track be length contracted in the reference frame of the engine?
Ibix
Science Advisor
Insights Author

David Lewis said:
Will the track be length contracted in the reference frame of the engine?

The engine is not inertial, so length contraction does not apply to its frame. It's an acceptable approximation to consider any short section of a train as inertial, and deduce that it must be length contracted, but you cannot think of the whole track this way from the engine frame.
A.T.
Science Advisor

David Lewis said:
Will the track be length contracted in the reference frame of the engine?

As @Ibix wrote, you can consider an instantaneous inertial co-moving frame, where the usual Lorentz transformation applies, but an engine is only at rest for an instant.

Alternatively you can consider a rotating frame, where all the engines filling the circle are permanently stationary. So they are non-contracted and thus have a total length greater than 2πr, but still fit onto a circumference of radius r. You can interpret this as an non-Euclidean spatial geometry in the rotating frame. But note that the usual simultaneity convention doesn't work continuously along the circumference, so you cannot use simple Lorentz transformations to analyse this globally.

The point I was making with this example is that for storing moving stuff in a loop, the contracted length is the relevant one. So regardless if you call length contraction "real" or "physical", you have to account for it because it has concrete practical consequences.
Ebeb

You are taking his words too literally.

I thought the goal of communication in science was to be as specific as possible?

The 'projection' and 'shadow' wording follows from looking at a stick from a non-90 degree angle, resulting in a shorter view of the stick. This misleading analogy blocks the interested layman's mind from really understanding how it works .

Consider two trains moving relative to each other. The dots represent wagons of the train. In a train frame the wagons are simultaneously of the same color. But every split second the wagons change color, simultaneousely in their respective frame.
A contracted train is a collection of wagons of a different color: a 3D section through a collection of (in time) successive 3D trains of the 4D train object.

The contracted train is not a projection or shadow of a length of the proper train. It's the actual length of the moving 3D train (made of wagons of a different color and changing colors in time), present in the observers 3D space/world. 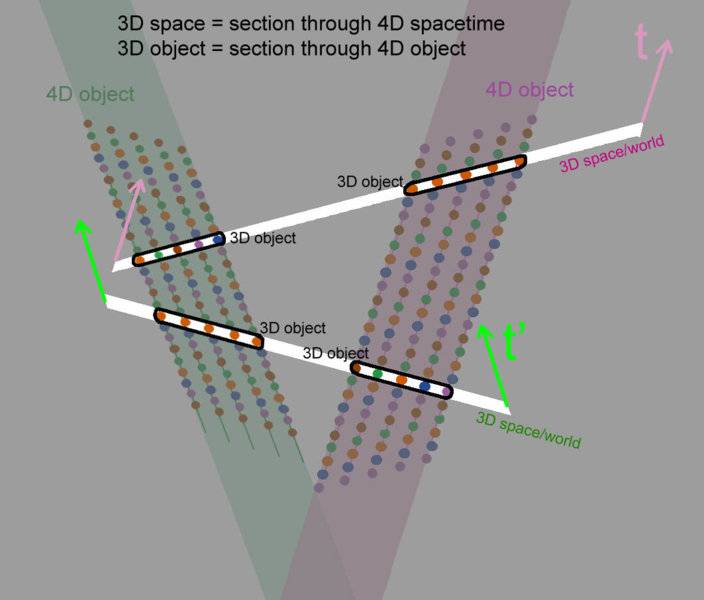 Ebeb said:
A contracted train is a collection of wagons of a different color

I haven't processed your post fully yet, but I have to say, you really missed an opportunity here: instead of wagons, you really should have used horses.

DaveC426913 said:
One never experiences length contraction in one's own reference frame.
That goes for anyone else in the same reference frame (i.e. stationary with respect to you).

So, observer A observes no length contraction in object O.

Hi. I am not a physicist but I watched an interesting video on YouTube regarding time dilation and length contraction. If the formula for length contraction shown in the video is correct, something travelling at the speed of light, ie: a photon, would experience an infinite length contraction. This would mean that the photon would pass the start and finish line of any distance instantaneously. Would this also mean that an entangled photon would be at the same point in spacetime as its entangled partner and so there would be no "spooky action" at a distance from the photons frame of reference?
jbriggs444
Science Advisor
Homework Helper
2019 Award

There is no such thing as the rest frame for a photon.

It would be self-contradictory to have an inertial rest frame for light in a theory where light moves at c in all inertial frames.
1977ub

For some interesting imagery regarding null intervals you might enjoy working your way through this:

Viopia said:
I watched an interesting video on YouTube regarding time dilation and length contraction.

At the start of the video he quotes the expert as saying "The photon experiences no time", he then goes on to say that zero time exists for the photon between the moment it is emitted and received. However, this second statement doesn't really follow the first according to Relativity. To see why, you have to look at the actual time dilation equation:
$$ T = \frac{t}{\sqrt{1-\frac{v^2}{c^2}}}$$
here T is time as measured by our observer, and t is time as measured by the clock that is moving relative to the observer.
So for example is v=.0866c, then T= t/0.5) = 2t, which equates to our observer measuring every tick of the moving clock as equally 2 ticks of his own clock.
But what happens if we make v=c? then we get T= t/0. But division by zero is undefined and has no answer. So for a photon, time is undefined. It has no physical meaning. It does not "experience time" because the whole concept has no meaning for it. This is not the same as it experiencing zero time. Zero time, even if it has no duration is still a defined duration, and there is no defined duration of time that light measures.
And thus if you go on to say that " the photon doesn't experience length either" this means that length is equally undefined for a photon. This is just another way of saying that a photon has no valid reference frame from which to measure time or space.
PeterDonis
Mentor
Insights Author
2019 Award

This thread has run its course and is now closed.

Edit: A thread hijack has also been cleaned up.
Log in or register to reply now!

Related Threads on Take on Length Contraction at relativistic speeds