The day after Labor day .

The day after Labor day...

Someone ask me about today, tomorrow.

It was one big shish kum bah after the other.

Actually, it started with a bang. A 747 landing in your front yard type bang, with flames, 20 feet wide, and 30 feet high, outside my bedroom window, at 4 am...

time for bed, now that I know what happened...

The story I spun in my head, with too little visual information...

And the 5 fire trucks parked in front of my house this morning for an hour, with all those Christmassy lights blinking, in the dead of dawn...

It couldn't have been a dream, could it?

OmCheeto said:
Someone ask me about today, tomorrow.

So, Om - how was your day yesterday?
OmCheeto
Gold Member

747 may have been an exaggeration.

Anyways, yesterday at around 4am, I was awoken by a loud boom. So I looked out my bedroom window and saw something like the following: 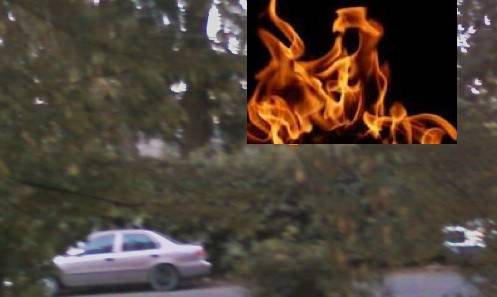 Not knowing where the flames were originating, I went to my front porch and saw the same thing. Then I heard someone scream. So of course I hurried to my phone and called 911.


So I went back to the front porch, as I couldn't see out my front window as the shades were lowered, and the flames were completely gone.

I went back in and called 911 and told them the fire was, um, gone.

They said thank you, and that the residents had also called.

So I went back out to my front porch and four big fire trucks arrived and the firemen spent about an hour making sure the conflagration/nownotaconflagration was out.

On my way to work, I finally got a look at the house, as it is almost completely obscured by a 10 foot tall Laurel hedge. It appeared that their entire 200 square foot wooden front deck had been what was on fire. The firemen had helped remove about 30 square feet of the siding from the front of their house.

But the mystery was, how could such a fire start with such a huge BOOM, and then be out in less than 90 seconds. My brain created all manner of scenarios during the day.

So I stopped by the neighbor's house last night and asked.

I was completely wrong.

OmCheeto said:
But the mystery was, how could such a fire start with such a huge BOOM, and then be out in less than 90 seconds. My brain created all manner of scenarios during the day.

The fire didn't start with the boom, so no cans of combustible liquids were required.

The boom was generated when the insulation around the power lines to their house failed, due to the heat.

I thought it was most fortuitous that the lines were positioned such that they became a very improbable fire alarm. Had the boom not woken everyone up, I'm pretty sure there would be no house left. And with the proximity of their fir trees, it's possible that... 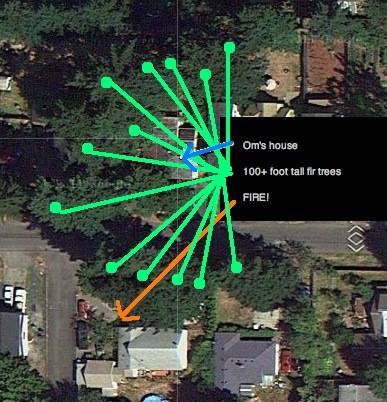 ps. The house is still without municipal power, as I can still hear their electric generator going.
Evo
Mentor

Evo said:
What caused the fire?

As far as we could tell, crack heads.

According to a new report, Oregon ranks fourth in the country for illegal drug use by people over the age of 12.

His property, like mine, is unfenced. So people of the night, can wander in and out, and do lolz kind of stuff.

ps. I hear the generator no longer running, and the power lines were not droopy when I got home today. Life is returning to normal.

pps. Though I've woken up at 4 am the last two nights for no reason, and think about it, and can't get back to sleep, and... I should call a lawyer...
lisab
Staff Emeritus
Science Advisor
Gold Member

According to a new report, Oregon ranks fourth in the country for illegal drug use by people over the age of 12.

Suggested for: The day after Labor day .

Today is a special day

Is today a special day?

Today is National Beer Day in the US!

How many items does Amazon need to sell per day to justify market cap?

Is it healthy for someone to count the days since his graduation?