I've just been watching the animated film Astérix et les Vikings. Apparently the inhabitants of Astérix's Gaulish village like to fight each other using fish as weapons!

This pic appears on a stamp (or even otherwise, is probably acceptable under fair use): 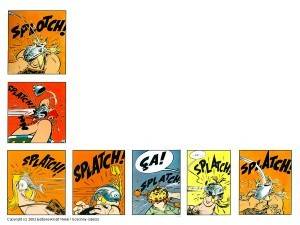 Sadly, most folks in the US are probably unaware of the genius of Goscinny and Uderzo.

I've only watched a couple of the animated movies, but I've read all of the comics (except, possibly, some of the most recent ones) in English. Anthea Bell does an excellent job of the translation.
Last edited: Jul 12, 2008
Evo
Mentor

When I was little, my mother used to recieve newspapers from France and I would always read the comics. Asterix was a favorite.
Andre

Definitely superior humor. Had most albums in Dutch, but then there was offspring.
Gokul43201
Staff Emeritus
Science Advisor
Gold Member

Andre said:
That's correct, you would lease fish for that from Ordralfabetix (Unhygenix).

I've never thought of this before: which character names in English are mostly translated from the French names and which ones did Bell just make up out of thin air?

If Andre (or anyone else familiar with the French version) would humor me, what are the French names for the following, and what do the names mean?

Some names, I think are likely not based on direct translations (because they have cultural connotations or phonetic reasons). Some that come to mind are:

And then there is (in English version) -

From the Wiki article cited by jtbell


As the story begins, the Vikings are depressed because in raid after raid they find the locations devoid of people. Cryptograf, an advisor to Viking chief Timandahaf, says that the enemies are always gone because, "Fear gives them wings". Timandahaf excitedly concludes that they must find a "Champion of Fear", who can teach them to be great cowards so they can fly, making them invincible. The chief says he'll give anything to whoever can bring him this Champion of Fear. Cryptograf hatches a secret plan to seize power and tells the chief they'll find the Champion of Fear in Gaul.

Some names, lots of (un)hidden pun

Gokul43201 said:
Sadly, most folks in the US are probably unaware of the genius of Goscinny and Uderzo.

I thought it was the most famous french comics ! They even have several movies.

Getafix is Panoramix in french because he can see the landscape, or bigger picture

Cacofonix is Assurancetourix : he needs an "insurance for any risk" because every end of the album, as he wants to sing for the celebration, he always ends up attached to a tree or anything else the drunken people do to make him stop.

Vitalstatistix is Abraracourcix... difficult play on words. It means something like "using short arms" which is an expression we use to describe what happens when a group of people start such a fight. And at the same time, he is the chief but is so short that he needs other people to carry him up on his shield.

I have not found the other names on the list of characters in Asterix on wiki, so I can not relate them for sure to the french ones.
humanino

humanino said:
I thought it was the most famous french comics !

I have been thinking if there is some political reason...
The idea of a small village resisting the roman invader relates to the french WWII period, but can also relate to a more economical picture after WWII. But I guess this is innappropriate in this fun discussion
humanino

Unhygienix is Ordralfabétix, the village fishmonger (son of Unhealthix or Oftalmologix), most often is bullied by Fulliautomatix (Cétautomatix) who claims the fish smells. Unhygienix indeed thinks Lutetia's fishes are of finer quality (from Paris), although they live next to the sea in Brittany (Bretagne).

Thank you humanino. I always knew having a Frenchman on the forum would come in handy some day. :tongue2:
humanino

Evo said:
Thank you humanino. I always knew having a Frenchman on the forum would come in handy some day. :tongue2:

I was grown up with Asterix

Related Threads on The origin of fish-slapping

Vince is back; Slap Chop

Fish Of The Forum
2

The science of fishing

Can Aug 27 be designated as Dope Slap Day?