The people who run malls are stupid

On Thursday afternoon, we got heavy snow all afternoon and into the night. We got about 7 inches of snow, but the roads were completely snow covered. Cars on the highway were only going as fast as 18 mph and they were sliding all over the place. What does the mall do? Stay open despite there being five people in the mall. Several stores including JCPenney closed early, but overall the mall stayed open.

Tonight and into Monday morning we're going to have a winter storm that's worse than the one we got on Thursday. Actually it's being classified as a Nor Easter. 5-10" of snow, plus a quarter to a half inch of ice on top of it. And don't forget heavy winds too. Will the mall be smart and close before it opens? Or will they be idiots, open, see one person roam the mall all day and wait until it's damn near impossible to drive before closing? Actually by the time morning rolls around it will already be damn near impossible to drive anywhere. But I doubt that will stop them.

Why are the people that run malls so stupid when it comes to hazardous weather?

Last year on Valentines Day we had the worst snow storm of the year. Over a foot of snow with city buses even getting stuck on the snowy roads. Did the malls decide to close before opening? Nope, in fact they stayed open until 2PM when all the employee cars were pretty much buried in snow.

I understand it's the holiday season and they need to make money, but when there's hazardous weather nobody is going to drive to the mall! If it was a ghost town on Thursday afternoon can you imagine what it's going to be like tomorrow?

And besides, the mall was so packed it was like a second version of Black Friday today. Nobody is going to go out tomorrow. Please someone explain any hint of rationale behind opening the mall regardless.

Do you work at this mall?
LightbulbSun

Cyrus said:
Do you work at this mall?

Yes. And it irritates me to no end that I have to risk my life driving in this kind of weather just so they can stay open for the two people that decide to roam the mall.
Moonbear
Staff Emeritus
Science Advisor
Gold Member

Call in sick when it gets that bad? I guess as long as there are stores in the mall that want to remain open, they have to stay open for them? You're right, it seems futile to stay open when going to the mall is the last thing anyone is going to do in bad weather. Maybe if it was Christmas Eve and you know there will be people out who are that desperate to go shopping for last minute gifts, but otherwise, people just stay home.
out of whack

What's the penalty in your case if you are unable to show for work due to road conditions?

...because in general, it's much easier to be forgiven for not showing up than to get permission not to show up beforehand...
LightbulbSun

Well our manager minimizes everything. She minimized how bad the road conditions were on Thursday afternoon. Tomorrow is going to be a piece of cake in her distorted world view. The other mall stores get a hefty fine ranging from $200-$400 if they close early. However, if two of the main stores (JCPenney and Macy's) both close then there's no fine to closing early.

I just want to know what would have to happen weather wise before they decide to close. Cause if the Valentines Day storm as I mentioned above didn't phase them then what will?
Cyrus

Yeah, to a store, $200-$400 is nothing. I'd just call in on your cell phone from the comfort of home and tell them you're stuck on the road in a snow drift and waiting for the tow truck so won't be able to get in. What can they do about it? The worst that happens is you lose your job...it's not like you can't get another job...not worth risking your life for a mall to stay open.
LightbulbSun

It really is nothing. Yet they make a big deal about that stupid fine all the time.
LightbulbSun

Moonbear said:
Yeah, to a store, $200-$400 is nothing. I'd just call in on your cell phone from the comfort of home and tell them you're stuck on the road in a snow drift and waiting for the tow truck so won't be able to get in. What can they do about it? The worst that happens is you lose your job...it's not like you can't get another job...not worth risking your life for a mall to stay open.

I'm going to call in. I honestly don't care if I get fired or not.
Four

Tell them you had bad stomach ache
NeoDevin

Call in well, tell them how great it feels to not go to work today.
ahmadmz

I worked in a mall for one year also, and yes it does not matter if the world is coming to an end, they will keep open. December timings are like 12 sometimes 13 hours a day. I myself have worked 12-13 hours a day last year :P Now my dad has to work there. Even if the sale is very bad, there are 2 customers in the mall it will open at 9 am and close at 10pm for whatever reason >_>.
NeoDevin

Over here we have West Edmonton Mall, I think it's now the second biggest mall in the world (I heard they built a bigger one in asia somewhere). The mall itself stays open 24/7/365 (366 on leap years). There is a hotel in there, as well as a couple of bars, and so the mall can't close, even though all the stores are closed.

Edit: On the mall's website they are still claiming to be the largest, so maybe not. Or maybe they just haven't gotten around to updating the website yet.

At least with a hotel, if you get stuck there, you can spend the night.
NeoDevin

I live within walking distance, so it's not a big deal for me.
Huckleberry

Last year here in the Portland area there was a few inches of snow on the ground that was left unplowed for a day or two. Within hours it had been packed down by vehicles into a sheet of ice that covered the roads. Even people with tire chains were sliding around. I went for a walk to the store and saw three accidents along the way, one of which involved 3 cars. People just don't know when they shouldn't be on the roads.

Here's some video of that snowstorm. I don't remember this sort of thing happening in New England, where the plows are running before the snow stops falling, and the roads are salted thoroughly.

Hmmm today is my first day off in 10 days, and I half to go Christmas shopping. Oh yea, and we got 8 inches of snow last night.

Huckleberry said:
Here's some video of that snowstorm. I don't remember this sort of thing happening in New England, where the plows are running before the snow stops falling, and the roads are salted thoroughly.

I watched something similar in Akron. I was having trouble getting up the hill. The roads were so slick that curb bumping up the hill wasn't working very well so I pulled in to each lunch at a fast food restaraunt and watched the cars going down the hill for lunchtime entertainment. It was like lemmings. A car would stop at the top of the hill, look at the carnage halfway down the hill, and decide to join the string of cars collected along the curb. The only thing people could do was to get out of their cars and watch their car slowly be demolished with each car that joined the string. You should have seen the look on their faces when the Pepsi truck came over the top of the hill.
Last edited by a moderator: Sep 25, 2014
LightbulbSun

Well I practically got only four hours of sleep last night. I wake up and it's a light wintry mix outside and the roads look like ****. Did it close? Nope, cause they're expecting a big shopping day today! Oh yeah! And on top of that the second low is taking forever to form so we get a nice dry patch. Alright! That oughta help the spirits of those shoppers today guys. This commute shall be fun. I ****ing hate malls. Remind me to boycott it forever, and ever.
LightbulbSun

Heh even the churches are smarter than the mall people. They planned ahead and cancelled all Sunday masses and Sunday school. But they're expecting a great shopping day of five people.
LightbulbSun

Actually scratch that. I heard another mall in the area is already busy. People bought into the propaganda, a couple died sliding off the road along the way, but that's ok guys we retained 60% of our great shoppers.
hypatia

Roads are already being plowed and salted, they actually have been at it all night. But I'll wait another few hours befor I venture out. Looks like we got about 10 inches, glad I got a great snowblower.
LightbulbSun

The sleet and freezing rain is coming within the next couple of hours.
rewebster 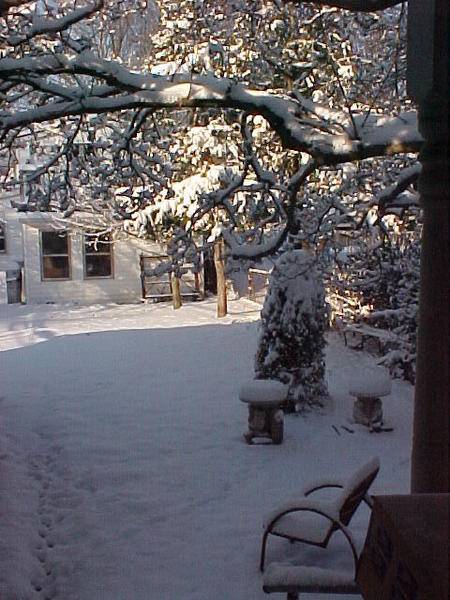 At least there's some football on today
Last edited: Dec 16, 2007
Log in or register to reply now!

Related Threads on The people who run malls are stupid

Why are some people stupid

Who ARE You People?
2

Who are the people of physics forums

People who are Studying Astrophysics - Are there many Women?

Are there any people here who enjoy writing?

People who are/have been in fraternities