The science of Godzilla

... It's an unfeasibly big late-surviving dinosaur (belonging to the hypothetical taxon Godzillasaurus, according to some), mutated by radiation, with a radioactive heart, and virtually impervious to other gigantic monsters, robots, artillery, laser blasts, lava and fire.

...How does Godzilla generate radioactivity? Apparently its stomach has mutated into a new organ: the plasma gland. Radioactive particles rise from here to be expelled via the mouth during combat, and excess radioactivity is also passed into the dorsal scutes at the same time 'not unlike the overflow guard in your ordinary bathtub', apparently (according to here: this is where the adjacent image comes from). Thanks to its plasma gland, Godzilla continually generates new radioactivity as a source of power, discharging the excess via the scutes and a duct leading to the mouth. This also means that Godzilla doesn't need to eat, and that must be a good thing when you weigh over 24,000 tons. There are other speculations on Godzilla's biology, including on cell structure, and on the mysterious substance known as Regenerator G-1 and allowing him unparalleled regenerative abilities. [continued]

This remiinds me of the Chemistry Professor who had a Star Fleet Medical Manual, which was written by legitimate scientists of an appropriate sort, and which covered the biology of common aliens; including the reproductive systems of 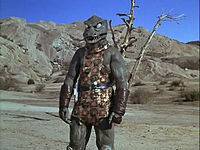 There are other speculations on Godzilla's biology, including on cell structure, and on the mysterious substance known as Regenerator G-1 and allowing him unparalleled regenerative abilities.

The next Godzilla film should pit Cher against Godzilla and revolve around her quest to kill him and aquire his regenerative abilities.
Share:
Share

Related Threads on The science of Godzilla

Nation that survived Godzilla is now imperiled by giant jellyfish

Science is the study of non-science

The Science Of Meditation?

The science of fishing

The Rise of Science

The Philosophy of Science

The Religion of Science
4

R
The religification of science
3

The science of visions
4

M
The science of HATE