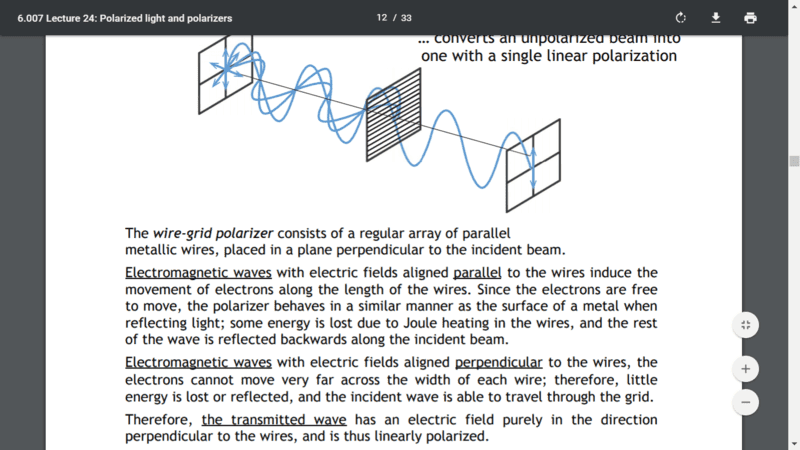 On the other hand, some part (maybe small) of all of the wave with polarization perpendicular to the wire should get absorbed by the wires.
So, the resultant transmitted wave should have the wave with both kinds of polarization.

The books which I have come across leave the above-mentioned ideas.
Could anyone please clarify it?

You are right that some energy from waves who have E-field parallel to the wires will pass through the gaps. But if we do the math we can prove that the energy that will pass is proportional to the ratio ##\frac{a}{\lambda}## where ##a## is the spacing between the parallel wires and ##\lambda## the wavelength of the waves. So if we arrange for ##a## to be sufficiently small compared to ##\lambda## only a small percentage of energy will pass and the rest will be reflected.

Also the percentage of the energy from waves who have E-field perpendicular to the wire that gets reflected is proportional to ##\frac{b}{\lambda}## where ##b## the width(the vertical dimension) of the parallel wires. So if ##b## is small in comparison to ##\lambda## very small percentage of this energy will be reflected and the rest will pass.
Pushoam

Pushoam said:
the wave whose polarization is parallel to the wire, gets absorbed by the wire

It's reflected and not absorbed. To be absorbed, you would need resistance wire of just the correct resistance value.
There is also a nonsense statement in the attached passage which says that "the electricity trans cannot move very far across the width of the wire". At a mean speed of a mm per second (drift velocity of electrons in a metal) and, assuming we have a classical motion for the electrons, how far in either direction would the electrons go in the period of oscillation of the RF wave? In fact, the whole passage is pretty nonsensical and would be better ignored. I wonder what surprises the other 32 pages have for the reader. Treat it all with care and stick to a proper text book.
Share:
Share

P
How do Wire-Grid Polarizers work?

Y
About polarization and polarizer

How to find the orientation of polarization of a polarizer

Condition for circular-wire polarizer to transmit no light