Hi! This problem was posted last month, and the due date was on the 10th so I can ask now.
Here is the problem: http://www.komal.hu/verseny/feladat.cgi?a=honap&h=201102&t=fiz&l=en"

I know the magnetic flux can't change suddenly in time, which means that after closing the switch the total current inside the thoroid must remain I0. However, I have no idea how to calculate how much of this current goes through the "top" half of the toroid, and how much through the bottom. If I knew that I would be done, since the difference of the two is the current going through the switch. If anyone could start me off and guide me through this problem that'd be great and much appreciated.
Thanks!

The iron core is just used for concentrating the flux through the coil. I think we can break it into two equal coils (cut the iron ring in b/w the two wires on the right). I wonder why they did not give 'L'.

It is toroid isn't it? I wrote that in the first place, then saw something on the internet and changed everything to thoroid:) oh well...

Anyway, I realize the iron core is just for concentrating the flux, and that we can break it down into two pieces, but there isn't much I could to from there... I wrote Kirchoff's equations for the 3 loops we have, but the two coil parts give two L*I' parts, where I' is the derivate of the current through them, and that's two different currents, and I couldn't do much with it...
zorro

That was just a thought. I did not arrive at any answer. I will post it here if I solve it.
zorro

I am posting a problem which I think is similar to this one. Try it if you want to.

In the circuit shown, the switch S is shifted to position 2 from position 1 at t=0, having been in position 1 for a long time. Find the current in the circuit as a function of time. 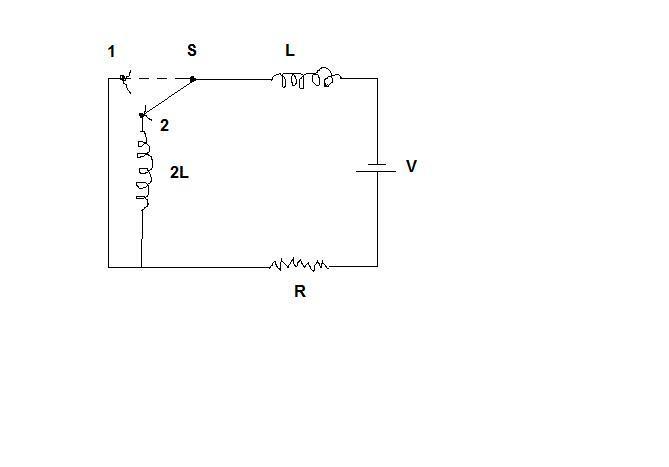 Ask me if you have any problem here.

The coil cannot be broken into 2 separate coils!!!

To explain why briefly, that's because there is magnetic flux linkage between the upper half and the below half of the coil, i.e. B-field by one half penetrates into the other half. If they were 2 separate coils, their magnetic fields would be separate.

Okay, then why B-field by one half can penerate into the other half? That's because of the iron core. One important characteristic of the coil of whose rounds are linked by ONE iron core: The magnetic flux through each round is the same and is the combined result of B-field by all rounds.

In this problem, there is a difference between the current of the upper half [tex]i_a[/tex] and that of the lower half [tex]i_b[/tex], so I suggest you should go back to the most fundamental.

(1): Therefore, for this problem, the magnetic flux [tex]\Phi[/tex] through the whole coil cannot change immediately.

(2): Suppose that the iron core is uniform and linear. Plus the fact that the 2 halves are geometrically identical, we have B-field by each half is: [tex]B_a = ki_a[/tex] and [tex]B_b = ki_b[/tex]. Notice that the proportional coefficient k is the same for the two halves, as they are identical.

(5): Write down Kirchhoff equations and solve

P.S.: A note on the separation of the coils. Personally, I think the inductor and all the equations involved like [tex]\Phi=Li[/tex] are the creation of engineers, not scientists. Scientists only say: [tex]e_{induced} = -d\Phi /dt[/tex] or [tex]e = - Ldi/dt[/tex] at best, and that's all about Maxwell's equations. To go from that equation to [tex]v_L = Ldi/dt[/tex], we need some engineering model. So don't mistake that the equation [tex]u_L = Ldi/dt[/tex] describes nature. It never does.
The equation [tex]e = -Ldi/dt[/tex] is just like in the middle between science and engineering. It does assume a lot: the coil must be isolated, B-field is only concentrated inside the coil, there is no external B-field penetrating into the coil, etc. Such simplicity, though scientifically understandable, shows the sense of engineering. So a warn to those who want to go for engineering: sometimes simplicity in engineering may destroy your dream if there is a lack of rigorous science.
Yet, even scientists love simplicity

Whenever I said "have two coils", I meant that the fact it's a toroid and the coil is in a circle doesn't make a difference, but we can have two straight coils connected with an iron ring inside them. Anyway it doesn't matter, sorry for the misunderstanding.

For the ADBCA loop (the one without the switch):

For the ABCA loop:

And the ABDA loop:

And we have the following equations as well:

I think that's correct. Thanks very much!!!

Tusike said:
Wthat the two emf's were equal, so I had two L*dI/dt parts in my equations

That was an ingenious solution hikaru. Did you solve such questions before?
hikaru1221

Yes and no.
Yes because I probably solved similar problems before, but I don't remember any at all
No because there is no point remembering old problems, except for the understanding and insights behind them
zorro

hikaru1221 said:
No because there is no point remembering old problems, except for the understanding and insights behind them