Time constant for an inductor? 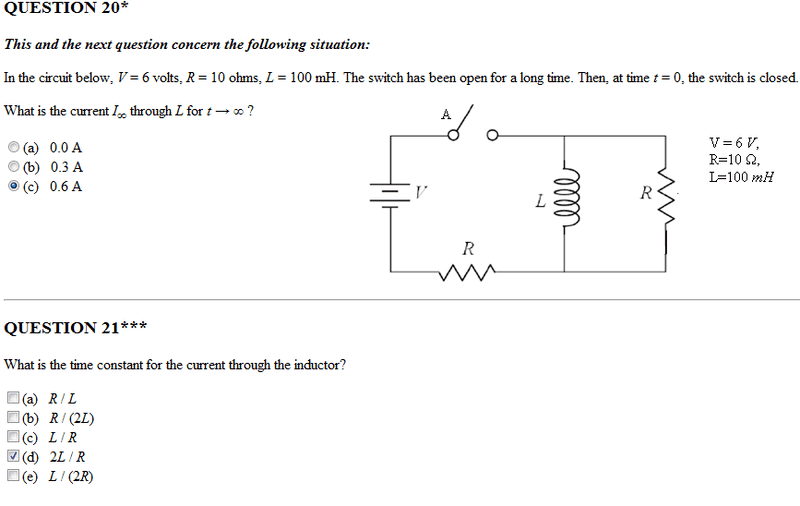 Why is this the correct answer and not L/R? I thought the inductor will only take into consideration one Resistor as in both circuits (switch closed vs open), current will only flow through one resistor at a time.

EDIT: Moderator's note -- I have moved this thread from Advanced Physics to Intro Physics -- Redbelly98
Last edited by a moderator: Nov 27, 2011

Hi...!
Have you tried using Ohm's law, and solving for the currents?
It seems that one can obtain the right answer by doing that; Recall that the voltage that is exerted on both the Inductor and the second resistor is not V but V-I*R, and thus you should obtain the proper image, I'd think.
Daniel
gneill
Mentor

For Question 21 they really should have specified whether the switch is open or closed. The circuit will have a different time constant for each position.

In order to calculate the time constant for the switch-closed case you will have to determine what total resistance the inductor "sees". To do that, remove the inductor from the circuit and suppress any sources (in this case you short the battery). Determine the equivalent resistance of the resulting network looking into the inductor's connection points.

Related Threads on Time constant for an inductor?

Time constant of an inductor coil

J
Time constant for the current through the inductor

Find current through inductor after many time constants.

D
Time required store half the maximum energy in an inductor

Time constant in an RC circuit