i have a question that i cant seem to find the answer to, if you are in an suv and youre going up a sand slope slow like 5miles per hour , up to a point the suv will slow down and the wheels start to slip, you can use momentum to go over i know, but say i was in 2 wheel drive vs 4 wheel drive, i can go up further using 4wd and if i lower the pressure i can go even further up the slope. how can one increase the friction on deep soft sand. wide tires or narrow ? tall tires or small ? high pressure or low ? my questions are strictly about going up a sand dune slow with no or as little wheel slip as possible.

You are essentially destroying the structural integrity of the sand pile. You need to distribute your dynamic load over more sand. Wider tires will do this. Four wheels vs two wheels will do this. Lowering the pressure also widens the tires.
garkoi

Dr_Nate said:
You are essentially destroying the structural integrity of the sand pile. You need to distribute your dynamic load over more sand. Wider tires will do this. Four wheels vs two wheels will do this. Lowering the pressure also widens the tires.

thank you for explaining it so simply.
sophiecentaur
Science Advisor
Gold Member
2020 Award

Dr_Nate said:
You are essentially destroying the structural integrity of the sand pile.

Agreed and this is only an extreme case of the normal traction situation. In sand, the tyre digs into the sand and distorts it so that you need to go 'uphill' to make progress into the wall of sand at the front.

But the same thing applies to an ordinary tyre with standard pressure. You are constantly having to climb upwards, to lift the car from the lower level because of the tyre distortion. Or you could say that you are constantly having to compress the front of the tyre footprint so that it fits in the space under the wheel. (It depends on which reference frame you choose). In the case of sand, you just have lower friction and more distortion.

FWD will instantly give you (approximately) twice the traction force of TWD and the driven wheels will need to do less work individually in lifting the vehicle up out of the sand.
The losses involved in shifting all the sand will have a big effect on efficiency (mpg) in the same way that harder tyres improve mpg but at the expense of traction.
Baluncore
Science Advisor

This is not a friction problem. Forward traction is limited by shear strength of the sand near the surface. Lower tyre pressure increases the tyre contact patch area. The increased contact area can handle more shear, and so provide more traction.

If the sand is at close to it's rest slope, such as in the lee of a dune, it will not be possible to climb the slope.

A 2WD vehicle will typically only be able to climb half the slope that a 4WD vehicle can climb. That is because only half the shear area is available to provide traction.
sophiecentaur
Science Advisor
Gold Member
2020 Award

Baluncore said:
This is not a friction problem. Forward traction is limited by shear strength of the sand near the surface.

It's that 'naming' problem, again. You can call it limiting friction or shear strength, depending on whether you start off with the sand as a hard, non-linear fluid or a soft solid. It really doesn't fit into either category under the particular circumstance that we're discussing. I'm not proposing any solution to this problem but I'm sure the solution doesn't lie in sticking to either model in particular.
garkoi

If the sand is at close to it's rest slope, such as in the lee of a dune, it will not be possible to climb the slope.

how does large vs small diameter effect the tires ability to go over sand ?and is there no way to climb the lee of a dune at all ? no matter how big or wide the tires are ?
Baluncore
Science Advisor

garkoi said:
how does large vs small diameter effect the tires ability to go over sand ?

A larger diameter has a larger radius of curvature, which is flatter and so has a greater contact patch area.


garkoi said:
and is there no way to climb the lee of a dune at all ? no matter how big or wide the tires are ?

In the lee, where the slope is so steep that it is at the transition to flowing, you could keep pumping sand with the tyres, from above in front, to behind and below, until you had cut a ramp, with side batter, through the dune wide enough for a vehicle to pass.
berkeman
Mentor

garkoi said:
is there no way to climb the lee of a dune at all ? no matter how big or wide the tires are ?

garkoi said:
how does large vs small diameter effect the tires ability to go over sand ?and is there no way to climb the lee of a dune at all ? no matter how big or wide the tires are ?

Surprised no one has mentioned it but this is a thinly disguised age old question/argument in the off road world, to float or not to float.

To float or sink: Basically this comes down to whether or not there something harder with more support underneath the soft stuff, if so, "pizza cutter" type tires work well ie they cut through the soft stuff to find hard material to get traction, driving wheel of a tractor would be an example of this.

If there is no bottom in sight, then "high flotation" tires are key. These aim for largest contact patch within a wheel size. They also have sidewalls designed to allow the tires to be aired down significantly, at the extreme end of this are the rock crawling guys that run tires so low they need to bolt the tire bead to the rim to stop it slipping or loosing all the air (normally tire pressure does this), google "bead lockers".

This pressure drop does two things, increases the contact patch by approximately the ratio of pressure drop, ie if at 30psi you have x contact area, reduce the pressure by half and the area will ~ double. The result is that the contact patch pressure is reduced by half. As an example, I nearly got my old landcruiser stuck on a beach, fortunately have off roaded long enough to know what it feels like when the wheels move but truck doesn't, where even a fraction of a wheel turn is enough to result in you being so augered in that you may as well start the walk home. Dropped the tires to maybe 5psi, low ratio 1st, loads of drift wood and grass in front and very very carefully drove out.

Then secondly it allows the tread to deform around the surface, and this is important both in soft and hard materials, if the tire wraps around the sand and compresses it from more sides, its less likely to move, giving you more support.

Last but not least is velocity.

As others have mentioned, sand and other fine materials exhibit fluid like properties, so as you drive faster the tire tends to float over the material rather than sinking in, much like the difference between planing hulls and displacement hulls (boats).

Then if you look at the rear tires of that bike berkeman posted, you might notice that they have paddles, not unlike an old river boat. This is because forward motion here is less about friction and more about thrust from the mass of stuff thrown out the back. With sufficient speed and sand rail tires, cars can drive on water:

So on the lee side, to get up the method would be "what ever you do, do NOT let off the gas!!!!"
Baluncore
Science Advisor

essenmein said:
Last but not least is velocity.

garkoi said:
... my questions are strictly about going up a sand dune slow with no or as little wheel slip as possible.

Crawling slowly up the flowing lee of a dune at it's angle of repose will be particularly difficult, if not impossible.
berkeman
Mentor

I've never crawled at a slow steady speed all the way up a slipface on my motocross bike (CRF450), but I have started slow and accelerated all the way up and over, jumping with a big smile high over the top. Does that count?

I have climbed very slippery, very steep hillclimbs before, so it is possible to go up slowly if you know the tricks for steering a motocross bike when there is little to no traction. (Quiz Question -- anybody here know what the main trick is?) But again, that trick uses lots of wheelspin to maximize traction and forward force from your rear driving wheel on your MX bike (or competent dirtbike)... 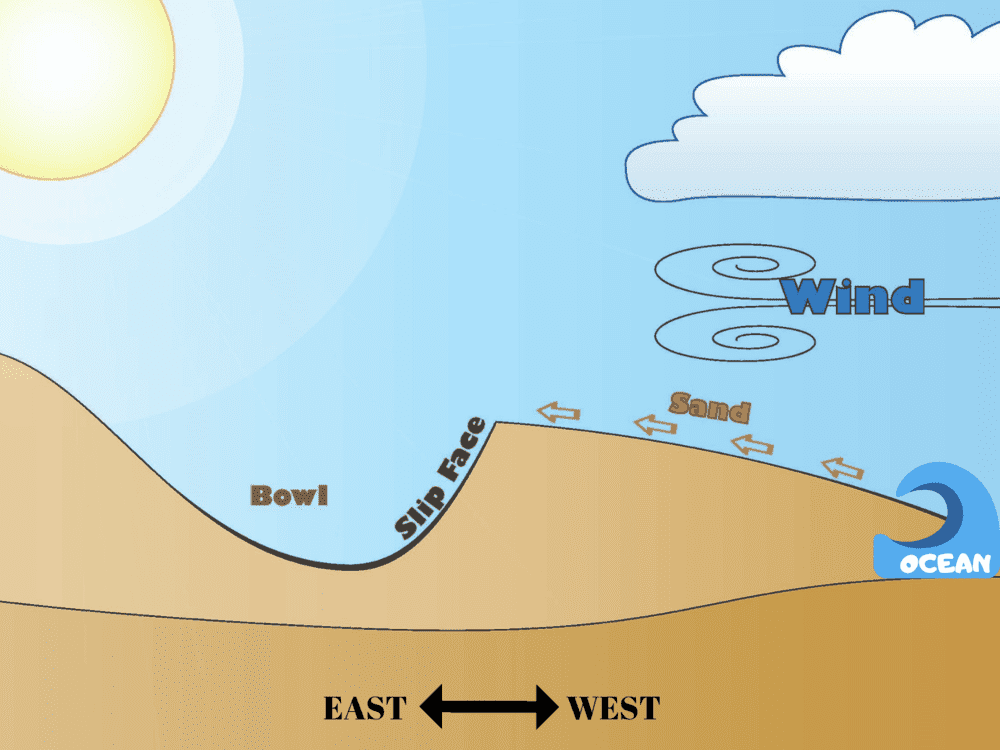 garkoi said:
my questions are strictly about going up a sand dune slow with no or as little wheel slip as possible.

But I'm not sure that the optimum climbing profile for slippery slopes can incorporate no slipping. Trials bikes proceed pretty slowly over obstacles, but over slippery uphills, I'm pretty sure they also use extra wheelspin to give maximum forward thrust... 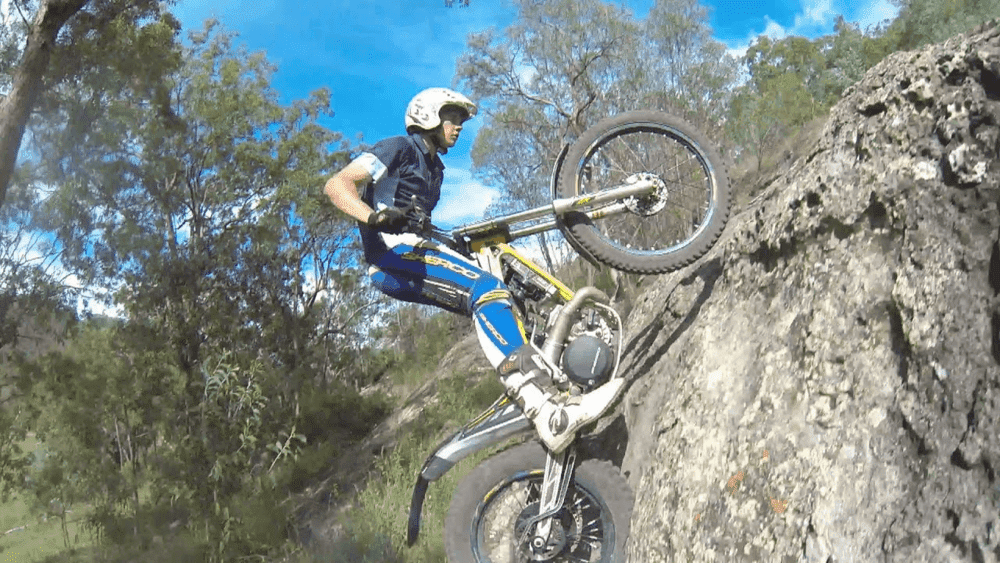 On a bike, if you ride the contour around to the end of the face, you may gradually lose some height, but where two dunes meet at an angle, the line of intersection of the two faces forms a shallower angle 'V' than do the individual faces. Golf “links” are named for the flatter links that form between dunes.

Contouring on flowing sand cannot be done in a 4 wheel vehicle as the centre of mass is immediately transferred to the lower side, which digs in deeper and so can initiate a roll.
Baluncore
Science Advisor

@berkeman
That picture looks much more realistic when the trees behind the rider are restored towards the vertical. 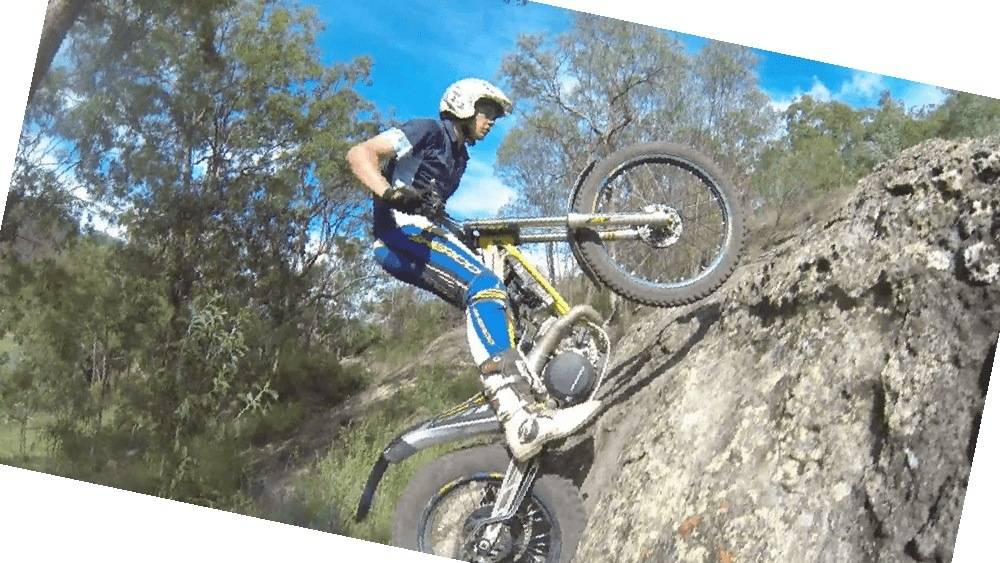 Axial traction of a beam on support

Why are the traction vectors on each surface independent?

Traction Around a Cylinder

Automotive Normal load on the tires of car