I saw a video on FaceBook today that showed traffic turbines. They supposedly generate "free" energy from the traffic that passes by them causing them to spin. Just because I'm curious, I was wondering if this energy isn't really free, but is in exchange of a minuscule drag put on the passing vehicles thereby transferring the energy cost (as small as it might be) to the drivers that pass by.

After a Mentor discussion and a PM discussion with the OP, the thread is re-opened. The key here is energy recovery without placing an extra energy burden on the passing vehicles. It appears that this may be possible with some of the technologies that the OP @InquiringMind has been reading about.
anorlunda
Staff Emeritus
Insights Author 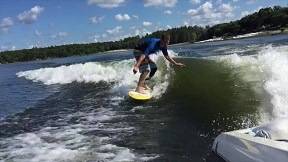 You can model a vehicle on the highway as H<<L (High pressure at the front, Low at the back, < shows direction of motion). Some vehicles are short H<L, some long H<<<L. So a highway with 4 vehicles might look like this.


If we put a pressure sensor on the side of the road, it would record a transient like this for each passing vehicle, with the time between high and low peaks roughly one half second.

Can we extract useful energy from those H and L pressure fluctuations?

So where does a traffic turbine fall on the macro/micro scale. Imagine the blades of the turbine accelerating, then reversing direction in a half second. What do you think?

[Note: I originally rejected this thread because I was thinking of the micro, which made this idea ridiculous. But that was hasty, and the better answer is that "it depends on scale."]

InquiringMind said:
I saw a video on FaceBook today that showed traffic turbines.

It would help if you could give us the link to that video.
berkeman
Mentor

sophiecentaur said:
It would help if you could give us the link to that video.

It looks like the OP is not online yet today, so here are his links from my PM conversation with him:

InquiringMind said:
The video that I originally saw on FaceBook was this one: featuring the Enlil Vertical Axis Wind Turbine. The company also has this video which says that the turbine "captures the flow of traffic on the road":

Since seeing these videos, I Googled Traffic Turbine, and found other references to the concept:
http://www.konbini.com/us/lifestyle/innovative-roadside-turbine-using-traffic-harvest-green-energy/

Even this one from Shell Oil: https://www.shell.com/inside-energy/turbine-turns-traffic-into-energy.html

I am always skeptical about energy harvesting as a concept because any proposals I see are very light on actual figures for recovered energy. the videos of turbines turning as buses go past them say nothing about the actual energy obtained by them. When we see leaves being swept along by a passing car, what actual energy was involved? Clearly it is finite but would it be worth while trying to 'harvest' it, compared with putting a tubing a bit higher up in the air and getting the wind to turn it? I do know that small scale wind turbines are pretty much a waste of time unless there is really no alternative supply for your remote piece of electronics. I had a small wind turbine which (mostly) topped up my boat start battery and nothing more.

As usual, if you are hoping to obtain significant levels of power, there will be significant interaction with the vehicle which will increase the required power for the vehicle. What people are after is a way to use power that is lost anyway but vehicles are designed to minimise the lost energy. Wasted power will tend to be due to turbulence which is in an incoherent form and difficult to utilise.

One identifiable form of 'coherent' energy that is wasted by transport is the massive wake that is set up by large passing ships. That always strikes me as a possible source of energy, waiting to be harvested. However. ships pass quite infrequently (only a few per hour in even the busiest shipping channels) and it would require a very wide collector to accumulate enough energy to be significant. The natural waves hitting the shore would actually constitute a more worthwhile source but wave power has only been shown to be viable in a few locations where the waves are actually pretty high most of the time. I think a similar objection also applies to harvesting 'truly' wasted energy from traffic.
Share:
Share

I Pinwheels for Wind turbines? In class, pinwheels proved most

B Wind turbines on planet Mars

Wind turbines turning in no wind?

Can this be solved without a knowledge of turbines?

At what size do turbines stop becoming efficient?

Why do Wind Turbines have such large blades

Why are Horizontal Axis Wind Turbines used other than Vertical Axis?