Not sure if this belongs here

Does anyone know if a tungsten-/copper+ saltwater battery have any significant charge if any? Willing to experiment myself, but don't want to waste money without asking first

I was reading that tungsten's redox potential was influenced by temperature and was wanting to see if you could charge the battery at high temperature to charge the tungsten with electrons, then discharge the battery at a lower temperature, and was wondering what the cheapest electrolyte/cathode would be to start experimenting with this hypothesis, is there a list of standard redox potentials by electrolyte or paired metals floating around? I'm definitely a learn by doing individual, I just wanted to know where to start the experiment.

Edit: now that I have watched a video on standard redox potential, I'm going to do some pen and paper calculations and potentially ask you to correct any misguided thinking
Last edited: Mar 5, 2020
Skyland

This isn't right. Why do you think tungsten's oxidation and reduction potentials are different? It's just one or the other direction for the reaction. The temperature dependence of electrochemical potential is given by the Nernst equation:
https://en.wikipedia.org/wiki/Nernst_equation
To a very good approximation, changing the temperature should not change the order of the redox potentials.

(There may be secondary effects for highly non-ideal solutions that dramatically change the chemical activity of the species at different temperatures--making the notion of charging a battery by changing the temperature a really fascinating idea--but this would be at least a Ph.D. project unto itself.)
Skyland

I did not think the the temperature would change whether the tungsten would be oxidized or reduced, I thought it would change the voltage potential, and I wanted to see if charging the battery at a higher temperature, and discharging it at a lower temper would have effects on the battery overall output, but, like it's been pointed out to me I should just be focused on learning the basics, so once my tungsten rods and copper pipe arrived, I made a salt water battery, and learned very quickly that my thoughts on the battery were wrong, with the common on tungsten the multi meter read -0.33 volts dc, which meant in a salt water battery the tungsten is the cathode, I was confused at first because my understanding of the table meant, I had sodium hydroxide and peroxide on hand, and I knew that a even dilute mixture would disolve copper, so I made another setup with the lye/peroxide solution, this time with common on tungsten the multimeter read 0.45 volts, very close to my original math, however the copper although it was being reduced, still oxidized, and black copper oxide precipitated into solution and blue copper hydroxide formed on the outside of the pipe which was different on the other battery because I had formed green copper oxide on the inside of the pipe being oxidized. ( Yes I realize that didn't need to be one sentence, if you met me you'd be annoyed cause I also talk like that) It was cool to see how diffrently the copper oxidized in each test and I was glad I learned a key piece of information on reduction and oxidation in Batteries. 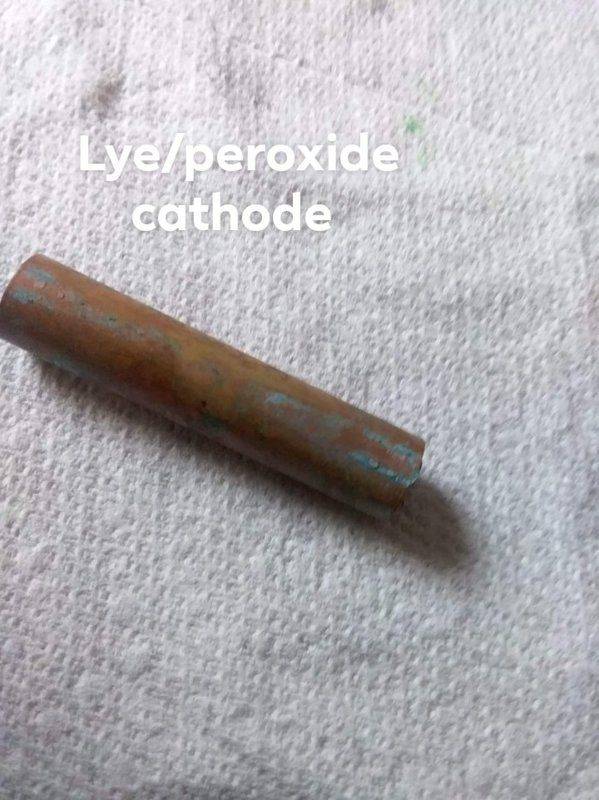 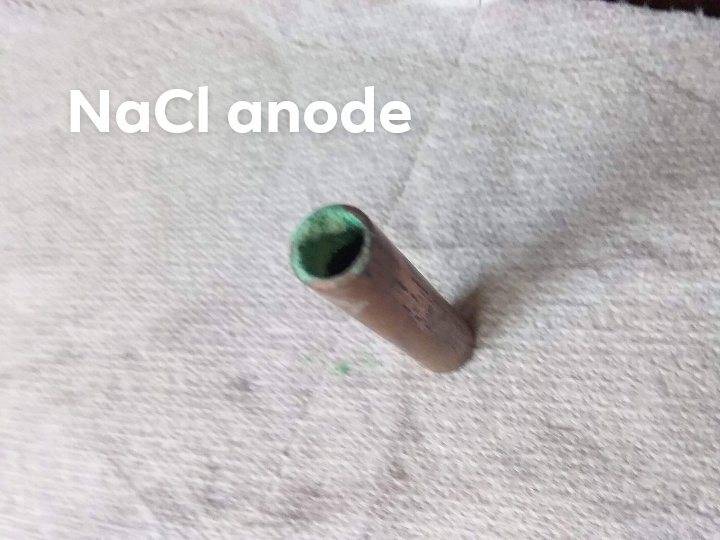 A few questions about anodization

Anode erosion of a moisture probe

Electroplating from tungsten via phosphate salt?

Why less originated area act as anode in a metal ?

Electrodeposition of copper -- Why are the anodic and cathodic Tafel curves different?