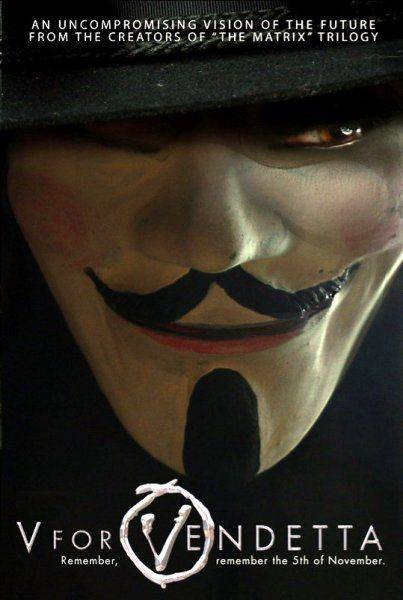 But let's hope that the movie matches the excitement of the trailer. I've seen just too many movies that had trailers that were far more interesting than the movie itself.

Here is the movie plot from IMDB.com: "In a story where Germany won a future World War and Great Britain is now a fascist state, a masked vigilante known only as "V" conducts guerrilla warfare against the government. When he rescues a normal young woman (Portman), she joins his struggle against the forces of oppression..."

It does sound interesting...I've always wondered how different societal norms would be had the allies lost World War II. To us, V seems like a hero as he fights a fascist government responsible for multiple counts of genocide. However, this does not change the fact that V's action are most certainly terrorist in nature, and thus his actions may not be entirely justifiable.

It's also interesting to see if the release date of the movie will be delayed to sometime next year, given that (from what I've heard) the movie depicts London landmarks being blown up.

Why is Hugo Weaving masked for this movie? Hmph, I guess the movie was not made with the sole purpose of cashing in on the attractiveness of its stars, unless audiences happen find a bald Natalie Portman sexy.
dduardo
Staff Emeritus

Actually she isn't bald in the beginning. It's only when she gets thrown in jail that they shave here head.

The reason Hugo Weaving is masked is because in LOTR he looked funny, almost out of place. I literally laughed my pants off when I first saw Hugo with elf ears. I was really hoping he would call Froto, Mr. Anderson.
Last edited: Jul 23, 2005
recon

Yeah, Hugo Weaving's career is probably doomed. Just too many people identify him with Agent Smith, so I guess he's going to have to play masked characters for the rest of his life.
dduardo
Staff Emeritus

It isn't so much that we identify him with Agent Smith, it is just that he has one of those faces.

Even when he isn't in costume he looks funny. I think it is the big forehead.
Last edited by a moderator: May 2, 2017
Gale

i can't get the stupid trailer to work, i can't hear anything....
hitssquad

i downloaded it, and i tried the lower versions, i just can't get it to work.
hitssquad

OK. I'm sure DDuardo and I can help you figure out what is wrong. Can you give us some clues? What are your system specs?
Share:
Share

Suggested for: V for Wachowski

For those familiar with V for Vendetta