http://www.nature.com/nphys/journal/vaop/ncurrent/full/nphys3178.html
Collisionless shocks can be produced as a result of strong magnetic fields in a plasma flow, and therefore are common in many astrophysical systems. The Weibel instability is one candidate mechanism for the generation of sufficiently strong fields to create a collisionless shock. Despite their crucial role in astrophysical systems, observation of the magnetic fields produced by Weibel instabilities in experiments has been challenging. Using a proton probe to directly image electromagnetic fields, we present evidence of Weibel-generated magnetic fields that grow in opposing, initially unmagnetized plasma flows from laser-driven laboratory experiments. Three-dimensional particle-in-cell simulations reveal that the instability efficiently extracts energy from the plasma flows, and that the self-generated magnetic energy reaches a few percent of the total energy in the system. This result demonstrates an experimental platform suitable for the investigation of a wide range of astrophysical phenomena, including collisionless shock formation in supernova remnants, large-scale magnetic field amplification, and the radiation signature from gamma-ray bursts.

The generation of cosmic magnetic fields has long intrigued astrophysicists. Since it was first described in 1959, a phenomenon known as Weibel filamentation instability—a plasma instability present in homogeneous or nearly homogeneous electromagnetic plasmas—has generated tremendous theoretical interest from astrophysicists and plasma physicists as a potential mechanism for seed magnetic field generation in the universe.

"Comparison with 3D particle-in-cell simulations and a first-principles theoretical treatment proves that the magnetic field generation in such flows is real, and quite efficient," said lead author Channing Huntington, a physicist at LLNL.

http://en.wikipedia.org/wiki/Weibel_instability
The Weibel instability is a plasma instability present in homogeneous or nearly homogeneous electromagnetic plasmas which possess an anisotropy in momentum (velocity) space. This anisotropy is most generally understood as two temperatures in different directions. Burton Fried showed that this instability can be understood more simply as the superposition of many counter-streaming beams. In this sense, it is like the two-stream instability except that the perturbations are electromagnetic and result in filamentation as opposed to electrostatic perturbations which would result in charge bunching. In the linear limit the instability causes exponential growth of electromagnetic fields in the plasma which help restore momentum space isotropy. In very extreme cases, the Weibel instability is related to one- or two-dimensional stream instabilities.

Consider an electron-ion plasma in which the ions are fixed and the electrons are hotter in the y-direction than in x or z-direction.

To see how magnetic field perturbation would grow, suppose a field B = B cos kx spontaneously arises from noise. The Lorentz force then bends the electron trajectories with the result that upward-moving-ev x B electrons congregate at B and downward-moving ones at A. The resulting current j = -en ve sheets generate magnetic field that enhances the original field and thus perturbation grows.

Additional insight into magnetic fields and filaments in space would be the key words.

So Weibel instabilities can create a seed magnetic field where none existed before, out of a plasma, and this might explain galactic magnetic fields. The experiment mentioned in the Nature paper seemed highly contrived,

(Then observing the ensuing Weibel instability seems even more complicated!)

Are we sure this arrangement emulates conditions found in galactic space?

Are we sure this arrangement emulates conditions found in galactic space?

I believe magnetic fields and filaments are found throughout galactic space, but I'm sure only out to about where Voyager is. I confess, I wear both a belt and suspenders. Discussion of the experimental contrivance and relevance to conditions in space might be found deeper in the paper, which is beyond my wallet.
Garth
Science Advisor
Gold Member

And mine! However the Phys Org article seemed to have read it:

Having developed a robust experimental platform and confirmed the generation of Weibel filamentation, the team envisions a broad range of follow-up experiments on OMEGA (Laser Facility) to test the magnetic field generation under conditions that are relevant to astrophysical systems (for example, in the presence of a pre-existing magnetic field, which may modify the instability growth). They also have begun a set of experiments at LLNL's National Ignition Facility, where larger, faster plasma flows are believed to produce even higher fields and the Weibel mediated shock formation will be fully mature. These experiments will reach conditions not previously achieved in a laboratory setting. 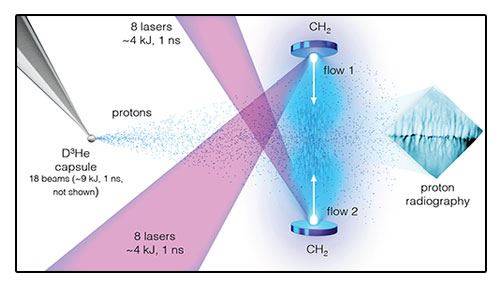