What exactly is Plasma?

I just recently came across a theorem known as Alfven's Theorem, and according to what he said Magnetic Reconnection is a violation of the conservation law of plasma physics. So I am just curious into finding out what plasma actually is, some define it as a ionized gas, but after reading I am starting to think that there is much more science involved with the reconnection theory and energized particles.
According to Jefferson Labs the definition of plasma is
"
http://www.pnl.gov/energyscience/06_99/art2.htm [Broken] is the fourth state of matter. Many places teach that there are three states of matter; solid, liquid and gas, but there are actually four. The fourth is plasma. To put it very simply, a plasma is an ionized gas, a gas into which sufficient energy is provided to free electrons from atoms or molecules and to allow both species, ions and electrons, to coexist. The funny thing about that is, that as far as we know, plasmas are the most common state of matter in the universe. They are even common here on earth. A plasma is a gas that has been energized to the point that some of the electrons break free from, but travel with, their nucleus. Gases can become plasmas in several ways, but all include pumping the gas with energy. A spark in a gas will create a plasma. A hot gas passing through a big spark will turn the gas stream into a plasma that can be useful. Plasma torches like that are used in industry to cut metals. The biggest chunk of plasma you will see is that dear friend to all of us, the sun. The sun's enormous heat rips electrons off thehydrogen and helium molecules that make up the sun. Essentially, the sun, like most stars, is a great big ball of plasma."
Last edited by a moderator: May 7, 2017

Plasma is an ionized gas consisting of positive ions and free electrons in proportions resulting in more or less no overall electric charge, typically at low pressures (as in the upper atmosphere and in fluorescent lamps) or at very high temperatures (as in stars and nuclear fusion reactors).

Nothing particularly wrong with the Jefferson Labs definition.
What was your question?

helium does form molecules, but not anywhere close to temperatures and pressures that you'll ever encounter, although the helium molecular ion is well known. Also the largest ball of plasma visible to the naked eye is probably VY Canis Major (variable star, only visible at its brightest) with a diameter about the size of Jupiter's orbit and a mass of maybe 18 times that of our Sun. Betelguese is an easier star to find (in the Northern Hemisphere) and is ~1000x the diameter of the Sun with about 12X its mass. Ionized gas IS plasma, but plasma is not (only) ionized gas. I know hardly anything about plasma physics, but I know enough to know how ignorant I am. With that warning I offer the following opinion: Since plasma is generally very hot, it's fair to say that many plasmas behave similarily to gas, but crystalline plasma is also known. There are probably a dozen "states of matter", but you'll learn about just the 3 common ones before high school. Others are plasma, bose-einstein condensate, neutron matter, the "matter" in a black hole (arguably), and various reduced dimensional states (usually found on solid surfaces). I agree with everything else Simon says, with the comment that physicists usually consider the fields (electric, magnetic, current, voltage) involved and often don't even mention what the ions are (chemically). Often, you'll have to dig to find out the composition of any given plasma (which may consist of atomic cations, molecular cations or mixtures of the two (along with electrons (and possibly other anions)). So, plasma isn't necessarily a "pure" state of matter with a simple composition. Anyway, a beginner can think of a plasma as something made at low pressure (partial vacuum) with voltage (say mercury vapor) or it can be made at high temperature simply by the thermal energy exceeding the ionization energy or it can be made at high temperatures (but below "natural" ionization energies) with voltage (or current) just as in the low P case. These all are vapors (or gasses) before they're ionized, so thinking about them as "ionized gas" isn't too far wrong. I think it would be an error to think of the composition of the Sun's core (which IS plasma, temperatures estimated at 15 million degrees K) as a gas - it's under enormous pressure and has a density of 110 g/cc while the densest element (at room temperature and pressure) is 23 g/cc. I have no idea what its physical behavior would be (we couldn't contain it in the lab to study it) (but see Fusion reactors)
Futurestar33

I am trying to figure out the actual state of matter plasma is whether if its a liquid or a so called "ionized gas".
ZapperZ
Staff Emeritus
Science Advisor
Education Advisor
Insights Author

Futurestar33 said:
I am trying to figure out the actual state of matter plasma is whether if its a liquid or a so called "ionized gas".

It is "ionized gas".

Assuming that you're not talking about the plasma in your blood, I am not sure why this is that difficult to determine.

Oh no no Its not difficult to understand I am just writing a paper about something else currently and just thought I would have a conversation about plasma. That is all, I am writing about Magnetic reconnection, and magnetic reconnection is is actually disobeying Alfvens Theorem, in where he states that "
every motion perpendicular to the field of the liquid in relation to the lines of force is forbidden because it would give infinite eddy currents. Thus the liquid matter must be fastened to the lines of force."
It was just interesting and I am just want to have something to read and respond to while I take breaks in between.
ProfuselyQuarky
Gold Member

Futurestar33 said:
I am trying to figure out the actual state of matter plasma is whether if its a liquid or a so called "ionized gas".

If it was a liquid, it would be called so and not have a different name The only difference between gas and plasma is that the particles within plasma have approximately equivalents numbers of both positively and negatively charged ions. There are also free electrons that aren't even bound to atoms. We can think of plasma as being “charged gas” while “real” gas is neutral gas, in a sense. Unlike neutral gas, plasma is greatly influenced by both the magnetic and electric fields.
Dotini
Gold Member

ogg said:
Since plasma is generally very hot, it's fair to say that many plasmas behave similarily to gas, but crystalline plasma is also known.

I was intrigued by your reference to crystalline plasma, an interesting concept. After looking up electrophysiology, nonthermal plasma and cold plasma, I ran across this on complex plasma:

"scientists could confirm that complex plasma is actually a new state of so-called soft matter, which includes granular materials, colloids in liquid suspensions, and others."

I suspect "others" might include gels, and that "colloids in liquid suspensions" might even seem to resemble cytoplasm. 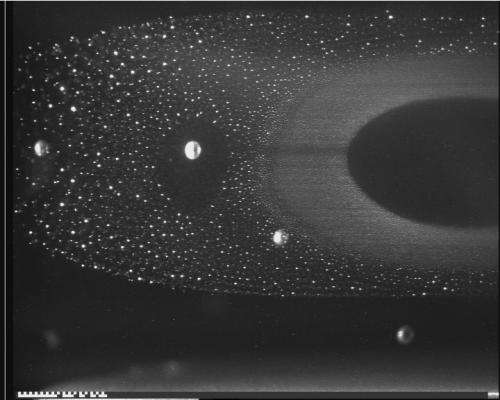 This picture was taken during the last experiment with PK-3 Plus on the International Space Station. You can see some "large" particles of about 1 mm in diameter, which were © MPE

http://www.space.com/32866-explosive-magnetic-reconnection-storms-spotted-nasa-probes.html
For reconnection to occur, plasma has to become de-magnetized. The final critical stage in this event happens in a relatively small patch of space known as the electron-dissipation region. "The spacecraft passed directly through the electron-dissipation region," Torbert said in a statement.

"We now have a 'microscope' that for the first time allows us to see reconnection in action."
The data showed a drop in the magnetic field to near zero, ions flowing in opposite directions, accelerated electrons, a strong electrical current and an enhanced electric field — all signs that the spacecraft had entered an electron-dissipation region, the researchers said.

However, the key signature of reconnection was a spike detected in the electric power generated by the electrons, the researchers said.

"This was the 'smoking gun' for reconnection," Burch said in a statement. "It was theoretically predicted, but never seen until MMS." 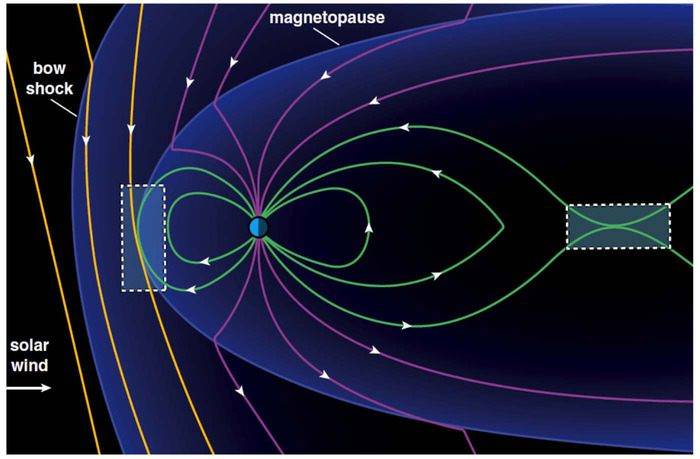 I came across this while looking into Jupiter's Magnetosphere.

Related Threads on What exactly is Plasma?

What is meaning of w in plasma permitivity,exactly?

G
What is Plasma Flow?

What is plasma sputtering?