What exactly is the potential difference between phases in 3 phase power distribution?

I think it is easiest to visualize using a vector diagram. Does the following help? 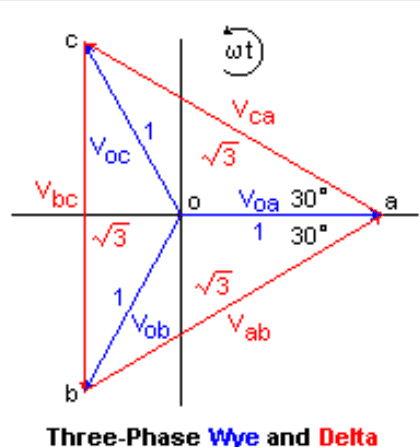 oscarrod5 said:
at that instantaneous point, the potential difference looks to be 0.

Yes. Have you taken into account it actually is not different from the case of a single phase and neutral: you can also find the instantaneous point at which potential difference is zero?
Tom.G
Science Advisor
Gold Member

oscarrod5 said:
what exactly the potential difference is between any 2 phases in 3 phase power.

Here in the U.S. the 3-phase to residential areas is often 16kV between phases (DELTA connected). One phase of this is then stepped down to the usual 240V centertapped for residential use.

For larger apartment buildings with an elevator and air conditioning (and for larger restaurants) the 16kV 3-phase is stepped down to 120/208 3-phase/4-wire (WYE connected). This causes some complaints about electric stoves not heating as fast as they 'should.' Of course this is because of the 208V feeding a 240V stove. Try explaining that to an upset housewife!

Medium size industrial plants are often fed with 416/240 3-phase/4-wire with a 240/120V transformer on the customer site. This has its own quirk in that the transformer often has a fuse mounted right on the transformer, which is behind a blank panel on the circuit breaker box. If the maintenance guy hasn't run across this before, the lights may be out for quite a while during troubleshooting.

277/480 Wye is quite common in US industrial settings. My last company sold Lasers that used this feed and it was seldom a problem in any sort of place that would want a big laser. Everyone overseas had to buy an autotransformer though. The cooling water, OTOH, was always a PITA for everyone.
Windadct

480/277 is the US Industrial Standard - I only remember seeing 440 in OLD scott connected arrangements in Philly.

While the vector diagram are helpful - I think they are best as the second or final step to looking at this. The 3 Phase waveform is the good first step - a vertical line on this diagram shoes the REAL TIME potential difference for each connection.
dlgoff
Science Advisor
Gold Member

anorlunda said:
I think it is easiest to visualize using a vector diagram. Does the following help?

You can use the standard Mathematics expression to find the Potential Difference. notably, the difference between the two Sine functions. Sin A - Sin B = 2 x Cos [(A+B)/2] x Sin [(A-B)/2]
We used to recite that as " sine minus sine equals two cos a half sum, sine a half difference." (With similar expressions for sin plus sin, cos plus cos and cos minus cos)*

Suggested for: What exactly is the potential difference between phases in 3 phase power distribution?

What does the 'power' vs 'time' graph look like for a 3 phase AC supply?