Who Do You Look Up To?

lisab said:
Lots of people. For example, Om, because he cured himself .

Well his story involves activities we don't support here, so you'll have to ask him. Maybe he will share. It's a great story!
OmCheeto
Gold Member

lisab said:
Lots of people. For example, Om, because he cured himself .

Hmm.... I never did confirm that I cured myself.

I only knew that, after 9 months of suffering, my symptoms went away, after taking a drug, that the literature said, would cure me.

I had lots of time to study the literature.

I don't mean to belittle the doctors. They've got thousands of patients, and millions of diseases to know about. I only have to worry about the one, causing me distress, at the moment.

I do look forward to seeing my new doctor* this month, his mouth was wide open when I told him the story.

-------------------
*I ran into him a month after I "cured" myself. A totally random, sitting at the bar kind of thing. I ran into him again about 2 weeks ago, and he said he'd be my doctor. Though he said he didn't remember me. I smiled.
Mentalist
"Look up to..." implies, "role model", implies, "not being oneself", this means, "your value as a human is less than that of the one you look up to", which implies, "they are better than you." Aside from that, I know it is another human to which many if not most (possibly all) humans have faults or flaws. Why would I want to look up to another thing that is almost as imperfect as I am? Why would I even bother trying to model myself after something like a human? Where is the sense in that? I cannot be that person as I wasn't born that person so I am not going to die wanting and trying to be someone else. If I were to do that then it would make more sense for me to try and become a sea turtle. If I could change who I was, I certainly would choose to be a tree or a sea turtle, not another human. But the latter is an asinine notion! Just like trying to model yourself after another person. That is my opinion, but that is why I don't model myself after another. I just try to be a better person based on what I think "better" is.
OmCheeto
Gold Member

I look up to Mike's Mother.

She endured, what no mother should have to endure......

And she used her son's death, as a lesson to others, rather that being bitter about it, and pointing fingers.....

I spent time in the same area Mike lived, when I was about his age.

I owe my life to Mike's Mother.

I look up to her.​
Drakkith
Staff Emeritus
Science Advisor

I look up to Conan the Barbarian. :) Seriously, I find Steve Jobs an inspiring person.
ChiralWaltz

StevieTNZ said:
It'd be interesting to see who people look up to.

I look up to Giorgio A. Tsoukalos. I wish I could do a PhD under his supervision.

I also look up to my 2004 and 2005 High School Classical Studies, and Computing, teachers. 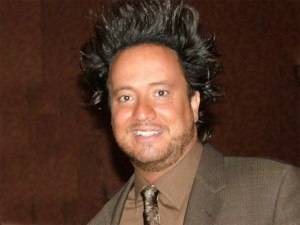 On the up side, he has some epic hair.
CFDFEAGURU

Astrum said:
On the up side, he has some epic hair.

Even if it was still the 80's he would be the extreme.
Bacle2
Science Advisor

Giorgio Tsoukalos has a PHD? I thought a PHD diploma would be too large to fit inside of a cereal box.
Evo
Mentor

Bacle2 said:
Giorgio Tsoukalos has a PHD? I thought a PHD diploma would be too large to fit inside of a cereal box.


Tsoukalos is a 1998 graduate of Ithaca College in Ithaca, New York, with a bachelor's degree in sports information and communication.

I guess they did not have a college of crackpot.
Evo
Mentor

Julio R said:
I guess they did not have a college of crackpot.

Tsoukalos is a 1998 graduate of Ithaca College in Ithaca, New York, with a bachelor's degree in sports information and communication.

Related Threads on Who Do You Look Up To?

Who do you trust?

G
Who do you respect
2

Who do you hate
2

Who do you think you are?

Do you ever talk to girls who rejected you?

L
Who do you want to see live?

Look who came to visit