Why don't we see quantum weirdness in everyday world?


tarekatpf said:
Since, we and everything else in our real world are made up of electrons, protons, and electrons, protons, and atoms show quantum weirdness, why don't we ever see such things to happen in real world? Such as, why don't we see part of an apple suddenly disappearing into thin air? Why do classical mechanics never fail to predict motion of things bigger than atoms?

Quantum physics is based on unpredictability. Image that you are watching an archer shoot an arrow and you don't know if your going to see the beginning, or end. You will randomly appear after he/she already shoots the arrow. Quantum physics can only be measured during a single point in time and space. We only perceive the present because that is the rule of our dimension.
maajdl
Gold Member

maajdl said:
It is precisely the fact that quantum weirdness isn't seen everyday, that makes it weird.

You mean in the trivial sense that everydayness is, by definition, the opposite of weird?
So rephrase the question to this definition: how come the uncommon effects of QM are not more apparent on everyday scales?


lightlamb said:
Quantum physics is based on unpredictability.

... not exactly.
Is it not rather based on varying levels of predictability?

But even if we accept that - the question under consideration is how things get to be as predictable as they are despite this underlying unpredictability.


Image that you are watching an archer shoot an arrow and you don't know if your going to see the beginning, or end. You will randomly appear after he/she already shoots the arrow.

Then you know you cannot see the beginning but you may see the end.

[Grammar Nazi says: After he/she shoots the arrow or after he/she has already shot the arrow?]


Quantum physics can only be measured during a single point in time and space.

Quantum physics cannot be measured at all - any more than mathematics or an idea can be measured.
You measure physical properties.
Measurement in QM seldom happens at exactly one point at one time... our equipment is neither zero dimensional nor instant.

I know this seems pedantic but one of the banes of the science world is when people go out of their way to play-up the weird mystery of science by using unclear terms.


MightyKaykoher said:
I think ( but may be wrong ) quantum mechanics allows for practically anything to happen.

Time alone cannot make a purely statistical event certain, no matter how likely it is, unless it started out with a probability of 1. But you are thinking in terms of "infinite" time. It is not clear that the Universe has an infinite amount of time to play around with - we certainly don't. "Everything is possible with infinite time" makes a trite aphorism but it is otherwise useless.

What we usually care about, is some sort of functional infinity - like the length of time before the research grant can no longer be reliably renewed. We try to propose physics which has a chance of being verified in this sort of time frame.

The apple vanishing due to quantum uncertainty in the position of each of it's components is something that cannot happen because of the quantum mechanics of the apple. Its like each bit is keeping track of the other bits through the EM interaction - so the bits don't get to wander off. You also won't get it to exhibit wave-like properties in bulk. Fire it at narrow enough slits and you get to demonstrate it's sauce-like properties instead.

Have the three of you actually read the preceding thread at all?
bhobba
Mentor
Insights Author

tarekatpf said:
Maybe I need to know more about both, and probability first.

I would look into something called the Central Limit Theorem:
http://en.wikipedia.org/wiki/Central_limit_theorem

As the size n increases the variance of the mean (which is a measure of the spread) decreases, so that for very large collections the behavior approaches that of the average (mean is just a fancy word for average).

Right now unless you have studied probability it likely doesn't make a lot of sense. But as you learn more, what is going on will be clearer. For now just keep in mind that there are powerful theorems at work that explain this sort of stuff.

Well there are some things that by the nature of things are impossible such as gravity suddenly reversing or the fine stricture constant suddenly changing - as far as we can tell at this juncture anyway - who knows what future research may bring.

However it is possible, for example, that all the molecules in the room will move in the same direction and accumulate at one side. If you wait long enough in principle it will likely happen and for an infinite amount of time its a dead cert. But this is just one of the weird properties of infinity. Since infinity is simply a concept useful in certain situations, and doesn't actually exist, its simply a weird property it has - like the very definition of infinity - that it can be put in a 1-1 correspondence with a proper subset. No object out there is like that. It's simply a conceptualization - good for getting a handle on some things mathematically - but beyond that - not really of much value.

Simon Bridge said:
Then you know you cannot see the beginning but you may see the end.

[Grammar Nazi says: After he/she shoots the arrow or after he/she has already shot the arrow?]

You are correct.
DevilsAvocado
Gold Member

tarekatpf said:
That's true, and that's my point. Random movements of any number of molecules remain random. They never form something stable, like a ball of air molecules.

Air is a little bit too "opaque" to discuss, since it's a mixture of gases, so let's just focus on oxygen; all matter is composed of atoms which, to form molecules, uses chemical bonds: 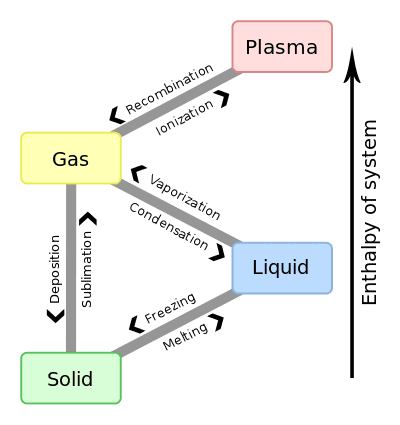 So, how can we make a ball of this stuff?? That’s easy, just use the Leidenfrost effect:

As you see, as a liquid its (para)magnetic properties become visible, and this can only be fully understood via QM properties of spin = quantum weirdness in everyday world!


tarekatpf said:
How did such stable stuff like stars, galaxies and planets could originate from molecules/ atoms that are apparently hopping around?

This is obvious, isn't it? It looks like you maybe are a little bit 'confused' about the four fundamental forces of physics:


tarekatpf said:
Thanks. The idea that matters keep switching places usually between a long distance ( say a mm ) makes me kind of grow a disliking for the universe.

Nooo, never dislike the whole universe, you're an integrated part of it!

You must understand that in QM there's a "wave–particle duality", and the electrons you want to throw in the wall must – before they are measured – be treated as a wave, or better, as a wave packet:

As you see, this is not a localized point/particle but a spread out wave, which can interact with itself and the environment. There are different interpretations on what this wave really is, if it exist or not, if it's 'just' a mathematical representation, etc. Anyhow, it all works beautifully and perfectly well in practice, when doing experiments and construction electronic gadgets, computers, etc.

Hopefully this documentary could help you get the basics:

This thread has run its course.
You must log in or register to reply here.

Related Threads for: Why don't we see quantum weirdness in everyday world?

Is Quantum World weird because we can 'see' higher dimensions?

I don't see what's weird about the double slit experiment
2

I Is quantum weirdness really weird?
10

Quantum mechanics is not weird (locality and non-locality weirdness)
7