Why is ancient astronomy right?

You won't see that much with the naked eye however.
sophiecentaur
Science Advisor
Gold Member

Technically, though, the ancients must have been really on the ball. Distances had to be done with trigonometry - as with a rangefinder and with a maximum baseline of hundreds of km. As far as I can estimate, this would need measurement of the difference in angle of two views of, say, the Sun against the 'fixed' stars from two terrestrial sites. A baseline of 150km and the Sun's distance being 150 X106 km would give a difference in angle of 10-6 radians, which is less than 1" of arc. Good stuff, that you would find difficult to do with stuff out of your garage. (No Scientific Equipment supply shops in those days.)
EDIT: The Sun was a daft example, of course. You can't see any fixed stars when the Sun's out. But you could do it with Mars or Venus.
Last edited: Jul 24, 2016
mfb
Mentor
Insights Author

The distance of Moon got estimated via triangulation with a somewhat reasonable accuracy. The sun is too far away for that. In principle you can use the Earth/Moon baseline if you estimate the fraction of the visible part of the moon that gets sunshine (it is a bit more than 50% if the sun is just at the horizon for you and moon is directly above you), but that method needs telescopes and ideally cameras to be reliable. The speed of light plus precise timing of Jupiter moons and later previously Venus transits (for triangulation) gave more reliable estimates around ~1650-1750.
Last edited: Jul 24, 2016
sophiecentaur
Science Advisor
Gold Member

Interesting and it resolves my problem with such tiny angles - but they didn't have telescopes and the early instruments were not too good.
They must have used many different measurements of as many different astronomical objects as they could. Their advantage was that they had a lot of time to play with.
Once they had the Sun's distance, they could invent the Astronomical Unit and could use parallax for finding some of the bigger distances from different places in the Earths orbit. An impressive network of information and measurements which pulled itself by its bootstraps from relatively small distances to larger ones.
I was gobsmacked when I learned how the oscillation rates of the Cepheid variables would tell you the absolute magnitude and that would give you the distance of amy variable you saw from its relative magnitude. But that was all relatively recent. It wasn't until the 1920s (iirc) that other galaxies were recognised as being outside of our own. That's nearly in my lifetime - at least my Dad's lifetime.
mfb
Mentor
Insights Author

sophiecentaur said:
Once they had the Sun's distance

They did not have that. Here is a summary table. All the Greek estimates were not better than guesses. Wendelin (1635, Earth/Moon baseline triangulation) and Horrocks (1639, size of Venus during transit) were the first estimates that were somewhat reasonable - both got the distance wrong by a factor 2.

Huygens got a good estimate in 1659, but probably more based on luck than on actual precision.

Cassini and Richter used the Mars parallax in 1672, their value was just 10% off. The venus transits in 1761 and 1769 then allowed to narrow down the distance to sun to ~2% uncertainty, and the next set of transits 1874 and 1882 together with abberation and the known speed of light brought it down to 0.1% uncertainty.

Modern radio astronomy allows to measure the distance with a precision of meters.
1oldman2

And then there are these guys. http://ircamera.as.arizona.edu/NatSci102/NatSci102/text/extmayaastronomy.htm
https://blog.udemy.com/mayan-astronomy/
jim mcnamara
Mentor

How about this: Get a handle on being able to see the planets yourself.
There are cell phone apps for this. If you live in a big city there will be only a few nights every year that will allow you to see much. And you may have to get out of town. These apps point you in the correct direction and help you locate planets and other objects like the Andromeda nebula.

Sky Free is one for iPhone, for example. Here is a list of free apps:
http://heavy.com/tech/2015/09/top-5-best-free-astronomy-space-stars-apps-for-iphone-android/
John Lagnese

There was much less air pollution and almost no light pollution. There were also fewer distractions, so the sky was a bigger attraction!

Mars and Betelgeuse were visibly red, not so much now.
Charles Kuester

Lucivaldo said: How come i haven't been capable of pointing out any planets on my own? and the only one planet that i was pointed to looked allot like a normal star in the same white seeming color. What colors do you see the planets you pointed out in?

To the naked eye all the planets look just like bright stars. The ancients noticed they moved in relation to the "fixed" stars. The word planet comes from the greek word for "wanderer." They move slowly enough that you don't notice it unless you are paying close attention. The color difference can be rather subtle too. Venus is definitely whiter than Saturn and Jupiter and Mars does have a reddish cast.
ebos

Lucivaldo: Perhaps you think the planets look like, well, like the planets we are shown on photos from telescopes, ie; Jupiter with a red spot, Saturn with rings, etc, etc., but, no, the planets all look basically the same as the stars. There are a few slight differences, however. Mars is noticeably redder, Venus is quite bright and so is Jupiter (depending on their distance from us, of course) and they move very slowly across the sky. You need to watch them and track them for several weeks in order to notice any apparent movement. Also, don't forget, the ancients watched and kept very close track of the stars daily for thousands of years. Their movement was extremely important to their religions and their religions were often passed down to other empires. The stars were first observed by the Sumerians and their charts and observations were later seamlessly adopted by the Akkadians, Egyptians and Babylonians among many others. The movements of the stars, planets, the moon and the sun was so important to these peoples' religions that their kings would be executed according to what phase and position the moon was in for example (until the kings finally smartened up). The rising of the star Sirius usually coincided with the annual flooding of the Nile River and when, because of the precession of the equinoxes (look it up), it failed to rise on time eventually, it caused complete havoc and revolution among the Egyptians because their whole religion needed to be rewritten. So, like the man says, "Keep on looking up."
1oldman2 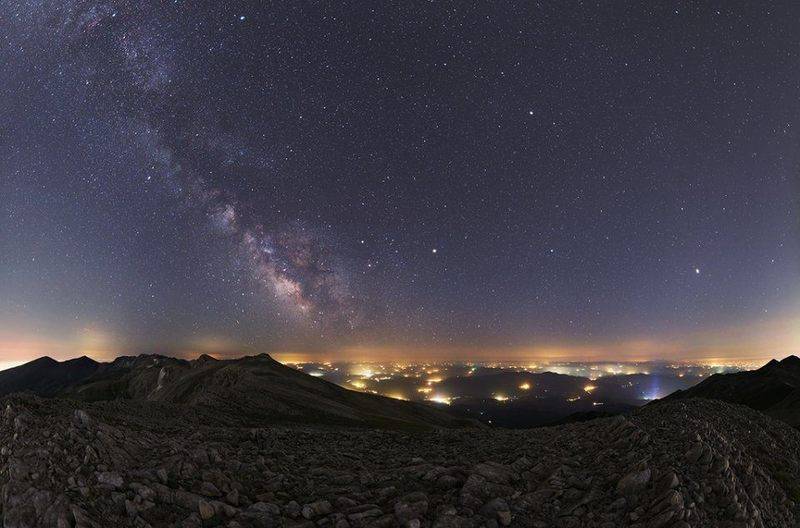 Okay then, this is a pretty good example.
1oldman2

Here is mercury, a good example of a "star" wandering. 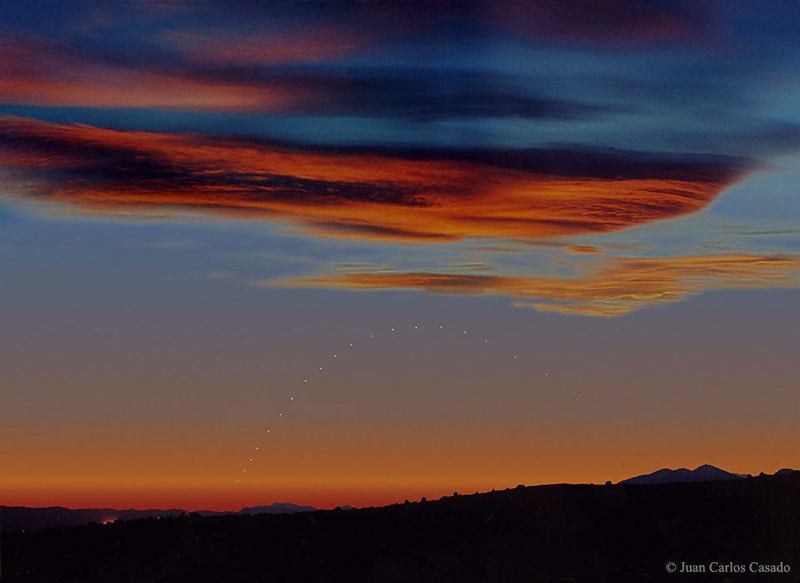 Nice picture but it is not 'as seen'. The clouds would have moved much more than Mercury during the time for the multiple exposures.
I am still having to come to terms with the difference between the astrophotographs that get published and what you actually see. Lots of scope for artistic expression - even if it's just the false colour that's used to accentuate the features of astronomical objects.
1oldman2

sophiecentaur said:
Nice picture but it is not 'as seen'. The clouds would have moved much more than Mercury during the time for the multiple exposures.
I am still having to come to terms with the difference between the astrophotographs that get published and what you actually see. Lots of scope for artistic expression - even if it's just the false colour that's used to accentuate the features of astronomical objects.

lucivaldo said:
Let's be honest...Why were planets visible to the ancient people and not to us humans any longer? Is it because the planets distanced? How can some planets distance themselves while others don't? It's said that light pollution has affected the visibility of planets in the sky, whereas there still reports of people seeing at least one planet in the sky. So how come ancient astrology was on right before the telescopes?

Have you read Newton? Copernicus? Here is a book written actually for entertainment purposes, but is educational as well http://www.gutenberg.org/files/52709/52709-h/52709-h.htm#Page_466 Ive posted a link starting with the chapter on Astronomy. Title of book is Popular Scientific Recreations, by Gaston Tissandier, I didn't check the pub. date but it is over a century old at least. Here is another GREAT book: Copernicus, Brahe, all of the greats are in here http://www.gutenberg.org/files/2298/2298-h/2298-h.htm it gives pretty good descriptions of the hows whys wheres and whatnots. You have a curious and inquiring nature, which is a sign of INTELLIGENCE. It asks questions as to how and why. This tells us you are not a dolt and simply toss up your hands and don't care. What concerns me personally is the fact you simply tossed the question out there, but haven't researched for the answers on your own. The answers are not hidden in some obscure and lofty database accessible only by using a special key, or permissions or need a credit card to access via a paywall. The BEST books are free, as the newer ones are so conciliatory and like to dangle the answers using obscure and confusing terminology, just the way Soros likes it, only the elites are supposed to know these things, it seems (don't knock me, my uncle wrote the stuff for SCANs, so I know more about it than your regular person might)
The last link I supplied you even goes into details of Newton's younger days :""In the house where he lodged there were some female inmates, in whose company he appears to have taken much pleasure. One of these, a Miss Storey, sister to Dr. Storey, a physician at Buckminster, near Colsterworth, was two or three years younger than Newton and to great personal attractions she seems to have added more than the usual allotment of female talent. The society of this young lady and her companions was always preferred to that of his own school-fellows, and it was one of his most agreeable occupations to construct for them little tables and cupboards, and other utensils for holding their dolls and their trinkets" Isn't that the cutest thing??

There are TONS of easy to read, yet not dumbed down titles in Gutenberg, MAKE USE OF THEM.

Related Threads on Why is ancient astronomy right?

Why is Jupiter so bright right now?
2

Why 24 hours for right ascension?

I How common is automation in Astronomy?

I What is column density in astronomy?

Is astronomy hard for nothing?

I How ancient found that sun is too far from earth?