Conventional Wind turbines now have 3 blades. I assume this is a matter of average air pressure. 1)Would a future wind turbine working on Mars with about 1% of Earth’s air pressure need to have many more blades?

2) Would all those Victorian windmills have been any more efficient with 3 sails instead of the traditional 4?

I think you will find that blade length is more important than number of blades. 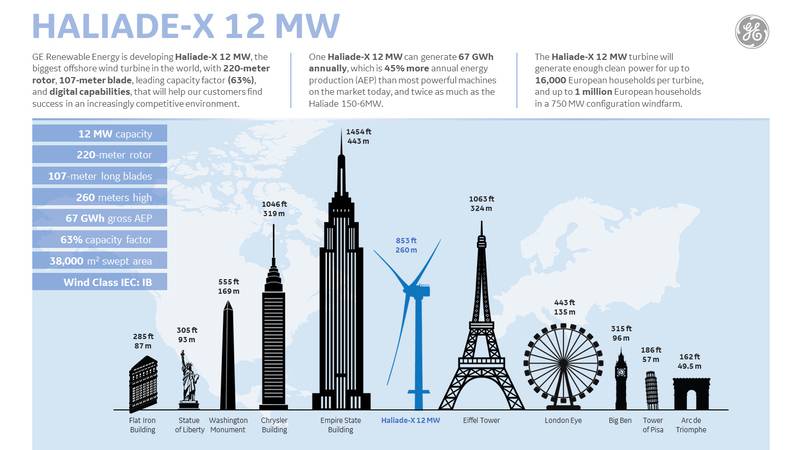 On Mars, they could be even higher.

More blades yield more power, but less power per blade.
So at some point (around 3 given what I see deployed), it is better to add a new windmill than to add just a propeller.

The surface of Mars has about 1/3 Earth's gravity. So one might expect taller windmills allowing for longer blades. But, of course, there is less industry on Mars - so perhaps a taller windmill (or any windmill) might not be practical right away.

The lower Martian air density will reduce the amount of power that can be draw from the wind. But the blades would still turn at the same rate given the same wind speed on Earth. The difference would be with the electric generator. It would have to be toned (or geared) down to offer less resistance - this producing less power.

That power can be drawn from the Martian wind has already been observed. After one of the lander dropped, its parachute was photographed a few day later still inflated from a steady wind.
CWatters
Science Advisor
Homework Helper
Gold Member

jeffinbath said:
Conventional Wind turbines now have 3 blades. I assume this is a matter of average air pressure.

No. As I understand it 2 blades would be more efficient than 3 but they suffer from more vibration or resonance issues thsn a 3 blade. Something like that. Ask Google.
russ_watters
Mentor

Airflow through a fan or turbine in a duct is at a constant velocity and varying static pressure, so velocity times force (pressure times area) works well. But it's generally more useful to think of a wind turbine as affecting a change in kinetic energy of the air, since the static pressure is constant everywhere.

What happens across a wind turbine is the flow isn't a uniform cylinder, it's an expanding funnel, and the decrease in velocity corresponds with a transfer of kinetic energy. See:
https://en.wikipedia.org/wiki/Betz's_law


Wind turbines need to make that funnel shape happen, and a certain combination of RPM, blade size and pitch make it work. While it may seem counter-intuitive, adding blades doesn't really help; it isn't like the turbine is missing some of the air. The air works more as coherent mass than you might realize.

Now all that said, I'm not sure what the vastly lower air pressure (more than 99% lower) will mean, but I suspect blade design is more a function of velocity and area than density. In either case, because the air density (and thus available energy) is so low, it probably isn't worth putting much effort into figuring it out. Solar is the much better option.
Al_

Solar is the much better option.

Yes, unless you are trying to make an electric generator on Mars.
russ_watters
Mentor

Al_ said:
Yes, unless you are trying to make an electric generator on Mars.

I'm just thinking of reasons why you might want a wind turbine.
btw, the real reason is that a 2-blade has one blade in slower air nearer the ground, hence vibration.
With three blades, smoother torque.
russ_watters
Mentor

Al_ said:
I'm just thinking of reasons why you might want a wind turbine.

Ok, have you actually thought of any? What are they?
sophiecentaur
Science Advisor
Gold Member

jeffinbath said:
2) Would all those Victorian windmills have been any more efficient with 3 sails instead of the traditional 4?

Constructional issues would probably have made four blades the best for Victorians. I'd imagine that the friction in those mechanisms would have been a bigger problem than aerodynamics, too. It's hard to be very subtle with cast iron. (Except in IC engines, perhaps).
dRic2
Gold Member

russ_watters said:
probably isn't worth putting much effort into figuring it out.

Maybe one can try to exploit this phenomena (just for the fun of thinking about it):


wikipedia said:
The main component of the atmosphere of Mars is carbon dioxide (CO2) at 95.9%. Each pole is in continual darkness during its hemisphere's winter, and the surface gets so cold that as much as 25% of the atmospheric CO2 condenses at the polar caps into solid CO2 ice (dry ice). When the pole is again exposed to sunlight during summer, the CO2 ice sublimes back into the atmosphere. This process leads to a significant annual variation in the atmospheric pressure and atmospheric composition around the Martian poles.

I've read that this "wind of CO2" can reach ##400km/h## (from the Italian page of wikipedia). In the end I don't think it would be useful, but it is a very fascinating phenomena.
sophiecentaur
Science Advisor
Gold Member

Yeah and so can the abrasive dust!!!!

I was skeptical about it, but at least I thought it deserved a mention

Efficiency (and therefore power capability in a given environment) of a wind turbine is largely independent of blade count*, assuming an optimal design. All that is required to extract maximum power is that you need to interact with all the air passing through the rotor disk. With fewer blades, this is achieved by spinning the turbine faster relative to the incoming wind, so all air still passes within a relatively close distance of a blade and interacts with it. Modern wind turbines use a 3 blade design for a few different reasons.

One major factor is that 2 bladed turbines are prone to a fairly large oscillation in loads at the hub and nacelle during operation. This happens because there is nearly always a wind shear near the ground, so when the blades are vertical, there is a large torque caused by the top blade encountering higher wind speed than the bottom blade, and therefore having a much higher thrust load. However, when the blades are horizontal, this load doesn't exist. Because of this, twice per rotation, this torque is applied and then released to the nacelle. A 3 bladed turbine is always subject to the wind shear, so it tends to have more of a static load rather than these large oscillations. There are methods to mitigate this (you can research teeter connections if you're interested), but this is a problem that 3 blades solve.

Also, noise is strongly dependent on blade tip speed, and a lot of modern wind turbines are noise constrained by regulations. 3 blades enables a significantly lower tip speed (33% lower) than 2 blades for the same power extraction, reducing noise emissions from the turbine. Adding more blades would of course continue this, but you do start to get diminishing returns

One benefit you do get by going to more blades and higher solidity (proportion of the rotor area obscured by blades) is a large increase in static or low RPM torque. This is why the classic American "windmill" you see all across the great plains for pumping water in the US has so many blades - it enables it to start easily, even in low wind, and have plenty of torque to start with the load attached (so no complex clutching mechanism is needed). Similarly, the 4 blades and high solidity of the Dutch and northern European windmills would do similar - they would have plenty of torque at low RPM, which would probably be beneficial for milling, and maximum power and efficiency was probably not a concern. However, for power generation, you want relatively few, slender, high speed blades, as you can control the generator torque to ensure that the turbine is able to start, and you want to maximize power output and minimize cost and materials.

*For the truly nitpicky, there is a slight blade count dependence, and you lose a couple percent efficiency with 2 blades compared to 3, but this is pretty minor, and nobody would decide on blade count for this reason alone.
Share:
Share

Wind turbines turning in no wind?

I Pinwheels for Wind turbines? In class, pinwheels proved most

Why do Wind Turbines have such large blades