Note: if you want to avoid opening all the image links below separately, you can go to my webpage http://www.physicsmyths.org.uk/wmap.htm which is essentially identical to this post

The Wilkinson Microwave Anisotropy Probe (WMAP) is a satellite carrying a twin radio telescope for measuring the anisotropy of the Cosmic Microwave Background (CMB) (Fig.1 below) . The particular design of a dual instrument has been chosen in order to reduce the signal noise and therewith effectively increase the sensitivity and stability of the instrument. This is achieved by not measuring the intensity (temperature) of the microwave background for each telescope A and B separately, but only the difference signal I(A)-I(B). If one makes a number of measurements in different directions, the actual intensities can then be retrieved by solving a corresponding set of equations (this yields the sky map shown in Fig.2 ). 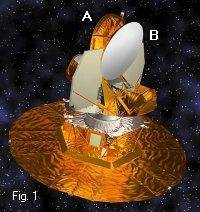 The differential signal itself can be analyzed as well and examined for instance with regard to any non-random features of the fluctuations visible in the sky map. Fig.3 below shows a corresponding spectrum of the scales of the fluctuations in the map, apparently indicating a pronounced peak at 1 deg and a smaller peak at 0.3 deg (the theoretical curve (red) shows further peaks which do however not come out clearly in the data) (see http://map.gsfc.nasa.gov for more information).

A crucial element in the interpretation of the data is now the beam profile (window function) of the telescope, as it determines the angular resolution of the measurements. NASA quotes the resolution with 0.3 deg (average of V and W bands) which in itself should already raise some suspicion as this is rather close to the features visible in the data. The detailed profile of an individual beam for the individual channels is shown in Fig.4 below (taken from the paper by http://lambda.gsfc.nasa.gov/product/map/pub_papers/firstyear/beams/wmap_window_func.pdf (Fig. 2 there)).

This has been obtained by measuring the transit of a point source (Jupiter) through the beam (for the different channels) and essentially the same profile is also used for the difference signal (Eq.(11) in the paper, which is basically a simple average between the two beams correcting for slight differences between the two channels). However, the cosmic microwave background is essentially uniform and fills the whole beam. Therefore, the difference between the two channels vanishes in zero order and only statistical deviations from this zero signal are being measured. If one assumes that actually a large number N of randomly distributed point sources fills each beam, the statistical variance associated with this is √N. The beam profile for the differential signal is consequently not identical with the profile of the single beam but given by the square root of the latter (i.e. a function exp(-x²) would transform into exp(-0.5x²) ) and the resolution would be only half as good. As a consequence, minor off-center details of the beam profile become suddenly much more pronounced: a portion of the beam with a relative weight of 0.1 in the individual beam has now a weight of √0.1=0.3 for the difference signal (irregularities in the single profile in Fig.4 reach up to a level of 0.1 in the W-channel and, coincidence or not, the ratio of the two main peaks in Fig.3 is about 0.3).

It is therefore likely that the power spectrum (Fig.3), allegedly proving certain features of the Big-Bang Theory, is in fact only an artefact of the data analysis showing features of the beam profile, but has nothing to do with the CMB at all.

By the way, I emailed one of the persons involved with the experiment about this and only got the answer 'I believe we are doing things correctly'.

Note: the above is a copy of my webpage http://www.physicsmyths.org.uk/wmap.htm

this confirms my suspisions i have always thought this
survey was ambitious, i have no confidence in these people,
they are just finding what they are expected to find,
im afraid that some of the aspects of science today
is like modern art, "in the eye of the beholder"
how many trees have been sacrificed to stringy, loopy
theories? have any of these people improved our way
of living?
every other month now we get theories from main stream
scientists that would be considered crackpot if it came
from any other source.
Last edited: Oct 25, 2003
Eh

Now taking bets on how long our newest crank will last on these forums. Keep in mind that the average time is 2 weeks, so factor that in before placing your bet.
chroot
Staff Emeritus
Science Advisor
Gold Member

His site also includes an excellent treatise on how special relativity doesn't work:

it has to be considered as invalid as the Lorentz- Transformation formula implicitly contains the assumption of the invariance of the velocity (of light) in moving coordinate systems, which obviously does not apply for material objects (for which the classical vectorial addition of velocities holds)

Furthermore, he even explains why lasers don't work:

(and I for one am glad he pointed this out -- after all, all this time I've been thinking the lasers we make have actually been functioning. I'm going to have a talk with my boss about this.)

And he even lets us know why the Sun really shines:

Thanks so much Thomas2! You've put us back squarely in the 19th century where we belong!

thomas2 may have poor source material, but i stand by
my previous post.
quartodeciman

Thanks so much Thomas2! You've put us back squarely in the 19th century where we belong!

Sarcasm is the argument of people who have nothing else to say.
What about responding to the arguments given in my opening post ?
Last edited: Oct 26, 2003
Hurkyl
Staff Emeritus
Science Advisor
Gold Member

Like the implication of intellectual dishonesty going on at 0.3 degrees? When, in fact, the plot shows large error bars at 0.3 and smaller degrees and the secondary peak is near 0.38 degrees?


Or your interpretation of "I believe we are doing things correctly" as meaning that they have nothing but belief to back up their process?
Thomas2

Originally posted by Hurkyl
Like the implication of intellectual dishonesty going on at 0.3 degrees? When, in fact, the plot shows large error bars at 0.3 and smaller degrees and the secondary peak is near 0.38 degrees?
Or your interpretation of "I believe we are doing things correctly" as meaning that they have nothing but belief to back up their process?

I haven't accused anybody of intellectual dishonesty but merely pointed out a systematic error in the data analysis that, if corrected for, might explain the data as an artefact of the experimental configuration alone (the error bars are irrelevant for this argument which would also hold for a zero statistical error).

However, it would be intellectual dishonesty if evasive answers are used to counter any critical arguments regards an experiment and its evaluation. Clearly one can not adopt the position that the paper has been accepted by the referees and published and is therefore beyond any criticism.

P.S.: I have removed now my own interpretation of the author's response to my criticism from the original post, so everybody can make up his/her own mind about this.
Last edited: Oct 27, 2003
Nereid
Staff Emeritus
Science Advisor
Gold Member

Thomas, do your own analyses!

There is, I believe, abundant material in the public domain from which you can perform an independent analysis of the WMAP results, wrt testing the validity of your hypothesis of a flaw in the WMAP data analysis.

Some examples:
- there are many other observations of the CMB with angular resolutions in the range 0.1 - 10o. How well do the data from these observations match WMAP, both in terms of the specific hot and cold spots, and the angular power spectrum?

- One of the WMAP technical papers (The Angular Power Spectrum, G. Hinshaw et al, 2003, ApJS, 148, 135) mentions 208 point source detections (and provides data). The WMAP data on each of these point sources, when convolved with the correct beam profile (your hypothesis) would provide a clear test of your hypothesis (better if the analysis were done blind, of course).

Let us know what you find.
Thomas2

First of all, I have already made my analysis (of the paper that is) and have come to the conclusion that the WMAP data have been evaluated incorrectly (as indicated above). Had I been the referee of the paper and rejected it for the reasons mentioned, then you certainly wouldn't ask me to re-analyze the WMAP data but this would be the task of the original authors.

In this sense it is not my task either to bring this into context of other corresponding experiments, but as you can see from the data-plot shown under http://www.astro.ucla.edu/~wright/CMB-DT.html , the other experiments are very much inconclusive and do not clearly exhibit the two main peaks in the angular power spectrum (after all, if the situation would have been clear already without WMAP, the latter would have not received the attention it did).
Even if there is an indication of the main peak in one or two of the experiments, this could well be due to the circumstance that the same error was made in the data analysis there(one should also note that telescope size and frequencies used are very similar in all these experiments).

Regarding the point sources: I was not referring to those that have been identified as point sources, but those that appear as the background radiation and fill the beam. It is only then that the difference between the two channels becomes equal to the statistical error of the number of sources and the effective beam profile changes. When I am saying 'sources' I am not talking necessarily of macroscopic astronomical objects here, but merely of regions that emit statistically independent photons (which could be in principle an atom). Also, each of the two detectors will introduce its own statistical micro-pattern of sensitivity (similar to the grain in a photograph) which would lead to the same effect.
In other words, if two identical detectors measure a homogeneous background noise (whether the latter is real or internal), the difference between the count rates will not be zero but equal to the square root of the count rates (the statistical variance). For twice the background noise, the difference between the detectors will therefore not double but only increase by a factor &radic;2 . This is why the spatial sensitivity pattern (beam profile) of the telescopes has to be transformed accordingly if one evaluates the differential signal for a homogeneous background noise.


As I understand, the angular power spectrum was only derived from the data in the V and W bands and I referred specifically to the corresponding beam profiles with my arguments (see http://www.physicsmyths.org.uk/imgs/wmap_beam.gif ). In principle you are of yourse right, and there should be a band-dependency, but it should be up to the authors to show if there is some or not (obviously, you need the actual data and as well the analyzing program which I both haven't got).
Last edited: Oct 30, 2003
Thomas2

Originally posted by Nereid
Re-analysing the data according to your beam profile hypothesis should show this band-dependency.
Let us know what you find.

I have produced now a plot that shows the error being made by using the beam profile for the individual telescope for the differential signal as well. The function shows a pronounced maximum near where the secondary peak in the angular power spectrum is located (see Fig.5 and paragraph above on my page http://www.physicsmyths.org.uk/wmap.htm ).
Share:
Share

I How to find Planet Heliocentric latitude data?

I Stromgren photometric data in Vizier

A Globular clusters in SDSS data

For astronomers, what software/languages do you use to handle data?

I Acquiring a Small Dataset of a pulsar signal