As a student, his texts greatly influenced me.

Always sad to hear of the passing of another great scientist.

At least we still have his books:

and the Rindler metric:

Recollections of the Relativistic Astrophysics Revolution
(go to #t=1h26m32s )

We sat down for A Conversation With... Cosmologist and Professor of Physics Wolfgang Rindler.

Rindler began his career at UT Dallas in 1963, when the organization was called the Graduate Research Center of the Southwest. Through nearly five decades of service to the University and its predecessors, Dr. Rindler has authored or co-authored seven books, advanced the study of cosmology and general relativity and ignited the imagination of thousands of students. His studies on the universe, how it moves and how Einstein’s theories apply are cited worldwide.

During our visit, Dr. Rindler shared his thoughts on:

After a brief survey of the cosmological features of the observable universe the two main techniques used in theoretical cosmology are developed. These are the Kinematic technique as first used in Kinematic Relativity, based on the concept of a Kinematic equivalence, and the Riemannian technique as first used in General relativity based on the concept of a Riemannian space-time map. Formulae for proper distance, red=shift, etc. are developed independently in each technique. Others like nebular count formulae, which are less readily amenable to the Kinematic technique, are discussed by the Riemannian technique only. The two techniques pre then correlated. It is found that any homogeneous and isotropic model-universe with given Kinematic properties can be described end discussed in terms of either technique and that a relation exists between the arbitrary elements in the two descriptions. It is shown how formulae associated with either technique can be translated into formulae associated with the other. Thus the geometric apparatus of the Riemannian technique end other useful formulae become available to the Kinematic technique. The correlation extends the scope of the Kinematic technique and at the same time throws light on certain aspects of the Riemannian technique. The red-shift formulae developed earlier are now used to analyse the new Humason-Mayall-Sandage data on red=shifts» It is found that these rule out all but decelerating model=universes unless some further hypotheses are made. The particular hypothesis of varying absolute nebular luminosities is examined and the minimum rate required is found. The last chapter contains e complete analysis of visual horizons in cosmology. Two essentially different types of horizon are recognized end examples are given of models possessing either type, both types at once, or no horizon. In an appendix the tensor significance of the "relativistic" acceleration, as used e.g. in Page's equivalence, is investigated. 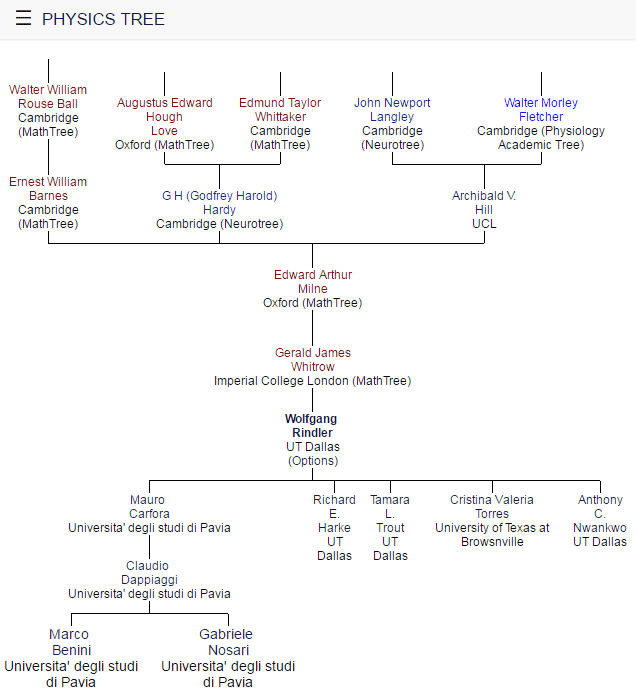 Suggested for: Wolfgang Rindler Passed Away

Astronaut Michael Collins has passed away

Sadly, The Monkees Michael Nesmith 78 has Passed Away

Ruth Ginsburg has passed away

Her Majesty Queen Elizabeth II passes away at 96

News More about the passing away of Mr Dyson

News David Thouless has passed away.