A company has been formed with $10 million dollars of funding to bring back the Woolly Mammoth, which has been extinct for perhaps 5-10 thousand years.
Here is Carl Zimmer's NY Times article on it. 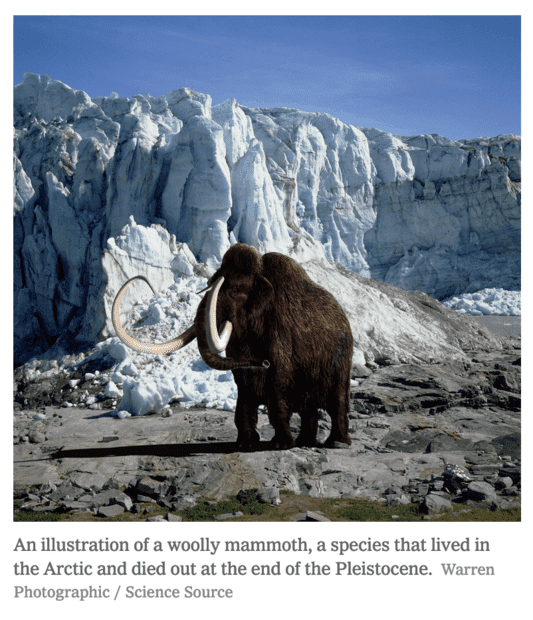 The original idea I heard of was get an intact nucleus with intact DNA from a very well frozen mammoth and slip it into an anucleated elephant egg (no elephant DNA left except in mitochondria), and stick it into a female Indian elephant that is ready for it to be implanted. The baby born, should then be a clone of the frozen mammoth.

Frozen DNA containing mammoth remains are fairly plentiful, so DNA sequence can be compared with their closest existing ancestor (the Indian elephant). However it is not in such good shape it could be used as is. Too broken up into pieces.
This idea has been around for a long time (longer than Jurassic Park, I think).

The new idea is to put new genes into an Indian elephant genome to replace some of the genes )about 60) that have been determined are making a major difference between mammoths and elephants.
The is largely a project of George Church, a well known biologist at Harvard Medical School.
Repeating this would produce elephants that are gradually more mammoth-like over the project's generations. It is a slower but more feasible approach.

Because the reproductive biology of elephants is not worked out (no one has harvested elephant eggs or done in vitro fertilization in elephants for example) and it would take a huge elephant herd to supply enough surrogate elephant mothers for the project, they would like to raise the elephants in artificial elephant wombs created using stem cell technology.
A fetal lamb has been raised in vitro for 4 weeks (not to term), however bringing an elephant to term would require two years. The fetus would be ~200 pounds (90.7 kg). That would be quite an accomplishment.
Set backs should be expected.
In an undergraduate embryology class I once put several fertilized chick eggs into plastic bags and kept them in an incubator for about 2 weeks. The ones that did not get contaminated developed until about 16 days. When they died (of unnatural causes). I should taken their egg shells, ground them up sterilized them and added them to the egg containing bag. This is an important source of Calcium for the developing embryos which they were lacking in my experiment.

Justification for doing this:
Possible Downers:

And if successful, what about predators and population control? Humans mucked up the ecosystem in the ice age by eliminating most all the large predators, then hunting the large mammals to extinction. You see the issue today with deer overpopulation - as there are no predators to take up the slack as humans arent killing enough of them.

Maybe they should instead work on bringing back something that will eat feral hogs ;)
BillTre
Science Advisor
Gold Member

BWV said:
Maybe they should instead work on bringing back something that will eat feral hogs ;)

I think the introduced pythons in the Everglades are probably already doing that.

Burmese pythons are non-venomous constrictors. They prey on native Florida species of mammals, birds and reptiles, as well as nonnative species including black rats. They have eaten Key Largo woodrats, a federally endangered species. The Burmese python may reach a length of 26 feet and a weight of more than 200 pounds.

BillTre said:
I think the introduced pythons in the Everglades are probably already doing that.

Maybe not the big ones, but smaller ones. They have eaten deer.
BWV

BillTre said:
Maybe not the big ones, but smaller ones. They have eaten deer.

Think we need jaguars back in TX

BillTre said:
How will the babies be raised without parents (no surrogates remember)? Elephants have strong, long term family relationships that are important to their growing up.

I think this can be done only by the slow modification of an elephant herd of a sufficient size. You need not only clones anyway, but sufficient variety of genes too: a population. Enough samples of different mammoth remains, and a big elephant herd too, so both side of the equation can be diverse.

I like your diversity comments (size in numbers would be good), but

Rive said:
Project of some hundred years, I guess. What means it's practically hopeless.

I think that modern techniques could conceivably speed things up.

Until all 60 of the genes they have identified are put in, they will probably want to keep adding more once one bunch is successfully done. This could be scored molecularly.

Based on criteria of what genetic transformations have been successfully passed on to which individuals and on individual physical traits and robustness, the next generation of modifications (next generation of reproduction) could be made, as soon as the appropriate traits could be scored. It could even be done before the traits are present as long as the individual animal is kept alive to be scored after which decisions could be made about what to do with the offspring.
Rive
Science Advisor

BillTre said:
I think that modern techniques could conceivably speed things up.

Maybe. But I don't know, that:
- what amount of new genes would be still acceptable by the herd for a new generation
- how fast can you migrate the herd to the north
- how fast can they pick up new habits (change of food source, and maybe: seasonal migration)

I would say (on the safe side) it's a few hundred years project (and some setbacks on the way).

Otherwise it's just some woolly elephants deported to camps in syberia

But it's a private venture. They are spending money to make money. At the cost they are quoting (15M), Disney could afford to bring back Mammoths just to play a small part in a movie.

If they manage to clone a Mammoth, I think they'll make vastly more than they spent; probably not as much as a blockbuster film makes, but still a lot. They'll probably make back the 15 million right off the bat with a super bowl commercial for hair spray or something.

For context, the US spent about 300 million dollars per day for a few decades in Afghanistan. The Mammoth project is set to cost about the same as 1 hour of one war/occupation.

Anyway, since people are likely to drive nearly all large wildlife on this planet to the brink of extinction pretty soon, we probably need some practice bringing things back and rebuilding ecosystems.
Last edited: Sep 15, 2021
Share:
Share

Siberian Mammoth died out 40,000 years ago