Renee'
I have an insane hypothetical question about energy and spitting atoms. I am currently writing my first novel in which my main character has the ability to control and manipulate energy. My hold up right now is what would happen if said character were to split a hydrogen atom with her mind. My idea came from her being so powerful that she could basically create an atom bomb out of thin air. What would happen in real life if someone were able to do this?

My guess is not much, it takes energy to split a hydrogen atom.

Splitting certain isotopes of uranium on the other hand would release energy.

http://en.wikipedia.org/wiki/Nuclear_fission
Renee'
What kind of energy does it take to split a hydrogen atom?
Drakkith
Staff Emeritus
Science Advisor

Renee' said:
What kind of energy does it take to split a hydrogen atom?

A nuclear weapon works by splitting heavy elements like uranium and plutonium and/or fusing hydrogen isotopes. You cannot split hydrogen like you can uranium because there's nothing to split. Heavy elements have many protons and neutrons, so they can be split into lighter elements. The vast majority of hydrogen is in the form of protium, which is a single proton with an electron. There's literally nothing to "split". Removing the electron from hydrogen isn't splitting, it's known as "ionizing" and takes a a few electron-volts of energy to do.
Enigman

Renee' said:
My idea came from her being so powerful that she could basically create an atom bomb out of thin air. What would happen in real life if someone were able to do this?

Hydrogen bombs work on basis of fusion and not fission. There is 'clumping together' of atoms rather than splitting: 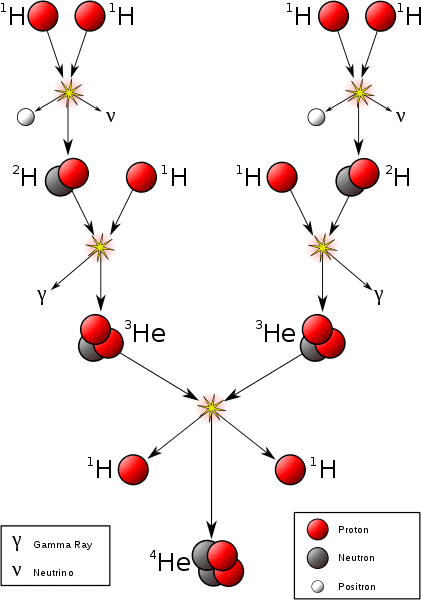 About splitting- there are three isotopes/types of hydrogen atoms: protium (single proton) deuterium(1proton,1neutron) tritium(1proton,2neutron); protium is the most common.
Splitting a proton into its constituent quarks would take energy rather than release it.
Splitting a deuterium into proton and neutron too will take up energy too, but tritium being radio-active will release energy when it undergoes beta-emission but not enough for a H-bomb.
Enigman

Conversely if your character can manipulate energy then why can't she fuse hydrogen together to make other elements?
Log in or register to reply now!

Comic writer in need of help.

Writer looking for help in space

Roller Coasters-help a writer out?

Hi I am writer, please help