Have you ever struggle to do a simple math/physics problem correctly for a long time JUST because of a ridiculous oversight you repeatedly made?
Last edited by a moderator: May 17, 2013

Haha in fact yes. When I was learning topology there was a problem at the end of the chapter on connectedness and compactness which asked to show that if ##X## is a topological space and ##CX = (X \times I)/(X \times \{0\})## is the cone on ##X## then ##CX## is locally connected iff X is connected and locally path connected iff X is locally path connected. I was wracking my head over the problem for days on end and it was driving me quite insane but eventually,thanks to micromass, the solution was found and it turned out to be embarrassingly trivial because I had completely forgotten about fibers and saturated subsets associated with quotient maps, which in retrospect is shameful because they are very important when dealing with properties of quotient spaces.

Another time, I was trying to show that Maxwell's equations in curved space-time implied local charge conservation ##\nabla^{a}j_{a} = 0## but for some reason I kept running into dead ends. It turned out I kept on making the mistake of saying 2 - 2 = 4 lmfao
reenmachine
Gold Member

I lost count of how many times I did it on this very site in the last 2 months :rofl:
MarneMath
Education Advisor

WannabeNewton said:
Another time, I was trying to show that Maxwell's equations in curved space-time implied local charge conservation ##\nabla^{a}j_{a} = 0## but for some reason I kept running into dead ends. It turned out I kept on making the mistake of saying 2 - 2 = 4 lmfao

It's funny how the little mistakes are the ones that screw you over xP I blame the media!
jtbell
Mentor

Once during a derivation in a lecture, I set up an integral on the board, then proceeded to take the derivative. A few steps later, one of the students finally got around to correcting me. 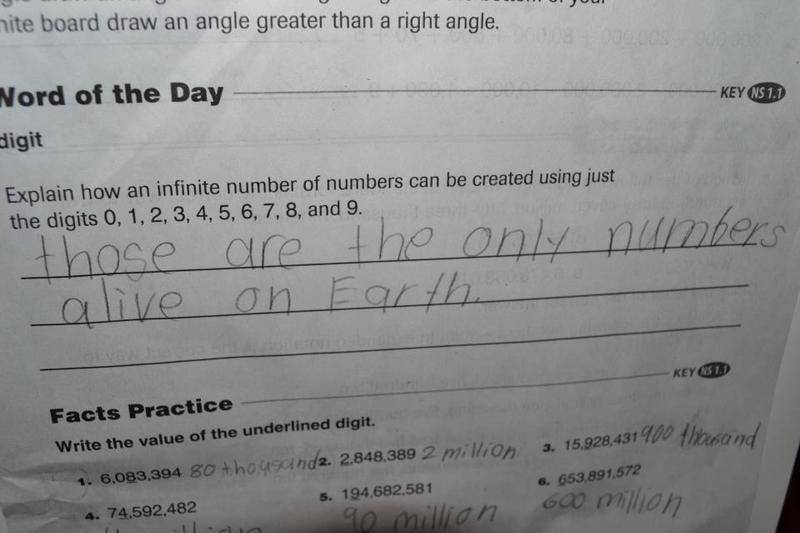 Once, in a graduate level partial differential equations class in a large lecture hall, I spaced for a second and missed a step of a derivation. When I interrupted the professor (via microphone) to ask how he'd done the previous step, he replied with a snide comment about me not knowing how to solve two equations with two unknowns. For the next several weeks I was chided by other students about the incident. People can be rather mean. Of course, I never opened my mouth during class the rest of the semester.
Borek
Mentor

I did many mistakes, but the one I remember was made by a friend of mine back in seventies - after solving some kind of a problem correctly he tried to rearrange the final answer and he canceled [itex]\frac 2 2 = 0[/itex]. It became proverbial in our group.
Evo
Mentor

I hope that's really your daughter because that's so cute.
trollcast
Gold Member

Although theres probably been worse than that before.
SW VandeCarr

Although theres probably been worse than that before.

You didn't really do that, did you?
SW VandeCarr

SW VandeCarr said:
You didn't really do that, did you?

Although theres probably been worse than that before.

SW VandeCarr said:
You didn't really do that, did you?

This happens to me so often that it's not funny (or is it?). I tend to do long stretches of study which sometimes make me feel like a zombie. I think my worst one was accidentally doing commas instead of plus signs when calculating a dot product. In my defense, the next step was correct as I'd continued on assuming that I'd written '+'s...
Julio R

I'm only in High School, but I make simple arithmetic mistakes all the time.
mathwonk
Science Advisor
Homework Helper
2020 Award

This is sort of mathematical - I once complained to a grocery store clerk that all the yogurt was outdated, because I forgot what month it really was. He got a kick out of that. I always try to avoid him since then.

I've got it. Once I asked a question of a Fields medalist about his specialty and he began to write briefly on a piece of paper, then stopped without a word. Since I could not see where he was going with it, I thought he was stumped and said "That's ok, I didn't really need it." When he looked at me oddly, but still without a word, I asked if I could have the paper. An hour later in my office, after he had gone home, I realized that what he wrote had completely solved my problem. It took me 20 years to mention it again and thank him.
Last edited: May 17, 2013
Julio R

Did the clerk know you have a degree in math? That would make it more embarrassing.
Thomas1989

Going back almost 8 years to my days in high school, I was absolutely terrible at maths as I didn't apply myself at all over the 5 years I was there. In fact, I don't remember learning anything at all besides basic arithmetic in primary school. Come my GCSE maths exams, I was practically reading hieroglyphs and needless to say, I flunked them.

It wasn't until a few years later during job interviews that I finally realized how much of an embarrassment that huge F looked on my CV. Around the same time, I took a big interest in astronomy, maths and physics, so I felt compelled to change it. I still cringe a little when I think back on it.
Last edited: May 19, 2013
qspeechc

Thomas1989 said:
It wasn't until a few years later during job interviews that I finally realized how much of an embarrassment that huge F looked on my CV. Around the same time, I took a big interest in astronomy, maths and physics, so I felt compelled to change it. I still cringe a little when I think back on it.

Sounds like you actually did something about it, what was it?

Anyway, I constantly make silly mistakes, like recently I had to sub t= -9 (t did not stand for time) into an equation, and I kept going wrong until I saw the equation had -t in it, and I never changed the sign of t = -9 . I do that kind of thing frequently.
Share:
Share

I Your favorite mathematical theorems
2

H
The biggest value for sin(x)/x

My first mathematical discovery. What was yours?

What is the biggest unsolved problem in topology

C
What is the biggest ordinal that exists metamathematically?