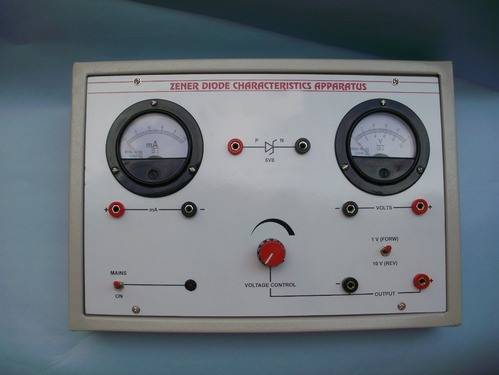 I really don't have any idea.I think it should be like this 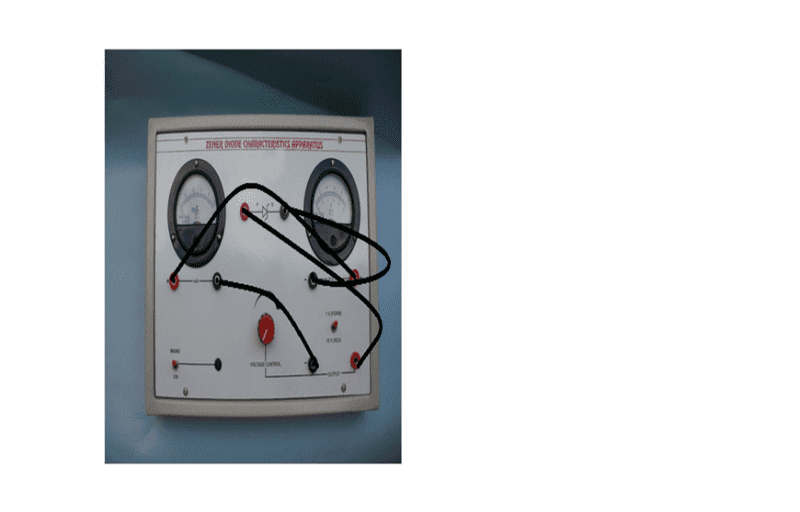 Please give me general idea how to do connections so that i can do in any kind of zener diode.Please it's urgent.
Last edited by a moderator: Jan 22, 2015

Well, I'd love to help, but the pics of the instrument don't help much.

Basically you will want to plot the I versus V characteristic, for both positive and negative bias of the diode. Use Google Images to see what that IV curve looks like to help you with your lab prep.
NascentOxygen
Staff Emeritus
Science Advisor

gracy said:
Please give me general idea how to do connections so that i can do in any kind of zener diode.

NascentOxygen said:
You have the wrong polarity connection for measuring the zener effect. You also seem to have the wrong connection for the voltmeter. The voltmeter should be connected parallel to the diode, but you show both meters in series with the diode. There needs to be a double-adapter available so that you can plug two wires into the one socket to get this right.

Can you further elaborate this?
NascentOxygen
Staff Emeritus
Science Advisor

The easiest way to get this right would be to connect up the voltage source, the zener diode, and the ammeter. Then, without changing or unplugging any of these wires, add 2 new wires to connect the voltmeter directly across the diode.

Gingerly adjust the voltage source until the zener current is a few mA. (I say gingerly because there seems no resistance is present to limit the current, so beware that current may increase suddenly with ony a tiny change in voltage source level.)
gracy

NascentOxygen said:
connect up voltage source, the zener diode, and the ammeter.

berkeman said:
but the pics of the instrument don't help much.

But it is really helpful to me.Can you please correct my connections in the diagram? .
NascentOxygen
Staff Emeritus
Science Advisor

Yes, these all in series, except not the voltmeter. A voltmeter always connects in parallel to the voltage it is to measure.
gracy

Yes, that's close enough. Though on your apparatus it is called "voltage control".

The designer has introduced some ambiguity (presumably with the best of intentions) by including a switch labelled forward & reverse, but failing to indicate whether the switch function applies to the voltage control, or maybe the voltmeter. Groan. :(

You can't be sure until you try it.
Bystander
Science Advisor
Homework Helper
Gold Member

Does the lab include any sort of instructions with the "box?"
gracy

The box with the meters, and power supply.
NascentOxygen
Staff Emeritus
Science Advisor

It might be a virtual apparatus.
Bystander
Science Advisor
Homework Helper
Gold Member

In forward bias why positive of battery is not connected with positive of diode?
Bystander
Science Advisor
Homework Helper
Gold Member

This demonstration is for normal diodes. Current flow through normal diodes is in the same direction as the arrow in the schematic symbol. Zeners will work the same way. When reverse biased, zeners will "break down" without burning up at whatever the rated voltage is for the given zener (provided current is limited to whatever the zener is rated to handle). A "normal" diode when reverse biased at a voltage that exceeds its rating will also break down, but the breakdown is "fatal" for the diode (the "magic smoke" escapes) and it doesn't work at all as a diode after burning up.
gracy

Bystander said:
This demonstration is for normal diodes. Current flow through normal diodes is in the same direction as the arrow in the schematic symbol.

Where are battery terminals in the apparatus taken in this video.
Bystander
Science Advisor
Homework Helper
Gold Member

The red and black terminals (pos. and neg.) in the lower left hand corner ---- it's an adjustable power supply, but same thing for this purpose.

For normal diodes to have a flow of current in the circuit, you will have to connect them in series ( + to - and - to +) rather than parallel since they do have a polarity.
gracy

Bystander said:
you will have to connect them in series

The battery/power supply and the diode.
gracy

Bystander said:
The red and black terminals (pos. and neg.) in the lower left hand corner

We've just run into another "convention" problem, haven't we?

The way I've always kept myself sorted out on diode polarities is to look at the arrow printed on the diode, and think, "Okay the arrow points the direction that current will flow, and that is from positive to negative (yeah, electron transport is in the opposite direction, but we don't care). So we're back to that "cathode inside the cell as source of electrons for cell contents is also anode outside the cell as a sink for electrons moving in the circuit outside the cell game."

The way to think of it for this exercise is that if we're going to assign polarities to the terminals of a regular diode, is that the arrow points to the "negative" terminal of the diode, and the other end is the positive. At least that will agree with what's in the video.
gracy

But my question is still alive.

gracy said:
But my question is still alive.

gracy said:
In forward bias why positive of battery is not connected with positive of diode?

Okay. Just went back to a couple handbooks to sort my brains out --- there is no fixed polarity convention to terminals of diodes. Each terminal can be, and is, described as having either polarity. Bottom line here is that the video should have been using some other color terminals for connecting the diodes (white at either end to indicate the ambiguity of their use of positive and negative terminals when describing the diode connections).

A diode will pass current only one direction. That direction is indicated by the arrow, and you can think of positive charge passing in that same direction, or electrons moving the opposite direction. Hooking a positive source to the pointed end of the arrow is the same as an open circuit, no current flows. Hooking a positive source to the blunt end of the arrow and completing the circuit with some other components (plain wire, meters, resistors, whatever) allows current to flow.
gracy

It works. My suggestion for the long run is to remember the "arrow is direction of current."
Share:
Share

Circuit with a zener diode

Is the zener diode on?