A very complicated puzzle: the planet of lies

I found this puzzle in some other forums. I found it to be very difficult. Maybe somebody would like to that a crack at it Anyway, here it is:

The human race spread out to the stars, eventually terraforming and colonizing thousands of planets. On one planet, P3, they decided to perform an experiment in genetic engineering, attempting to develop a race of people who would always tell the truth. This, they thought, would turn the world into a perfect society - no one could get away with crimes or other deceitful activities. However, the experiment went awry and the engineered compulsion to tell the truth also acted as a compulsion to lie; these two happened randomly, with the person having no choice: he had to either lie or tell the truth as he was complelled to do at the moment. Thus no one could trust anyone because even if a person wanted to be honest he would lie randomly about half the time and never knew which ahead of time. So both the planet and the experiment were abandoned and the population was left to survive on its own.

Throughout thousands of generations evolution took its course and strict classes of periodic liars arose. Each person in class x would make a false statement exactly once every x times, with all of the intevening statements being true. Children were tested at an early age to determine their class, and each would be relegated to different roles in society. The classes were as follows:

Class 1: the Unbelievables: every statement was a lie. These formed the lowest level of society; they got no steady work and were often reduced to begging.
Class 2: the Two-Faced: every second statement was a lie, thus alternating between lies and truth. They performed the most undesirable work and often turned to crime.
Class 3: the Spinners: every third statement a lie. their motto: "Hey, 2 out of 3 ain't so bad!" They did standard blue-collar work.
Class 4: the Squares: every fourth statement a lie. They held the white-collar jobs.
Class 5: the Priests: every fifth statement a lie. The thought themselves superior and actually goverened the society.
Class 6 and above: various levels of High Priests. They made all of the rules and laws.

High Priests were rare. The higher the class the fewer the number of people in it. Occasionally an individual with an extremely high class number was born, usually double-digits, sometimes even over a hundred! These were called the Prophets. The held themselves aloof from society and often lived ascetic lives as hermits. They were revered as sages. Some of them formed secret religious societies, engaging in careful inbreeding, awaiting the birth of an "avatar", a person of class "infinity" who never ever told a lie. Skeptics would ask how could one ever tell if the alleged avatar was genuine; perhaps he just had a class number so high that he would not live long enough to tell his first lie!

This discriminatory class structure was hypocritcal, since actually anyone could gain another's trust by exposing himself as follows: a class 1 would simply say 2+2=5 twice in a row then the listener would know to believe the opposite of everything he says. And any higher class would simply say (at the proper time in his cycle) 2+2=4, 2+2=5, thus establishing himself as not class 1, and so his very next statement would be true. They could even use it to state their class number. And revering prophets as wise men was misguided. Telling the truth a lot did not mean a person was smart. He could be stupid, and when asked difficult questions would simply be compelled to say "I don't know the answer."

It should also be noted that not everyone belonged to the society. There were many left-overs from earlier times who were still compelled to lie randomly. These were called class zeroes and were totally banned from society; they lived in a primitive state in the wilds. They were looked upon as no better than animals and sometimes were even hunted for sport. Also, if any class zero attempted to enter the towns and villages they were immediately killed.

Eventually the planet was rediscovered by the spacefaring civilizations. After the initial language difficulties were surmounted, the natives saw that the spacemen seemed to always tell the truth and were thought to be high-class prophets. But eventually they were caught telling occasional lies, and not periodically. Many natives considered them to be class zeroes and wanted them to leave the planet. No one actually wanted to try killing them since they were obviously much technologically superior, and thus too dangerous. But others realized they lied voluntarily, not compulsively or at random, and the High Priests designated them as "classless aliens" and were to be tolerated but not trusted.

During the hundreds of years following there was extensive trade and interaction with the aliens, and the inevitable interbreeding, so the native population became more and more able to lie voluntarily and eventually became indistinguishable form the aliens, as far as lying was concerned. The class system disappeared and since no one could any longer trust anyone else, and the society collapsed, reverting to barbarism. By this time the class zeroes had all been exterminated and eventually the population was subjugated by the space-faring civilizations and used as slave-labor.


Now it so happens that among the numerous secret societies on P3 there is one group that calls themselves the PsychoMaths. They create all sorts of numerical and logical puzzles and challenge one-another at their meetings. On of their favorite pastimes is playing the game of Number Match. A referee chooses 5 players, no two of which are of the same class, who play the game for 10 rounds. During each round each player secretly chooses and writes down a number from 1 to 5 and gives it to the referee. Once all numbers are in the referee exposes them all and delcares the winner, who is determined by the Match Rule: Any player whose chosen number is the same as that of any other player(s) is said to be matched; all other players are unmatched. The winner is the unmatched player having the highest number, and he scores points equal to his number; no other players score that round. If all players are matched no one wins that round and no one scores.
(Examples: if the numbers are 4,5,5,3,4 then only 3 is unmatched and wins. If the numbers are 5,2,5,4,3 then 4, 3, 2 are unmatched and 4 wins.) After the 10 rounds are over the referee calculates the total scores for each player and then the winner is determined from these 5 scores by using the Match Rule again: the player having the highest unmatched total score wins the game.

The game is played in secret and after the game is over each of the 5 players in turn makes 6 statements about the game which the referee carefully records on paper, in the exact order stated. During this recording session absolutely no other statements are made by the players. For the written statements the players are assigned letters A,B,C,D,E in order to remain anonymous. Then the statements are presented to the full membership of the society as a puzzle, and they attempt to deduce who was the winner.

Below are the statements of a recent game, listed in exact order:

Can you determine the winner?

Remember: each player is of a different class. All 5 total scores can be determined, but not the exact number choices of the losing players of each round.

micromass said:
Can you determine the winner?

...I don't think so. It's possible my logic is fallacious, but here's what I get:

If D3, that he won the first round = lie, D2, D4, D5 = true (because D1 is true in this scenario, meaning he has to tell at least two truths between lies). D6 then has to be true, because it would be the only way to determine D's class, which is possible as stated in the OP. This would mean that no one won two consecutive rounds, he lost the first round, and that we won two of the first three rounds. If he lost the first round, two win two of the first three rounds, he would have had to win rounds 2 and 3, which are two consecutive rounds.
Impossible, because it breaks D1.
Ergo, D1 = false.

If E = class 1, then:
He won the first round, he won the third round, he lost the sixth, seventh, and eighth rounds.

In both scenarios, D chooses 4 every round and D won the first round.
That means C2, a total score of 14, is a lie.
That also means that C3, that he chose 4 in the first round is a lie (because otherwise D wouldn't have won round one).

Since B is class 1, that is impossible.

That explanation is very sound for the most part Zaph0d, but I found one thing that proves it wrong. You assumed that E4 and E5 both had to be true in your original assumption. But by not assuming that you get Person E as Class 2 and it all falls into place. After working on and off for 5 hours or so I think I have it.
The Winner is

Player B with a score of 2
In the image below is my spreadsheet with all the statements and scores and such. Please check it for inaccuracies. 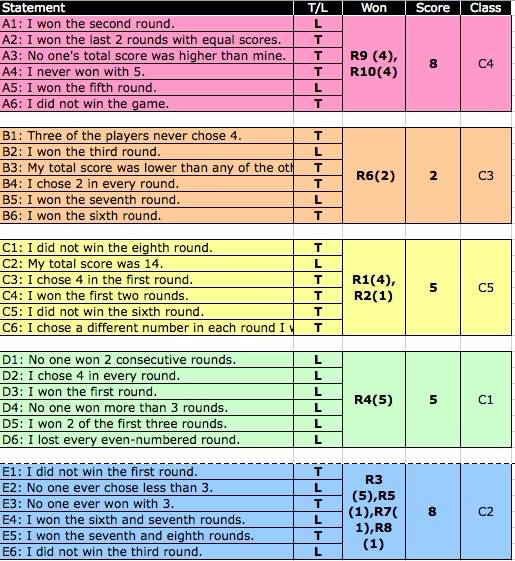 Related Threads on A very complicated puzzle: the planet of lies

I
Knight and knaves and distant planet puzzle

Planet of the Apes