Earth mimics supernovae with TGFs. No one knows how.

In recent decades researchers have discovered some strange things happening in the cloud tops. High above ordinary lightning, exotic forms known as red sprites and blue elves shoot toward the heavens, cold cousins to the fiery bolts below. In some places jets of antimatter fly upwards, triggering the detectors on NASA's orbiting high-energy observatories. And as often as 500 times a day, Earth briefly mimics a supernova, producing a powerful blast of gamma-rays known as a Terrestrial Gamma-ray Flash or TGF.

No one knows exactly how these phenomena are related either to each other or to the lightning down below.
Last edited: Sep 12, 2013

I posted a similar story about dark lightening a few months ago
https://www.physicsforums.com/showthread.php?t=684287


scientists recently discovered something mind-bending about lightning: Sometimes its flashes are invisible, just sudden pulses of unexpectedly powerful radiation. It’s what Joseph Dwyer, a lightning researcher at the Florida Institute of Technology, has termed dark lightning.

For decades researchers have been aware of magnetic and electric fields in thunderclouds, and believed lightning was due to a discharge of the electric field. But measurements have not so far accounted for the energies released in lightning, dark lightning, sprites, elves, and in the production of antimatter jets and gamma-rays. Cosmic rays are hypothesized as potentially playing a role. Perhaps even the sun or the van Allen belts play a role - although I cannot imagine how. Another thing that is difficult for me to understand is the particular atomic structure of the icy water molecules that make up the towering columns in the thunderclouds which seem to act as particle accelerators. Is this simple H20 as found in ordinary drinking water? Perhaps it is H3O2, a more structured form of water with electrical properties more suitable for charge separation and discharge?
Dotini
Gold Member

Here we have some new research and calculations indicating Terrestrial Gamma-Ray Flashes (TGFs) are generated within thunderstorms by very strong electric fields accelerating electrons to near light speed, with an outside assist from cosmic rays.

http://www.abc.net.au/science/articles/2013/10/18/3870631.htm
Electron avalanches could be generating some of the highest energy radiation bursts ever discovered on Earth.

On average each thunderstorm produces at least one TGF.

"Passengers flying through a thunderstorm when a TGF occurs would receive a significant dose of radiation, comparable to a full body CT scan," says Dwyer.

He says it amounts to a fair fraction of your lifetime radiation budget.

"There's probably a half-dozen ways a thunderstorm can hurt you if you're in a plane inside one, and now we've found another way," says Dwyer.

"The good news is this would be a very rare event. Pilots already know to stay away from thunderstorms, they're dangerous places even without gamma rays."


http://onlinelibrary.wiley.com/doi/10.1002/grl.50742/abstract
[1] The source of terrestrial gamma-ray flashes (TGFs) has been an active area of research since their discovery by Compton Gamma-Ray Observatory/Burst and Transient Source Experiment in 1994. These intense bursts of gamma rays originate within thunderclouds via the rapid production of relativistic runaway electrons, accelerated by thundercloud/lightning electric fields to multi-MeV energies. Recent studies have shown that electrical discharges within thunderclouds caused by these runaway electrons can generate currents that rival those of lightning and so could serve as an alternative discharge path for thunderclouds. In particular, the discharges responsible for TGFs produce some of the largest amplitude VLF-LF radio pulses from thunderstorms and, indeed, were previously misidentified as lightning. In this article, we shall provide a brief review of TGFs and present calculations of their electrical properties inside thunderclouds and their gamma-ray and optical emissions. We shall show that the lightning-like events responsible for TGFs emit relatively little visible light and, thus, are inherently dark.
Dotini
Gold Member

From spaceather.com comes news of a new upper atmospheric phenomenon, the troll.

SPRITES AND TROLLS AT THE EDGE OF SPACE: We all know what comes out of the bottom of thunderclouds: lightning. But rarely do we see what comes out of the top. On August 10th, astronauts onboard the International Space Station were perfectly positioned to observe red sprites dancing atop a cluster of storms in Mexico. They snapped this incredible photo: 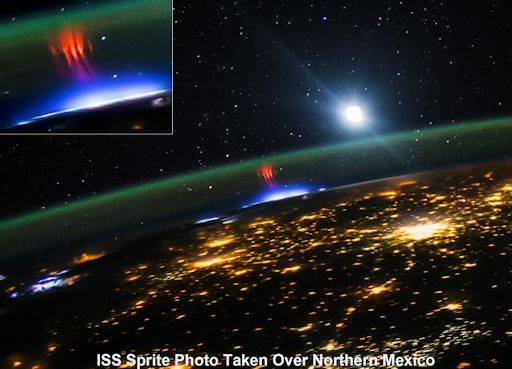 This shows just how high sprites can go. The photo shows their red forms reaching all the way from the thunderstorm below to a layer of green airglowsome 100 km above Earth's surface. This means sprites touch the edge of space, alongside auroras, meteors and noctilucent clouds. They are a true space weather phenomenon.

A few minutes after the astronauts saw the sprites, they spotted a related creature--a "Troll." It jumped up to the left of the sprites: 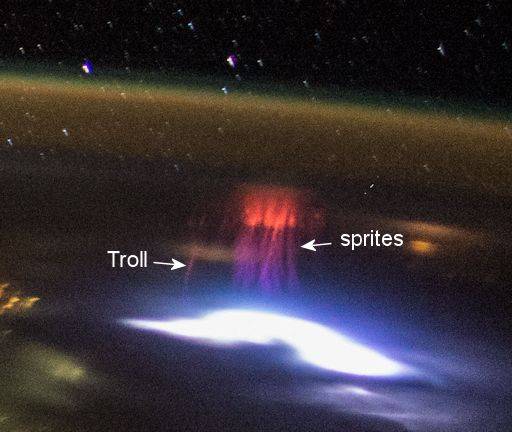 "Trolls are also known as 'secondary transient luminous events," explains Oscar van der Velde, a member of the Lightning Research Group at the Universitat Politècnica de Catalunya. "They are occasionally observed alongside big clusters of sprites, and they can reach 40-60 km high."

Van der Velde says that sprites can actually pull Earth's ionosphere down toward the thunderstorm. When the gap shrinks, and the local electric field intensifies, Trolls appear.

You don't have to be onboard a spaceship to see these exotic forms of lightning. "Sprite chasers" regularly photograph the upward bolts from their own homes. Van der Velde has photographed Trolls from ground-level, too. "I recorded thesetrolls last October over a storm over the Mediterranean Sea west of Sardinia and Corsica," he says. Browse the sprite gallery for more examples.

Suggested for: Earth mimics supernovae with TGFs. No one knows how.

How far does the earth travel in one year?

No storm on Earth lasts like the one on Jupiter

B Types of supernovae.