(b) I'm confused as how to solve this.
According to Griffith (sum no. 3c) no. of genotypes = 3n, n-is the no. of genes (and not heterozygous genes).
Is this formula correct?
I tried to check. Like, in monohybrid cross, 31=3 and dihybrid cross 32 =9. But there the loci were also heterozygous. While crossing two individuals AABb and AaBB (both heterozygous for one lous), AABB, AaBB, AABb and AaBb were the progenies. Here unlike the formula (32=9) 4 different genotypes are obtained.
So here I'm confused as what the formulae should be.

(c) I don't know what the formulae is. For straight monohybrid and dihybrid crosses though 3n works, there were 3 and 9 phenotypes respectively.

(d) Can this be found out without a Punnett square?

Any help will be much appreciated.
Last edited by a moderator: Aug 21, 2018

(b) I'm confused as how to solve this.
According to Griffith (sum no. 3c) no. of genotypes = 3n, n-is the no. of genes (and not heterozygous genes).
Is this formula correct?
I tried to check. Like, in monohybrid cross, 31=3 and dihybrid cross 32 =9. But there the loci were also heterozygous. While crossing two individuals AABb and AaBB (both heterozygous for one lous), AABB, AaBB, AABb and AaBb were the progenies. Here unlike the formula (32=9) 4 different genotypes are obtained.
So here I'm confused as what the formulae should be.

(c) I don't know what the formulae is. For straight monohybrid and dihybrid crosses though 3n works, there were 3 and 9 phenotypes respectively.

(d) Can this be found out without a Punnett square?

Any help will be much appreciated.

All along I think you are too concerned with formulae. The more or less obvious reason for them should be together with the formulae in your mind. If you just depend on remembering formula you will surely make mistakes.
(b) Maybe the confusion here is just about what Griffith means by ''progeny'. You are thinking of immediate (first generation) progeny, and he means eventual progeny, i.e. second-generation and thereafter? All (3) combinations of pairs of two alleles are possible in these later generations, just not in the first generation that I think you had in mind. So for n genes eventually there are 3n possible diploid combinations.

(c) again the formula ought to be obvious. You have a straight case of dominant and recessive genes. That means for each character just how many phenotypes? In the case of your problem there is no difference between first generation and further ones in the numbers of possibilities. However with other possible parental genotypes there could be such a difference. In which case does that arise? This is, as far as I remember, classical Mendel.

(d, e) I'm sure I could easily find the answer although I have forgotten what a Punnett square is!
What is the principle involved? (And what is it either in the book or your approach that prevents you realising it?). It is that the allele frequencies in the subsequent generations is the same is that in the original population of 2. Why not? (OK, if there is selection for phenotypes going on as happens in nature and artificially that complicates but we are not onto that yet.) Now here there is a formula–Hardy-Weinberg but this is conceptually very simple anyway, scarcely needed here, and a very simple case of it.
Last edited: Aug 19, 2018
BillTre
Science Advisor
Gold Member

I believe that all those problems could be solved with a Punnet square approach.
I have never used the formulae you mentioned but they would fall out of using a good understanding of making Punnet squares.

a) is correct. The reason is that you are determining the number of different gametes possible. It is done by figuring out how many different possible gene alleles (haploid, one allele from each gene or locus) you can get from each locus and multiplying those numbers together to get the total of genetically different possible gametes.
Writing all the possible gametes from each parent will populate the the two axes (or outer edges) of the Punnet square (one being male, the other female), each axis being having all the possibilities. In the example a, you have five genes where there are two possibilities and one with only one, so you would get 2 x 2 x 2 x 2 x 2 x 1 = 32 or 26 as you formula says.

Here is an unrelated example of a Punnet square: 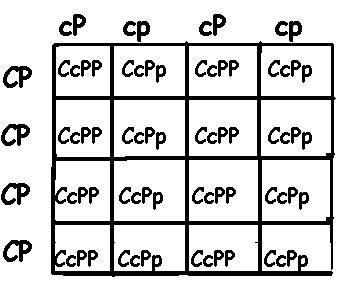 b) From a Punnet square point of view, you want to determine the number of possible different combinations of that could be produced from the two sets of gametes that you got in a.
This is a little more complicated.
Since each gene potentially has one of two alleles and you are considering genotypes (the underlying genetics) of the progeny, so you have a maximum of three possible genotypes. however, you have to look at each possible set of gametes from the two parents because it is possible to only get one, two or three different combinations depending on the gametes being produced by the parents.
Figure out the number of possible genotypes for each locus and multiple them together.
(All of the multiplying together is based on the different loci sorting out separately.)
The formula 3n would only work for the cases were there are three possible genotypes at n different loci.
If there were loci with two or one possible genotypes that would have to be used when multiplying together the numbers for each loci instead.

d) Yes, as I described. However, the Punnet square provides a nice (for me) visual way to thing about how to come up with the numbers.

e) Assume the possibility of getting each different allele of a gene as 50% (or 0.5).
Run through you parentals and determine the probability of getting the different possible genotypes necessary for producing the phenotypes corresponding to each gene.
I would think of it as a simple Punnet square for each individual gene.
Multiple together the probabilities for each individual gene together to get total probably for the complex situation they are asking you about.

As I said, I am unfamiliar with the formulae you are using, but there are many different ways to figure these things out.
They should all produce the same result if they are valid.
Better then just trying to follow formulae is to understand why the formulae are used and even better, being able to reproduce the formula from your understanding of how things work.
The Punnet square is a visual approach that works well for me in this way.

This is a complex problem. Hopefully I don't have any goofs in it, but it is possible, so you should check which I say with your own logic.

Thanks to both of you @BillTre and @epenguin.
BillTre your explanation really helped clear my confusion.

I think I nailed it.
epenguin
Homework Helper
Gold Member

Maybe I was confused. About what your confusion was.

It is true if you look up in the dictionary you will find that "progeny" does have two accepted meanings, it can mean the immediate new generation, or it can mean that plus all further generations,so the word could be a little ambiguous. However the first is the more common meaning, probably that meant here, but you could make sure by looking back at how this author is using the word. This helps explain the common use of the terms F1, F2 etc. _ avoids ambiguity.
With that meaning, F1, I think you have got b right.
Some of your factors are 2 and some are 3, because in this cross you cannot get one type of homozygote in F1 for some of the characters, so only two possible genotypes for that character in F1. In subsequent generations you can get 3 genotypes for each character and that is where your 3n comes from.

Check your answers for c, d, I don't think ¼ is right for Dd in F1, nor F2 and subsequent. ( A good way to check it occurs to me is to work backwards – if Dd is ¼ what is the allele frequency? Whereas genotype frequency is different in F1 and F2 but constant from F2 afterwards, allele frequency must be the same in all generations, including the starting parents generation.)
Thread is confusing enough so for all answers please state what generation/s answers refer to.
Last edited: Aug 21, 2018
TytoAlba95