How many PF users are from English-speaking First World countries?

Hi everyone! Just for fun, I thought I'd start a new poll asking how many of you are from the English-speaking First World countries: USA, Canada, UK, Ireland, Australia, and New Zealand.

Just to clarify, when I ask where someone is "from", I am asking the following criteria:

2. Those who were raised in said country (i.e. those who may have been born elsewhere, but were raised in the above countries from childhood into adulthood).

I put a poll here so that you could vote for the above choices.

(a) I am confident that people on PF know this already, but when I mention the United Kingdom, I am taking into account people from all of the regions of the UK -- England, Wales, Scotland, Northern Ireland, the Isle of Man, the Channel Islands. I am also taking into account those who come from current colonies/dependencies of the United Kingdom (e.g. Bermuda, the Falkland Islands, Gibraltar, the Pitcairn Islands, etc.)

(b) When I mention USA, I am also taking into account those who come from US territories, (e.g. Guam, Puerto Rico, or American Samoa).

(c) When I mention Australia or New Zealand, I am also taking into account those who come from dependencies from either country (e.g. Christmas Island and Norfolk Islands for Australia, Cook Islands for New Zealand).
Last edited: Aug 29, 2018

Here, I'll just give you the info 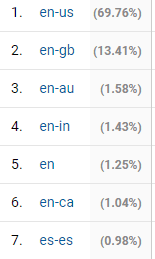 Related Threads on How many PF users are from English-speaking First World countries?

How many PF members are there?
2

K
How many countries have pyramids?

How many countries can you name?
2

L
How many countries can you name

Speaking of the world cup

A
News How would other countries fare as the world superpower?