Do you think that new discoveries about how Pluto interacts with the solar wind suggests that Pluto should be reclassified as a planet?

How so?
https://en.wikipedia.org/wiki/IAU_definition_of_planet
Does the interaction with the solar wind mean that Pluto has somehow cleared the neighbourhood around it's orbit?
Ava_Seven

Simon Bridge said:
How so?
https://en.wikipedia.org/wiki/IAU_definition_of_planet
Does the interaction with the solar wind mean that Pluto has somehow cleared the neighbourhood around it's orbit?

Obviously this new discovery is not enough on its own to conclude it is a planet, but in conjunction with other factors, its a little hard to deny that Pluto acts very much like a planet. Pluto has also been found to have an ion tail. It appears that the more data they uncover, the more Pluto appears to act like a planet.
Simon Bridge
Science Advisor
Homework Helper

It's taxonomy: a tenerec looks and acts almost exactly like a hedghog ... yet it is not a hedgehog.
newjerseyrunner

Definitions are silly and there will always be exceptions. Astronomers looking at little Pluto would do nothing different if it were considered a planet. As time goes by, we'll probably have to dump the definition we have now.

What if Planet 9 really is out there where it's thought to be? It's thought to be much larger than Earth, but will probably not have had time to clear it's orbit fully yet. What would that be? A proto-planet? TW Hydrae has a planetary disc around it that obviously has some very large objects embedded in it. At what point do we stop calling those proto-planets and start being planets? Does it matter?
rootone

I think the reason for the revised definition of "planet" in 2006 was due to there having been discovered several other objects similar to Pluto lying beyond Neptune.
Under the old definition of Planet, these qualified just a much as Pluto, and given the likelihood of many more out there not discovered as yet, this could lead eventually to an unwieldy number of planets in the solar system.
I think the motivation was to reserve the term planet for just a limited number of objects possessing quite specific properties.
Is this distinction of any value?, I agree that's questionable though I understand the motive, and the reclassification of Pluto doesn't make the Pluto system any less worthy of investigations.
Last edited: May 11, 2016
D H
Staff Emeritus
Science Advisor
Insights Author

newjerseyrunner said:
Definitions are silly and there will always be exceptions. Astronomers looking at little Pluto would do nothing different if it were considered a planet. As time goes by, we'll probably have to dump the definition we have now.

Yes, we will, but for a different reason. The problem with the current definition is that there are only eight known planets in the entire universe. If Planet 9 truly does exist and is found, that will close the books on the number of planets in the universe. Those 3300 things that we have found orbiting other stars are not planets, at least not by the current definition. A planet is, first and foremost, something that orbits the Sun. A proposed modification to the definition of what constitutes a "planet" drops the notion that a planet is something that orbits the Sun (it just has to orbit a star). It maintains the notion of "clearing the orbit".

This proposed modification It also drops the notion that a planet is something that is round (or roundish). It's impossible to detect the shape of exoplanets using extant or near-future technologies. We would need to be able to teleport to that star system to determine if an object is a planet by the current rules. Estimating their masses is doable, and that alone is enough to determine whether an object is capable of clearing its orbit in 11 billion years. Another reason for getting rid of the requirement that a planet is something that has pulled itself into hydrostatic equilibrium via self-gravitation is that anything massive enough to be able to clear its orbit will necessarily be large enough to pulled itself into hydrostatic equilibrium.

What if Planet 9 really is out there where it's thought to be? It's thought to be much larger than Earth, but will probably not have had time to clear it's orbit fully yet.

If Planet 9 exists, is observed, and is anything close to the size scientists currently think it is, it will be deemed a planet. Here's a graph: 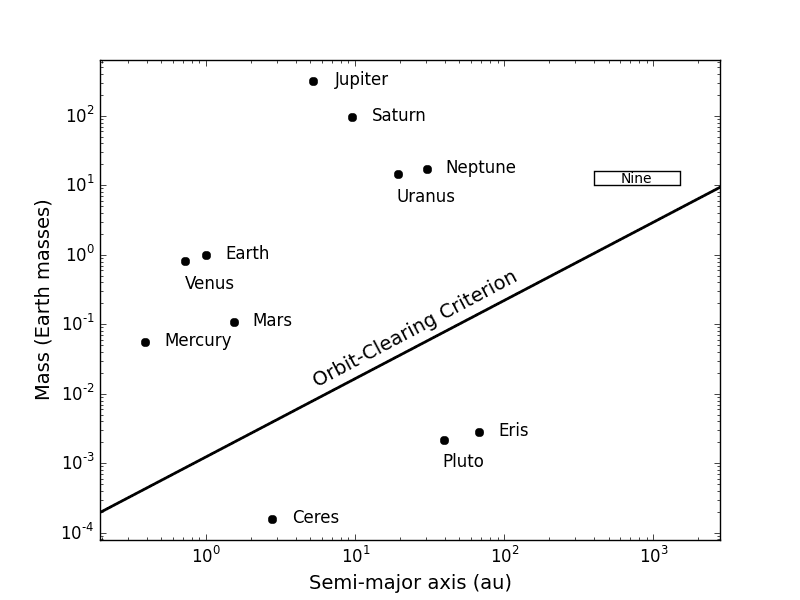 People misinterpret what "clearing the orbit" means. It does not mean "has the object cleared the orbit (now)?" It instead means "can the object clear its orbit before the Sun goes out?" Even more importantly, there's a mathematical definition behind behind that question.
Bandersnatch
Science Advisor

D H said:
It's impossible to detect the shape of exoplanets using extant or near-future technologies.

While I agree with the general thrust of your post, I think this one's a bit too strong a statement. Yes, it's impossible to observe directly, but knowing the mass, and providing the object is not in the very low-mass end of the spectrum (and all exoplanets detected thus far are way above the threshold), you pretty much can tell if its gravity could make it round or not. That is, the 'potato radius' is calculable, and even for purely rocky objects it lies well below what is currently detectable as an exoplanet.
D H
Staff Emeritus
Science Advisor
Insights Author

Bandersnatch said:
And all exoplanets detected thus far are way above the threshold.

That's the key point of the proposed modification to the IAU's definition of what it takes to be designated as a "planet". Unless those newly discovered objects are made of unobtanium, they will necessarily have pulled themselves into a spherical shape thanks to self-gravitation given that they have sufficient mass to clear the trajectory. The spherical shape aspect of what constitutes a planet is superfluous. Clearing the trajectory is anything but superfluous. Orbiting a star and clearing the trajectory are the keys as to what differentiates a planet from a non-planet.
Bandersnatch
Science Advisor

Oh, I see now. You were arguing that clause of the definition is redundant for planets not in the solar system.
D H
Staff Emeritus
Science Advisor
Insights Author

This of course leaves out the notion of "rogue planets", which are not "planets" by either the 2006 definition or by the proposed modification.
Simon Bridge
Science Advisor
Homework Helper

Again: it is taxonomy ... planets are in the solar system ... outside the solar system it is an exoplanet (in orbit about a star not the Sun) or a sub-brown dwarf (in orbit about the com of a group of stars). The second being the closest I could find for "rogue planet" ... afaict the definition here is a work in progress.
Also, as usual, there is a difference between technical and common use for words... and some discomfort when a new technical use is proposed.
It is common to refer to an object as a planet if it "looks like a planet".
Share:
Share

Solar and geomagnetic field interaction with or without solar wind

A That's how solar wind forms

I Solar wind velocity and corrections