Sylas is back again from overseas

It may take me a bit of time to get back into the swing of things; but I am back from a month overseas, in Hong Kong and Korea. Mainly personal business in both cases. Interesting times...

Anyhow, glad to see the place hasn't fallen to bits in my absence. If I've missed any really important gossip, drop a link here for me.

Hi Sylas. How was the trip?
sylas
Science Advisor

Borg said:
Hi Sylas. How was the trip?

Hong Kong was mostly a personal trip, so I didn't really get around much, but it was worthwhile.

Korea was terrific. It was a chance to spend time with my Dad and learn more about what he did there back in the sixties, and to see again where I grew up... for the first time in over forty years. Here's a couple of photos.

This is me and Dad... in the street where we used to live, then settling in to a small restaurant for a light lunch, then at the top of Pusan tower. 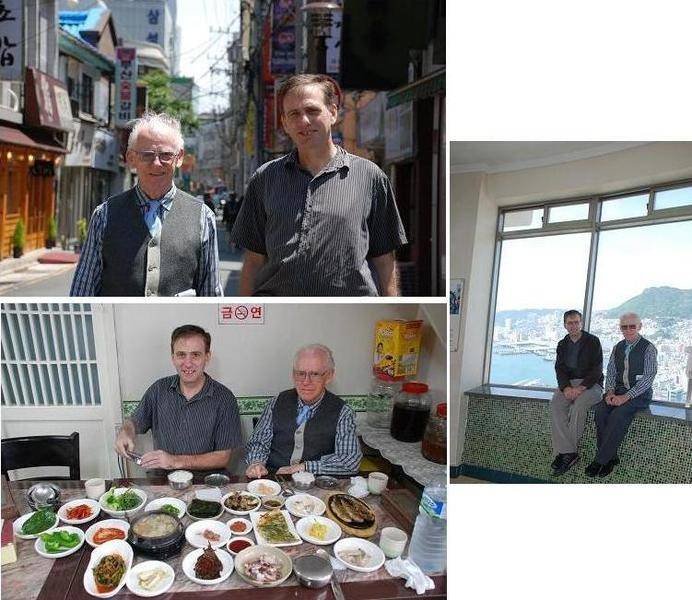 Here are some shots with old friends. The first shows, on the left, the patch of bamboo into which I use to jump as a child. Left to right is Mr Suh, his wife Su Ja, me, Mr Son who worked with dad in the mission office, Mr Kim who was a driver at the mission, and Mr Shin, who came to regard my Dad as his dad, and whom I now call "elder brother". Su Ja used to look after my younger brother and I as children; the shots below show Su Ja and I (2010), then Mr Suh and Su Ja and I (about 1966), then Su Ja and my younger brother (about 1964). 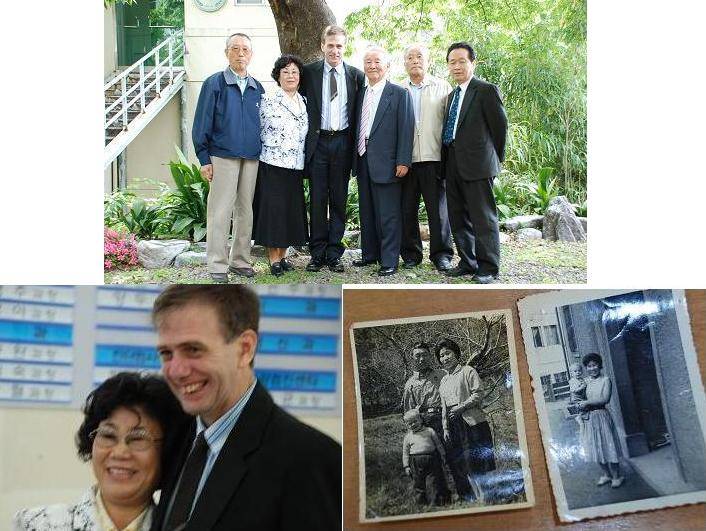 And places... at the old seminary where Dad used to teach, then the site of the old leprosy mission -- now replaced by a housing estate, then at my old kindergarten (but modernized). 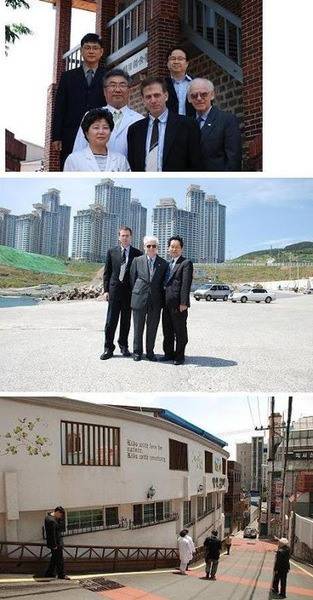 GeorginaS said:
That looks like a wonderful trip, Sylas. I'm particularly stunned, though, by your "light lunch". Really? That's lunch for two people?

Three, actually. A friend was with us and he took the photo. Dad is looking a trifle depressed because he doesn't like seafood much; and it figures prominently. There is rather a lot -- but perhaps not as much as you think, as there are lots of small dishes. But there were leftovers.

I was born in Pusan, South Korea, in 1959. My parents were there as missionaries at the time, with the Australian Presbyterian mission. Mum was there first, and then came back to Australia to marry Dad, and then the two of them returned in 1957. I arrived two years later, and my brother two years after that.

Dad taught in the theological seminary in Pusan. We had 18 months furlough in 1965 or so, and then returned to Australia permanently at the end of 1968. So I had my early childhood there and still have plenty of memories. But I never returned... until this year.

Dad had been invited back, and I had some free time to accompany him. Originally I hoped Mum might come as well, but her health and eyesight, are indifferent and she decided not to come. But she was delighted to think I was going to return with Dad, and we kept her well informed of the whole trip so she shared the experience with us. Originally we were going to be traveling with another missionary from those years, but he had to pull out, so it was just Dad and I on the trip -- and that in itself was a wonderful experience. A chance to spend plenty of quality time with Dad, and learn more about the work he did in Korea, and to revisit our old home together. It was a very special experience for us both.

I am no longer a Christian; I lost my faith at age about 25. However, Dad and I have always been able to talk together about belief and disbelief with mutual respect. Both of us are bookworms, and we often share reading notes and exchange books. This is one way I keep up my theological reading, despite being no longer a believer. Dad has a new book on the go almost every week, which keeps me busy.

My unbelief, however, was potentially awkward in Korea when meeting up with various church folks. We decided to take the easy way out. I would keep my theological discussions limited to what I could explain in Korean. Since this is limited to "Hello" and "Thank you" and "Where is the toilet please", plus a couple of other similar phrases, the issue is neatly bypassed. I've never had any animus against the church or Christian belief, so the affection and empathy I have with believers is real. I don't happen to share the beliefs or retain membership, and I'm happy to talk about that with people usually, but I don't go out of my way to get into discussions except where discussion is expected.

Dad's Korean is still pretty good; though a bit rusty. He preached a number of times on the trip -- always the same sermon, which he has been practicing for months. He also gave a lecture at a seminary -- same lecture twice -- which he also practiced for months. Dad has been back a couple of times since 1968, with Mum. This was the first time he returned with me.

Ha ha! Seeing that table of food reminds me of the Korean student who did an internship with me and stayed at my house for a week. She wouldn't leave any dirty dishes alone, promptly making sure they were put into the dishwasher (I felt like a terrible hostess that my guest kept doing the cleaning). When I insisted it wasn't necessary, she shared that she grew up without a dishwasher, and told me about all the MANY little dishes that are typical for serving Korean meals, so she liked getting to use the dishwasher and just having the few dishes from American style meals. She wished she had a dishwasher at her parents' house when her mom insisted on so many dishes.

And, wow, I can REALLY see the family resemblance between you and your father!

That sounds like a great trip. That must be so interesting to grow up in a place you haven't seen in so long and get a chance to go back to visit now. And probably very strange too. Did you remember a lot of it from your childhood to see how it changed, or were you so young that you were seeing some of these places for what felt like the first time?
hypatia

What a wonderful trip you and your father shared. Korea in the sixties, still recovering from the war, is so much different then today. It is a very beautiful country.
lisab
Staff Emeritus
Science Advisor
Gold Member

You picked an interesting time to be there, with the recent trouble with North Korea. What's the feeling amongst the South Koreans about the sinking of the ship, and increased friction between the North and the rest of the world?
sylas
Science Advisor

Moonbear said:
That sounds like a great trip. That must be so interesting to grow up in a place you haven't seen in so long and get a chance to go back to visit now. And probably very strange too. Did you remember a lot of it from your childhood to see how it changed, or were you so young that you were seeing some of these places for what felt like the first time?

I think you see different things as a child. The old mission house in which we lived is now demolished. We lived on the compound of a hospital established by the mission which is now expanded into the site of the what was our house. There were open spaces where we used to play that are now replaced with other buildings.

But the old retaining wall is still there which holds back the steep hillside behind the hospital and where we used to throw little wood lice for the fun of observing how they survived the fall without a problem. The water tower where we were forbidden to play (but did anyway) is still there; though now concrete rather than wood. One of the photos there shows the bamboo clump in which we used to play. The street in the photo with my Dad is still similar and I remember a school up the end which Dad did not recall.

The city has changed enormously; the old market is gone, and the roads are wider and larger and with more and faster cars. But I still recall flashes of all kinds of things... like the pine trees and the rocks. We never did get to visit Mt Chiri on this trip (Chirisan) where we used to go for holidays, but I do recall mountains and landscapes unlike anything in Australia.


lisab said:
You picked an interesting time to be there, with the recent trouble with North Korea. What's the feeling amongst the South Koreans about the sinking of the ship, and increased friction between the North and the rest of the world?

We heard very little about it, in fact. I guess people are used to these kinds of crises and there was no expectation I could see of this precipitating any drastic new changes. It was in the papers, of course, but not something which made any immediate difference anywhere.

Cheers -- sylas
Log in or register to reply now!

Related Threads on Sylas is back again from overseas

Sylas is back, again

Okay. Back again for the same question - Ebook reader