Three Americans, including two servicemen, who tackled a gunman aboard a train from Amsterdam to Paris on Friday are being hailed as heroes for thwarting what could have been a massacre.

"I saw a guy entering the train with an AK-47 and a handgun, and I just looked over to Spencer and said, 'Let's go, go!'" Skarlatos said. 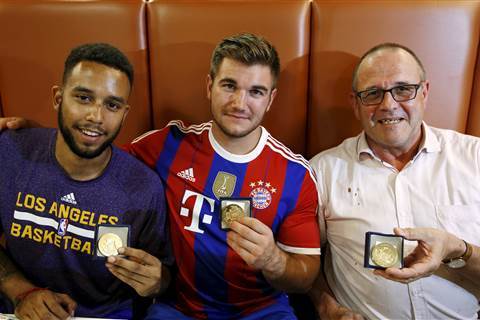 Bravery under fire. Probably saved a lot of lives. Glad it turned out so well.
nsaspook
Science Advisor 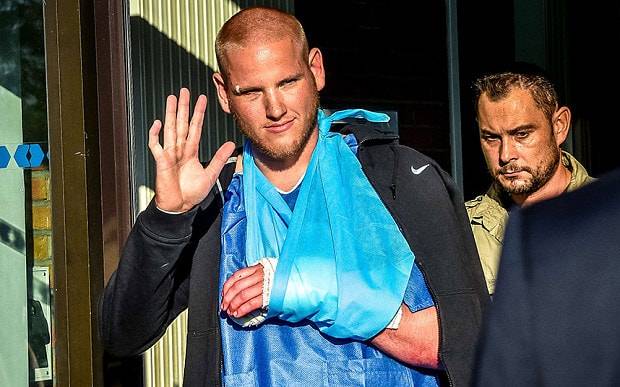 Pictures just in show Spencer Stone, one of the American heroes, leaving hospital in Lille. He looks a bit battered and bruised but otherwise in reasonable shape. Earlier, his mother said he had surgery on Saturday morning to repair some of the damage to his fingers and would need physiotherapy to get full movement back.
http://www.telegraph.co.uk/news/wor...in-attack-US-soldiers-foil-massacre-live.html
OmCheeto
Gold Member

And apparently a Frenchman:

http://www.france24.com/en/20150822-france-train-attack-briton-chris-norman-thalys
...
Norman said that after Stone tackled the gunman and Skarlatos took his weapon away from him, he came in to grab his right arm while another passenger, a French off-duty train conductor, held down the left arm.
...

I was having a difficult time believing the Brit's accent until I saw this:

....
Ugandan-born Norman is a British national but said he had only lived in the country for four years. He currently resides in the south of France while one of his children is in the French navy.
...

All in all though, a very happy ending.
Astronuc
Staff Emeritus
Science Advisor

Khazzani has denied any intention of waging a jihadist attack, saying he had merely stumbled upon a weapons stash and decided to use it to rob passengers, according to Sophie David, a lawyer assigned to his case at the beginning of his detention in Arras.
. . . .
"He says that by chance he found a suitcase with a weapon, with a telephone, hidden away," said David, who is no longer representing him as Khazzani has been transferred to Levallois Perret near Paris where he is being questioned by counter terrorism officers.

...
Under French law, suspects in probes related to alleged terrorism can be questioned for up to 96 hours, which means Khazzani could remain in custody until Tuesday evening.
...

Does this imply that they are going to let him go? Someone please tell me this is not so.
Astronuc
Staff Emeritus
Science Advisor

OmCheeto said:
Does this imply that they are going to let him go? Someone please tell me this is not so.

One French-American passenger was hit by a bullet and was hospitalized for a chest wound. He was in serious but stable condition, authorities said.

Hopefully, attempted murder is enough to keep him locked up. But you never know.
It's interesting to look at the different laws, or lawlessness, that different countries utilize, regarding these types of people.
But that's a topic for another thread.

I have a feeling, that this incident will keep me quite entertained, for some time, as the story seems to keep changing, day by day:


Among the other heroes of the night-time drama was a Frenchman on his way to the toilet who first tried to tackle the assailant...

I suppose it was like a car wreck. No individual saw the whole thing, from start to finish, and everyone had a different perspective.
Astronuc
Staff Emeritus
Science Advisor

US airman says train attacker 'ready to fight to the end'
http://news.yahoo.com/man-tackled-train-authorities-radar-3-countries-040337388.html [Broken]

Reaching into a gunshot wound channel and pinching off a clipped artery is an advanced EMS technique. I've practiced it but never had to use it for real. Great real-time emergency care. Great work.
nsaspook
Science Advisor

Looks like the Zoomie and his bros will be kissed by the French President.
http://www.france24.com/en/20150823-hollande-give-frances-highest-award-train-heroes-monday [Broken]

Ike received his in grand style.

Would you rather be jailed as a thief or a terrorist??

300? 500? rounds for the Ak47!!! pistols,box cutters, on a jihadist watch list in three countries!!!.....yeah, sounds just like your everyday guy. No need to become 'islamophobic' racist, insensitive, etc,etc,etc....

Look, even the very politically correct CNN reports the radical with the weapons has highly probably terrorist links:

OmCheeto said:
No individual saw the whole thing, from start to finish,

except the nut with the guns.....well, maybe he ended up face down, or even unconscious, so I guess even he did not see the whole episode.

I wonder if the authorities asked him to describe exactly where he found all the weapons....anybody would remember collecting all that stuff, packing it up, and remaining unobserved while doing so. Or how he expected to escape after robbing people on a mvoing train and shooting at least one other passenger in the neck....or why he didn't just rob a few people in the vicinity where he acquired all the weapons...

And then go there and ask locals if they observed anybody with a cart full of weapons or struggling to stuff all that weaponry into his pants, pockets,shoes, knapsack, and so forth.

ah, naw, all that is wishful thinking, likely they were too busy supplying him with lawyers,his miranda rights [how do you say that in french and arabic] .

And don't think it's any better here in the US. I happened to take AMTRAK last month, first time ever, and marvelled at all the people coming aboard with unchecked, uninspected luggage. There were K-9 police aboard and on the train platforms here and there, but I'm not sure what they were actually doing. At the train platforms, they seemed to spend a lot more time talking with each other than observing boarding passengers.
OmCheeto
Gold Member

Finny said:
except the nut with the guns...

Had he only had the pistol, I might be inclined to believe his side of the story.
But given that he had 500 rounds for his AK[ref: fox news story you referenced], I don't think I'll believe anything he says.

And this just in:

The first heroic passenger to wrestle a weapon from the train gunman was named last night as Frenchman Mark Moogalian.

Nice video in the link. nsaspook nailed it!

Though, looking closely, there may have been a pre-ceremony discussion:


Om's Imagination said:
Some French Official; "And after he pins zee metal on you, he will give you a French kiss".
Spencer;

In unison; "Dude, he may be the king of France, but tell him not to do that. Ummm..... We're not trying to be impolite. but please have him google "cultural sensitivity"."

One wonders if authorities have the presence of mind to check his shoes...... for explosives??
Finny

To add insult to the large scale near fatalities, I've heard two news stories saying the NY Times reports some train employees were running away while the three Americans, a Brit and a Frenchman were subduing the 'thief'. And after the incident, the American who nearly lost his thumb reportedly walked some adjacent rail cars to be sure there were not multiple 'thieves' aboard. THAT takes quite a presence of mind.

One wonders if the rail employees ever get hazardous duty pay. Did the Brit get his tie back.....the one used to tie up the 'thief'?
Ryan_m_b
Staff Emeritus
Science Advisor

Finny said:
the NY Times reports some train employees were running away...One wonders if the rail employees ever get hazardous duty pay

Rail staff aren't hired to defend against gunmen, very few people are. I don't see a problem with them, or anyone else, running away in this instance.
OmCheeto
Gold Member

Ryan_m_b said:
Rail staff aren't hired to defend against gunmen, very few people are. I don't see a problem with them, or anyone else, running away in this instance.

I had an interesting thought along these lines yesterday. Being ex-military myself, I could somewhat relate to the actions of the two military kids. We were trained and drilled and trained and drilled on all manner of "what if" scenarios. It always involved "action" to solve the problem. It never involved running away, or just standing there and watching. It's a mindset that has stuck with me, to this day.

It's probably a good thing that many people ran away.

Even though I was a submariner, and never had combat training, I know exactly what I'd do in their situation, as, after 9/11, I worked out all the details in my head, had I been on one of those planes. And I don't think I'd appreciate people just standing around, and getting in my way.
mheslep
Gold Member

One reason investigators suspect a premeditated attack was that El-Khazzani, who claimed to be homeless and living in a Brussels park, used a first-class ticket, Molins said. The suspect refused to take an earlier train, he added, although there were seats available — "the sign of a planned project."

Besides the assault rifle, El-Khazzani had 270 rounds of ammunition, a pistol, a box-cutter and a bottle of gasoline, Molins said.

Prosecutors also said they found a small explosive like those used in the tips of missiles hidden in the glass box containing the hammer used to break train windows in case of emergency. They did not elaborate.

"El-Khazzani watched a video of Islamic preaching onboard" on YouTube on his mobile phone shortly before he got up to start walking through the train with the weapons, Molins told reporters at a news conference. The suspect's phone was found in a bag left on the train.

Last edited by a moderator: May 7, 2017
nsaspook
Science Advisor

Alek Skarlatos, an Oregon Army National Guard specialist who helped thwart a gunman's attack on a train to Paris last week, will receive the Army's highest award for non-combat valor.

Well, tackling a guy who is holding an assault rifle and shooting, while one is unarmed, seems like combat to me.
nsaspook
Science Advisor

Astronuc said:
Well, tackling a guy who is holding an assault rifle and shooting, while one is unarmed, seems like combat to me.

It does to me too but a combat award will need an official declaration that this involved with a ongoing operation of the "Global War on Terror" so someone at the top would need to sign-off. I can easily see a Purple Heart for the Airman if this is traced to ISIS or some affiliated group.
OmCheeto
Gold Member

Well there goes my theory of; "If you're not military, get out of the way".

It seems Mark Moogalian, a college professor teaching in Paris, was the second person to confront the attacker.


"The academic acted instinctively to protect his wife Isabella Risacher, who was also aboard the Thalys train."​
The sixth hero: "The 28-year-old French banker known only as "Damien A" was the first person to tackle the gunman, but does not want to be named."

Three moms had no way to fly to see their hero sons honored. So a CEO lent them his private jet.
http://www.upworthy.com/3-moms-had-...ns-honored-so-a-ceo-lent-them-his-private-jet
Log in or register to reply now!

News The death of an American hero