Would you be excited when seeing this?

A few years ago I borrowed my friends camera and took these photos of one of my moms paintings. 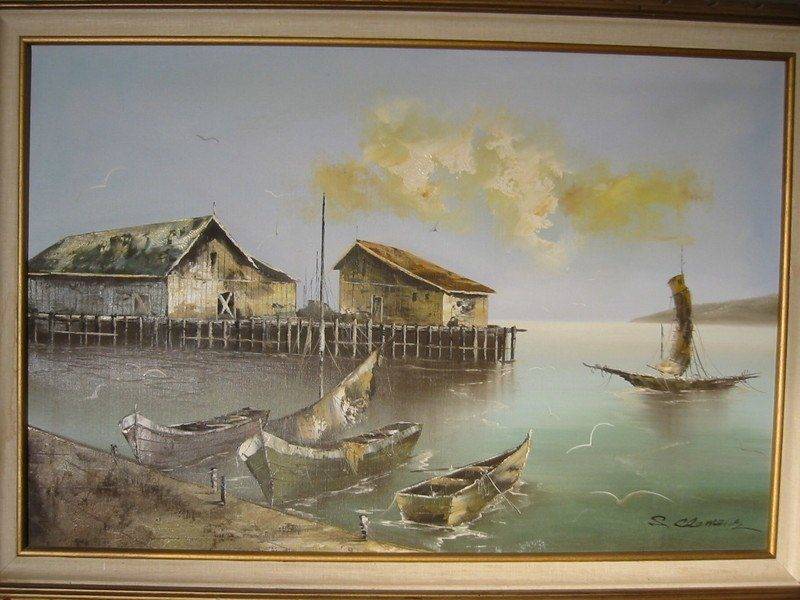 Close-up of the signature. 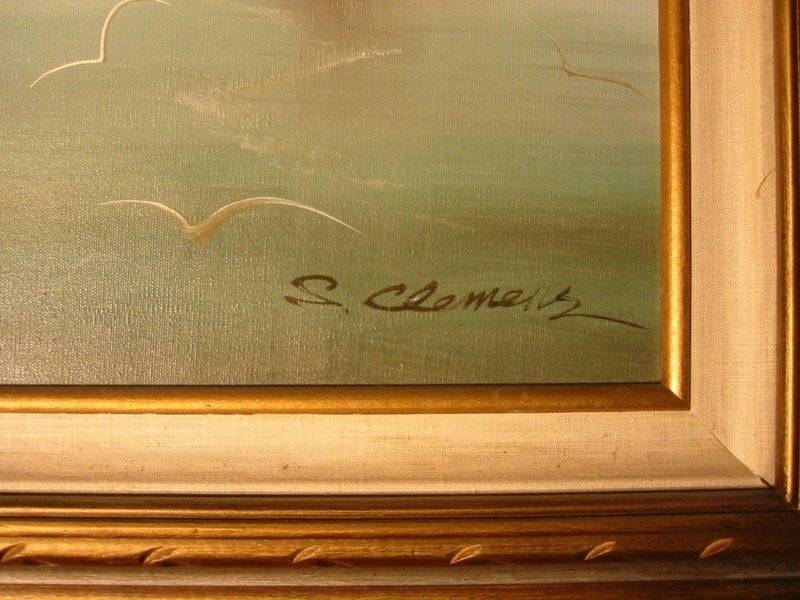 Now compare to this signature. 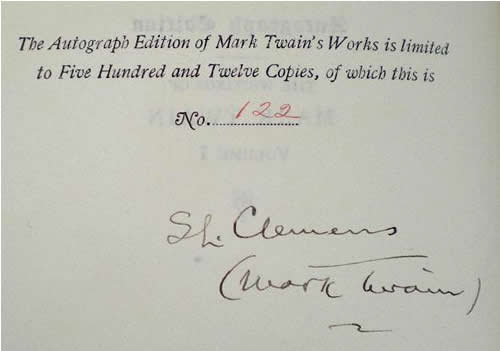 I got excited. :surprised

Have you talked to any experts about it?

Hiding in plain sight as they say, huh, Don, get that sucker appraised by two
or three legitimate art/history experts.

Apart from the letters being in the same order (except for the L) what exactly is the similarity between the two signatures?

The S s m and n are all formed in completely different ways. For eaxmple look at the down-strokes on the m and n. On the painting they slope one way, and the down strokes stop and reverse direction. On the signature they slope the other way and the pen moves in a continuous wiggly line.
Andre

True but an autograph on a painting is not writted but painted. Try it and you'll see you have quite a different handwriting ...erm handpainting.

Experts may know indeed, but I would not hold my breath.
dlgoff
Science Advisor
Gold Member

If it were the real thing, I'd probably be out spending money instead of posting this.


I received your pictures and see why you thought it might be Mark Twain's signature. It does bear quite a strong resemblance to Sam Clemens' written signature. I've attached a link to a very good Twain site with samples of variations on Clemens' signature in case you haven't seen it.

I'll give you my opinion, for what it's worth, and a couple of other places you might want to contact.

First of all, the painting itself looks to me to be later in style and execution , that is, mid-twentieth century or later. It has the look of a study from a painting class - that sort of thing. I'm certainly not an expert in those matters so you might want to get someone from a museum or gallery to give you an opinion on that.

Second, I find no evidence as yet that Clemens ever spent the kind of time studying or practicing that would have allowed him to produce this sort of work. You might want to check out his essay, "Instructions in Art" where he talks about his own art work and illustrates the piece with drawings. As is often the case with Clemens, the essay is tongue in cheek and the drawings are humorous. They are however, typical of anything I've ever seen in terms of Clemens drawing. This essay appears in "Complete Humorous Tales and Sketches of Mark Twain" edited by Charles Neider and also in "Mark Twain Himself" by Milton Meltzer which you should be able to find at a local library. If you can't, let me know and I'll send you a copy of the essay.

Third, it was uncomon for Clemens to sign himself as "S.Clemens" without the "L", but as you'll see from the web page, there are a lot of variations to his signature. I haven't done a close comparison but at first glance yours looks a lot like that of Samuel Clemens the writer.

Clemens did have a third cousin, Cyril who maintained an extensive Twain collection for many years and also had a son, Samuel who was born in 1939. If your painting is not by Samuel Langhorne Clemens - and I find it quite unlikely that it is - it may be the case that it was done by this Samuel Clemens, the son of Cyril. Cyril lived in the mid-West and Samuel would have been about the right age to have been painting in this style unless I miss my guess so there may be a connection to Mark Twain in that way. I haven't found any evidence of that as yet either, but it might help account for the similarities in the signature.

It may also be that it's just some painter named Clemens - but, as you were perceptive enough to note, the signature is very much like that of Samuel Clemens (Mark Twain) so it seems there's something going on here.

Lastly, I think you ought to get another opinion or two. You might want to send your attachments to Vic Fischer at the Mark Twain papers in Berkeley and see what he might be able to add. In the meantime I'll see what else I can find.

dlgoff said:
If it were the real thing, I'd probably be out spending money instead of posting this.

That's good advice, Don. I have seen no evidence that Samuel L. Clemens ever engaged in anything more advanced than rough sketches - certainly not paintings of this style. Note the bold use of color in the clouds and the stylized gulls. I'd have a hard time putting this painting anywhere in the 19th C.
dlgoff
Science Advisor
Gold Member

This is what my mother said about it back then while she could still remember.

"Bought in Jeffersonville Indiana at a yard sale at a big house overlooking the Ohio River, directly across from Louisville, Ky. The lady who sold it to me said her husband had it in his office and removed it to redecorate. I believe he was a doctor in Louisville, Ky."

At the time, I even took the painting down and looked at the frame that the canvas was stretched on. It was a company in NY that was out of business; which got me excited again. However on further investigation, it looks like the painting was done in the '60s.
AlephZero
Science Advisor
Homework Helper

dlgoff said:
However on further investigation, it looks like the painting was done in the '60s.

FWIW the general style looks similar to the "chocolate box art" that is sold at touring "art fairs" in the UK (i.e. they hire rooms in a hotel etc for a couple of days, then move on). I guess the people who produce it make money from it otherwise they wouldn't bother, but if they sign themselves Constable or Turner it ain't necessarily so!
dlgoff
Science Advisor
Gold Member

AlephZero said:
FWIW the general style looks similar to the "chocolate box art" that is sold at touring "art fairs" in the UK (i.e. they hire rooms in a hotel etc for a couple of days, then move on). I guess the people who produce it make money from it otherwise they wouldn't bother, but if they sign themselves Constable or Turner it ain't necessarily so!

I kept a text document of all my email correspondence and research on finding out about this painting. I'm going to add this to the file.

If you read "Instructions In Art" you'll see that Mark Twain knew himself to have no artistic ability whatever. The humor of the piece derives from the juxtaposition of his hilariously bad sketches and his naively grandiose remarks about them, peppered with hapless art jargon:


Mark Twain said:
This creation is different from any of the other works. The others are from real life, but this is an example of still-life; so called because it is a portrayal of a fancy only, a thing which has no actual and active existence. The purpose of a still-life picture is to concrete to the eye the spiritual, the intangible, a something which we feel, but cannot see with the fleshy vision -- such as joy, sorrow, resentment, and so on. This is best achieved by the employment of that treatment which we call the impressionist, in the trade. The present example is an impressionist picture, done in distemper, with a chiaroscuro motif modified by monochromatic technique, so as to secure tenderness of feeling and spirituality of expression. At a first glance it would seem to be a Botticelli, but it is not that; it is only a humble imitation of that great master of longness and slimness and limbfulness.

The work is imagined from Greek story, and represents Proserpine or Persepolis, or one of those other Bacchantes doing the solemnities of welcome before the altar of Isis upon the arrival of the annual shipload of Athenian youths in the island of Minos to be sacrificed in appeasement of the Dordonian Cyclops.

The figure symbolizes solemn joy. It is severely Greek, therefore does not call details of drapery or other factitious helps to its aid, but depends wholly upon grace of action and symmetry of contour for its effects. It is intended to be viewed from the south or southeast, and I think that that is best; for while it expresses more and larger joy when viewed from the east or the north, the features of the face are too much foreshortened and wormy when viewed from that point. That thing in the right hand is not a skillet; it is a tambourine.

If he had been able to paint, we would almost certainly know it. Every biography of, for example, Feynman and Churchill, points out that they had some decent artistic skills. I have never run across any such assertion about Mark Twain.
dlgoff
Science Advisor
Gold Member

zoobyshoe said:
If he had been able to paint, we would almost certainly know it. Every biography of, for example, Feynman and Churchill, points out that they had some decent artistic skills. I have never run across any such assertion about Mark Twain.

Thanks for that zooby. Sketches were all he ever did.
zoobyshoe

dlgoff said:
Thanks for that zooby. Sketches were all he ever did.

I wouldn't even call those "sketches". They're only about one rung up the evolutionary ladder above stick figures.

Here's something I found googling that helps make a big mushy mess of the subject:

Related Threads on Would you be excited when seeing this?

Which would you rather see?

News For Republicans: Who would you liek to see become president?

What Smiley's would you just LOVE to see?

News For Democrats: Who would you love to see as president?

Which Actors would you like to see go head2head?

Would you want to see cutting edge theoretical debates?

How much would you pay to see Pacquiao vs. Mayweather?

You Have got to see this

What would we see?