TL;DR Summary
How far away were galaxies when they emitted the light we now see?

If we had a way to measure the apparent distance to 13billion light year galaxies (parallax or something) what would it be? The light left the source 13 billion years ago, so it would appear much closer.
I can't find an answer and I'm hoping you know.

The proper distance at emission of all the light being received now is shown on the light-cone graph below: 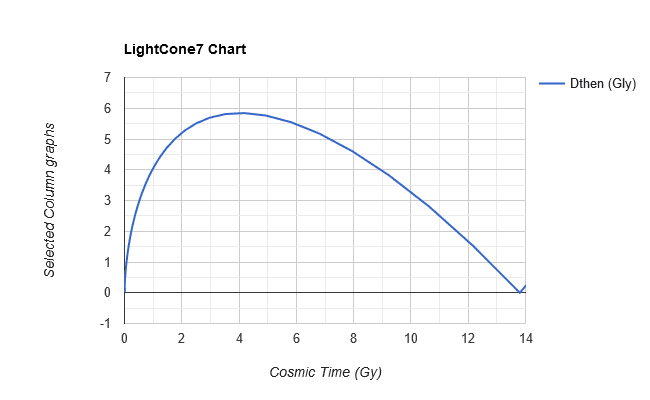 Think of it as tracing all the light from all the galaxies which were emitting at different times on the x axis, and which we observe now (at the 13.8 point on the x axis). So e.g. a galaxy which emitted light 2 billion years ago (11.8 Gy after the big bang), and whose light we are just receiving, was approx 1.75 billion light years distant.
The oldest light we can see, from the CMB, would be near the left edge of the x-axis (at the ~380 thousand point, translating to approx. 44 million light-years on the y axis).
Whereas the farthest emitters emitted their light approximately 9 billion years ago, when they were less than 6 Gly distant.
gptodd

B How did Earth get so far away from other galaxies?

I Measuring the rotation curve of galaxies

I Orbital Velocities and Mass Distribution in Galaxies

I Why do galaxies spin?
2

B The configuration of galaxies in space

I MOND from galaxies that are fractal

I How on Earth This is possible? (distance to a far galaxy)

I How to find the distance from a star to the center of the Milky Way Galaxy?

B Distance of Stars / Size of the Universe calculation

I How far away are stars in a typical star cluster from each other?