A chemist dissolves 16mmol of a nucleoside diphosphate, CDP, in 1L of an aqueous solution containing Mg2+ and buffers the solution at pH 8.7. The chemist monitor the reaction by measuring the amount of inorganic phosphate produced. No reaction is detected for 30mins, then the reaction proceeds at a constant rate until it stops with a final HPO42- concentration of 8mM. The recovered polymer contains 7.5mmol of cystosine

There are a few gen-chem assumptions in question that in this question that im not understanding. First though, am i right in saying that 16mmol in 1L aqueous solution = .016M?

instantresults said:
am i right in saying that 16mmol in 1L aqueous solution = .016M

A chemist dissolves 16mmol of a nucleoside diphosphate, CDP, in 1L of an aqueous solution containing Mg2+ and buffers the solution at pH 8.7. The chemist monitor the reaction by measuring the amount of inorganic phosphate produced. No reaction is detected for 30mins, then the reaction proceeds at a constant rate until it stops with a final HPO42- concentration of 8mM. The recovered polymer contains 7.5mmol of cystosine

There are a few gen-chem assumptions in question that in this question that im not understanding. First though, am i right in saying that 16mmol in 1L aqueous solution = .016M?

Tell us what the question is!
Is it the bit I have bolded from the 'relevant equations' section?
Moles in a litre = molarity you sure should know.
Even though the answer to that question does not depend on it at all!
If that is the question we are not supposed to supply answers, but you need to get to the stage where you can just say off of the top of your head that the answer ratio which I'm not telling you is 100, because the difference between pK and pH is 2 which is log(100) - you work out the detail.

This is hopefully just a part of some less trivial question like what is the pH at the end of the reaction?* Which reaction seems to be that of polynucleotide phosphorylase, the enzyme that was a red herring for a number of years in the history of molecular biology. Another untrivial question would be what would be the explanation of that peculiar kinetics, which you are not to take too too all-or-nothing literally.

* Actually that is pretty much off of the top of your head thinking too.

Two weeks that the original questioner has never come back, I think I can give some answers now - and put the questioner in my black book, see my sig. The question asked was probably part of a bigger one that raises several issues of interest, though apparently not to the student.

Firstly the reaction is or appears to be 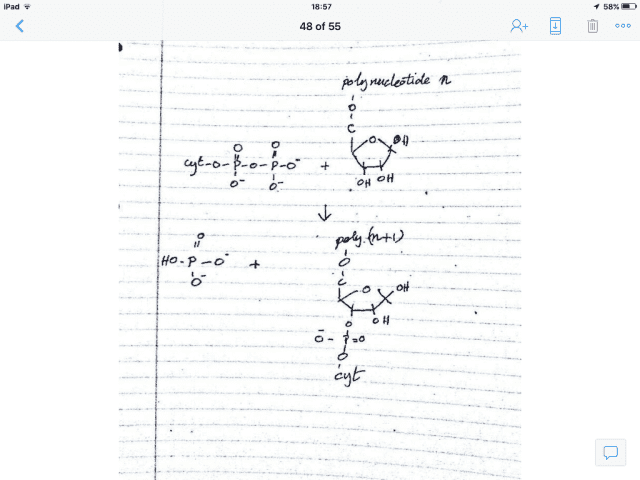 The name 'phosphorylase' refers to the reverse of the reaction I illustrated and that the problem is about. The enzyme's function is principally (it's complicated) degradative. When it was first discovered people were looking for the enzyme(s) that could synthesise RNA. This was the first that was found. It didn't really fit as the hoped-for transcription enzyme, there was no DNA dependence. But at least it was an enzyme that made polynucleotides, it seemed, so some sort of important RNA synthesising property. It was early on felt somewhat surprising it worked with nucleoside di- rather than tri-phosphates. A significant principle here - the equilibrium of the reaction is such that in vivo it is able to degrade rather than synthesise polyribonucleotides. Nearly all polyribonucleotide and polydeoxydeoxyribonucleotide biosynthesis proceeds through triphosphates with reactions analogous to the one illustrated except that the immediate product is inorganic pyrophosphate (P2O7)3- (well that's what it would nearly all be at pH 8.5). The pyrophosphate is hydrolysed by pyrophosphatase, and so the reaction in the cell is driven in the synthetic direction by the hydrolysis of two, not one, anhydride bonds.

Why is there a delay of half an hour before the reaction starts.going? Well considering the enzyme is really degradative, you would quite expect it to have a site that recognises a certain length of polynucleotide, maybe four to six residues. (or even grasps the ribonucleotide at two sequences quite separated along the strand, I haven't looked into it). But if it is given only mononucleotide it probably has low-affinity and/or low catalytic activity. So it polymerises very slowly at first, making small oligonucleotides. When any of them as result of this slow process have reached a certain length, and then it can really get going fast. In fact if you start with a decent length oligonucleotide in the mixture the reaction is seen to start immediately. A similar effect is found with another enzyme, terminal transferase, that can synthesise polydeoxyribonucleiotides starting from deoxytriphosphates.

I don't know why the problem-setters chose to make the reaction go exactly halfway, and was misled by that to think you could easily calculate final pH assuming the solution unbuffered except by the nucleotides. In fact this is wrong also because the reaction does not release any protons. I am assuming that the pK's in CDP are similar to those in inorganic pyrophosphate. Actually I found it hard to find amongst the prolific pK tables any data for di- and triphosphates, so I assume they are similar to inorganic pyrophosphate. If anyone knows any source please tell me.

Then I suppose the OP has noticed and explained the discrepancy between the production of phosphate and the cytosine Incorporated (though there seems confusion between mM amd mmol). You can't explain this unless you ask the scientific question - how was it measured? Almost certainly they were using the easiest method these days other methods have become easier than they were. The easiest method was to have the CMP labelled (e.g.in alpha 32P phosphate, or else tritium or carbon labelled somewhere) and precipitate high molecular weight products with trichloracetic acid aloing with carrier high-MW polynucleotide*. That however does not precipitate oligonucleotides less than 20 residues long. So a small proportion of polynucleotide (though may be a large proportion of molecules!) would not be precipitated.

So this question connects to several important themes. IMO it leads faster to learning, familiarity, and joined-up competence in a subject to follow up these leads and connections a bit than to passively wait until they come up in the course. Probably someone else here has the competence to summarise in a paragraph some understanding of the biological role of this enzyme, connection with poly-A etc.


* A protocol is here:
https://www.thermofisher.com/it/en/...r-trichloroacetic-acid-tca-precipitation.html
Last edited: Feb 27, 2017
Log in or register to reply now!

PH of a buffer solution