Conservation of Momentum for 1D Motion

In this problem, there are two "events" in which a larger mass splits up into two smaller ones. In introductory physics, these events are often described as "explosions" as a sort of opposite to "collisions". But whatever name you choose to give to the events, it is helpful to apply conservation of momentum TWICE. Once for each "splitting" event.

momentum before = momentum after

Use conservation of momentum in this situation to determine the velocity of the cart after Fuzzy jumps off. Then apply that velocity as an initial condition to event 2:

momentum before = momentum after

k I did my work, but I still got the wrong answer. I'll scan my work.
whoareyou

I still end up with the wrong answer. The correct answer is 0.685m/s. 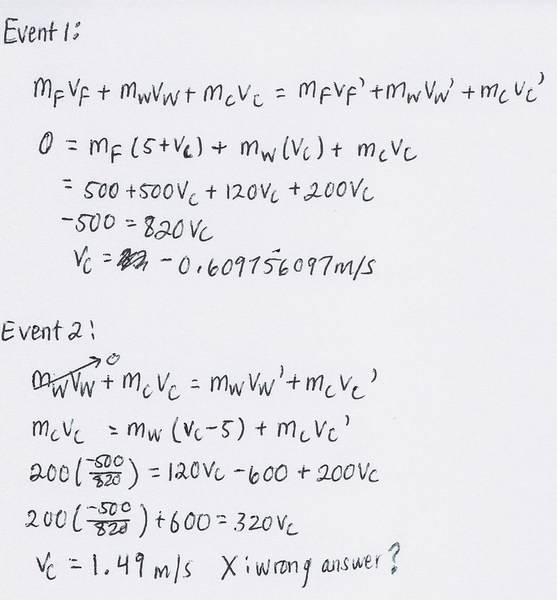 You're complicating this TOO much. Initially there is ONE object of mass Mtot = mw + mf + mc

After event 1, there are TWO objects, one of mass mf, and one of mass M = mw + mc. So, conservation of momentum says:

where v is what I'm calling the velocity of (cart + Wuzzy) after Fuzzy jumps off.

Now, let's arbitrarily choose North as the positive direction. We are told that Fuzzy moves at speed +5 m/s relative to M, or in other words,

DON'T PLUG IN ANY NUMBERS YET. What would be the point? It would just introduce needless intermediate arithmetic steps. Keep things algebraic until you have the expression that will allow you compute the final answer.

For event 2, we initially have one object of mass M moving with velocity v. After the collision, we have two objects of mass mc and mw. Conservation of momentum says that:

Now, we are told that Wuzzy is moving at a velocity of -5 m/s relative to the cart. In other words:

Substituting this into the consv. of momentum equation:

Now, substituting in the expression for v, this becomes:

I encourage you to scrutinize every step of this solution, and if there's something you don't understand, ask me about it. The physics of the problem is easy. It is merely algebraically messy.
whoareyou

After reading only the first two lines, I redid it and got the right answer! Thanks for your help!
Share:
Share

Related Threads on Conservation of Momentum and Relative Velocity Problem

Relative velocity and conservation of momentum

Momentum and Conservation of Momentum Problem

I
Momentum and Conservation of Momentum Problem