How much of our brain do we actually use?

Yeah I was told by a friend we only used 90% of our brains? Is this true?

Way back in the 1920s, some newspaper published somebody's idea that we only use 10% of our brain. Needless to say, almost nothing was known about the living brain in those days, and the opinion was worthless. However it got picked up and turned into an urban legend as friend heard it and retold it to friend. Your friend was a link in such a chain, but he got the percentages backwards.
eeka chu

Our brains function like multicore CPU, with each core being specialised at a particular task. When that task isn't required, that area of the brain shows decreased levels of activity. Because the areas seem to be somewhat specialised, the areas with decreased levels of activity don't, or more likely can't, pick up work from the one's that are busy.

So, when you image someone's brain, you can find that quite a lot of the brain tissue isn't actually doing much. It's not helped by the fact that a lot of activity scans are extremely specific, for instance, noting colours or smells and nothing else. In such a test, you'd expect to see only small areas of activity, and that's what they're after so's that they can try to pinpoint specific areas related to specific tasks. If you were walking down an unfamiliar street, much more of your brain would probably start coming on as each of the 'cores' began evaluating the new environment.
somasimple
Gold Member

Normally we are using around 70% of our brain ressources but fortunately not at the same time. (temperature problem).

The myth of the 10% is just an old meme to forget.
Rach3
Is it a well-defined question? What quantitive measure can it be answered with? I don't think looking at an MRI and measuring the volume in which there is activity addresses this.
Rach3
The title of this thread is quite ironic, by the way.
michaelr

there is only a small portion of our brain we use at any given time
as to say yes or no and know the meaning at that time given. In other
words on a yes reply your brain is giving you the go ahead in acceptance
to where if you used the total brain you would crash
Mk

Normally we are using around 70% of our brain ressources but fortunately not at the same time. (temperature problem).

Where does the 70% come from?
michaelr

If you have to use 70% of your brain just to answer a question
yes or no somethings wrong. most people would use up about
5% of their brain to hear a question and about 5% to answer yes or no
to say it took 70% is astronormical.
Moonbear
Staff Emeritus
Science Advisor
Gold Member

eeka chu said:
So, when you image someone's brain, you can find that quite a lot of the brain tissue isn't actually doing much.

That's why I'm interested to know whether there even exists a meaningful, quantitative way to ask this question. Given that the whole business is emergent phenomena, I'm leaning towards "no".
selfAdjoint
Staff Emeritus
Gold Member
Dearly Missed

Rach3 said:
That's why I'm interested to know whether there even exists a meaningful, quantitative way to ask this question. Given that the whole business is emergent phenomena, I'm leaning towards "no".

What percentage of the internet is active at any given moment? I agree with you; it's very close to a meaningless question as stated.
eeka chu

That's a good point, but even still I don't think our brain is running anywhere near it's full capacity all of the time. If it was, we could expect to see very little / next to no change when you asked the person to concentrate on something specific, like a picture of a flower on a screen. Neither would there be much of a difference between normal, sitting around the house doing nothing levels of concentration and revision / idea generation levels. Where as we all know from personal experience that there's a big difference.

The brain lives in a dynamic environment and doesn't process things like a computer (one block after another), it has to work on demand a lot of the time and can't afford to go out of real time to formulate answers for things - least it be flattend by the approaching bus. So it's a good thing it has at least some degree of dynamic range spare for complex problems that require an immediate solution.
somasimple
Gold Member

I saw a scientific emission which stated it.

As I said, it was only a computation with oxygen consumption and heat produced?! If the percentage was reached, temperature rises to dangerous level. But it may be only a meme.
pallidin

Isn't this kind of like asking "how much our arms do we actually use"
If you are resting, I suppose one's arms are not used much. But if one is lifting something, I suppose the usage is greater.

So isn't the "usage" conditional on situational application?

But perhaps you are rather asking if one can increase the potential capacity. If that's the case, using the example of arms, one could increase their lifting capacity by nutrition and exercise training.

Okay, let refine the question to how much of our brain do we use through are entire life time for any action like walking, talking, watching girls, playing games, thinking. Everything, what percent don't we ever use, or don't now how we use it.
citizen

The brain isn't really my specialty so please forgive me if this question is "dumb"...
If we could potentially use 100% of our brains at any given time then why do we forget things? It would seem where I parked would be well within the brain capacity and yet I have forgotten where I parked before...
DaveC426913
Gold Member

citizen said:
The brain isn't really my specialty so please forgive me if this question is "dumb"...
If we could potentially use 100% of our brains at any given time then why do we forget things? It would seem where I parked would be well within the brain capacity and yet I have forgotten where I parked before...

This is really about memeory retrieval. We are so busy with a million thoughts at once, we often have lose track of, not the memory, but the "tag" that allows us to retrieve the memory easily.

I'll bet dollars to donuts that,once you found your car again, you "re-remembered" its location. If you had actually lost the memory, you would look at your car and say "huh, I honestly still do not remember parking it here."

It's even more pronounced when someone tries to make you remember a movie you saw a long time ago.
"Remember? We saw it downtown at the Imperial theatre."
"Don't remember."
"In July?"
"Don't remember."
"It had Peter Mayhew in it."
"Huh?"
"There was a circular chess board?"
"Nope, nuthin'"
"You got sick on the popcorn."
"Oh yeah. Coming back to me now.."
"Big guy in black. Wears an coffee maker on his chest. Makes sounds like a vaporizer?"
Oh yeah! Star Wars!
neurocomp2003

with the thread title....perhaps people should define the concept of "use" in relation to the brain as pertaining to the question

"how mcuh of our brain do we use".
On a related question one could ask what is the longest time interval to which a neuron could remain idle or not fire an AP?
PhoenixSH

I hope no-one will mind my personal input.

I have always had the understanding that normally when inactive the baseline for the Humanoid brain is at roughly 3% 'three percent' usage.

This allows for all running processes to be dealt with in real-time from beating of the heart to full body movement. The next 6 to 7 percent is utilized for more advanced higher level functions, such as memory recall, imagination and other activities that can are apart of someone's over all development.

I am also under the belief that people whose brains operate above the primary active line are those whom have better memories, faster reactions or are in short natural born brillant minds. This is the work of mental development and to my limited knowledge can not bypass the 30 to 35 percentage rate.

But this is still an emerging field of study and so my beliefs may be unfounded. But to all that I know anything above the 25 percentage rating allows for possible Telepathic or even Empathic abilities. Based on the sections of the brain active in real-time operations this can determine the level of what people call ESP 'extra sensory preception'.

I mention this to add to the equation that will possibily lead to a future running answer to the overall question how much of our brain do we actually use? But for the most part if you are looking at physical section usage, then the best answer that I can give is within someone's life time they use a total of 60 someodd percent of the physical mass of their brain. Early in childhood we use sections that become dormant during our development and as thus there are things that as children we know as fact but as adults we tend to dismiss without a second thought.

I apologize if I am over stepping my boounds with this posting.
DaveC426913
Gold Member

PhoenixSH said:
I have always had the understanding that normally when inactive the baseline for the Humanoid brain is at roughly 3% 'three percent' usage. 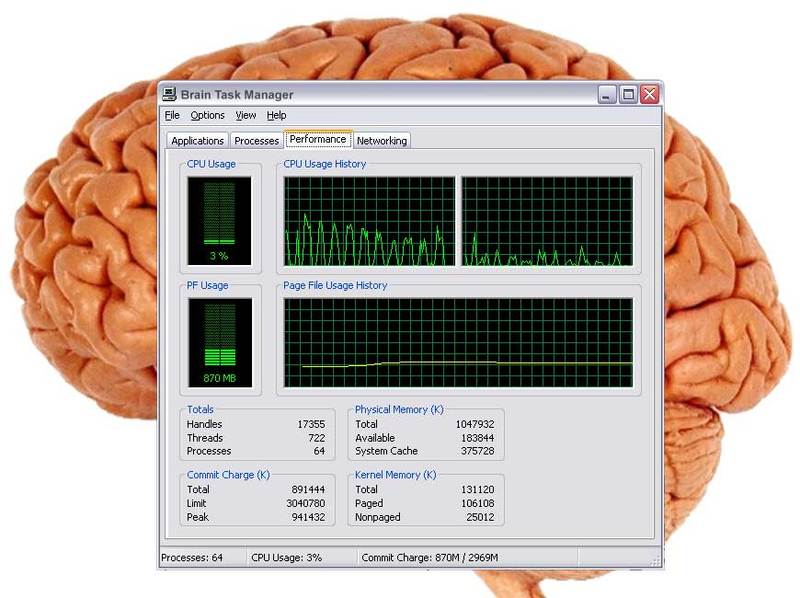 I want to see what's on the Applications tab...
Log in or register to reply now!

Related Threads on How much of our brain do we actually use?

How much energy does the brain use in different circumstances?

How much do we know ?

How do we control our thinking?

Medical Why do we have head aches? Our brains can't feel anything.

Where in the brain do we sense our internal organs?

Medical How does our brain create a summarized/average representation

Medical How fast can our brain respond?

How much gold do we have in the earth?

Medical How much does the blood pressure in your brain increase?