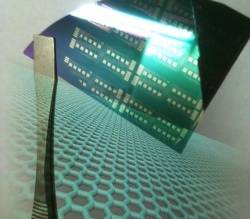 Physicists at Penn State have provided a mechanism by which information can be recovered from black holes, those regions of space where gravity is so strong that, according to Einstein's theory of general relativity, not even light can escape. The team's findings pave the way toward ending a decades-long debate sparked by renowned physicist Steven Hawking. The team's work will be published in the 20 May 2008 issue of the journal Physical Review Letters

So the information-loss paradox is resolved by making space-time discontinuous. Sounds like scale relativity has triumphed once again.
RandallB

Even from a broad view of this I don’t see where or believe this will show any prospect that any real “information can be recovered”.
Gordie Ross

If light is a vibration in space time, then there is nothing to escape. If heavily compressed matter creates a situation where there is no room for space, then light will just focus, go around the mass bounce around with total energy conservation and concentrate itself.

It looks to me that this is what it does, it then eminates as fierce waves of electromagnetism from the "centre/edge" of the black hole.

If the mass disintegrates allowing space time to reoccupy the void created by the mass, this would account for the disolving that is described.

There is never a loss of data at any point... it may have to take a long path to make around the big lump of mass that is in it's way, but ultimately it makes it around.

The fact that the information is obscured as it weaves past the matter that obstructs it and does not present itself outside the immediate locality does not mean it has ceased to be represented.
Last edited: May 20, 2008
Share:
Share

A Is there a lost information paradox for quantum physics?

I Predetermination in quantum theory and information theory

B How does the EPR paradox work?

I What is the physical meaning of concurence (quantum information)?

A Klein paradox in the massless case

I What is the paradox in the EPR paradox?

I Information diagram for entangled particles?