Is a 3d printer a good investment?

I was thinking of buying this: http://printrbot.com/shop/simple-metal-kit/ [Broken]

I have never used or bought a 3d printer, but I don't feel like going for a prototyping station with all my CAD models to constantly print small parts, so before jumping in the deep pool I'd like to ask some questions for people who know more than me about 3d printing.

Is arduino, general engineering and handyman knowledge enough to assemble this by oneself?

Will this quality of print and PLA material be able to print working 20mm pitch diameter gears, and gear racks of similar sizes for prototyping?

Is this sort of 3d printer meant for engineering and prototyping or would Is this just something to create statues and gimmicks?

Should I wait a few months of after xmas for the price do drop or is it lowest at his point?

Since I'm already paying 540$ should I just go all the way and buy the heated platform one?

Am I making the right choice with a 3d printer for beginners or are there more professional/sturdy printers out there in a similar price range?

Sorry if I am being off topic and thanks in advance!
-Gabriel 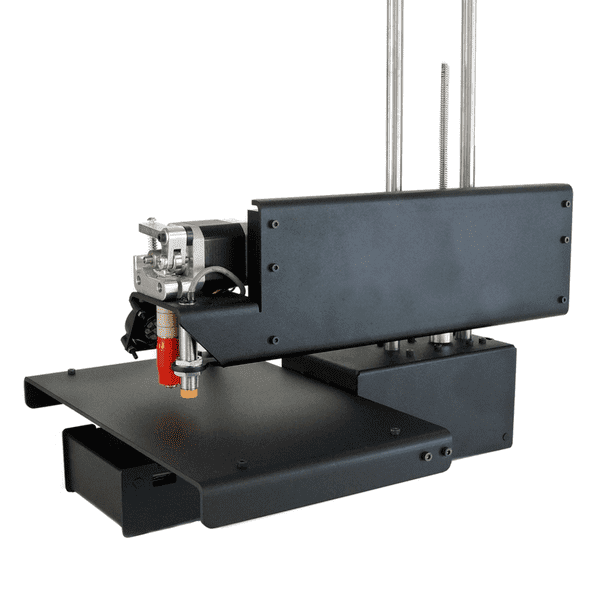 I don't know about this particular model, but I will point out something that might be a nuisance for you when printing gears. All of the ones that I've read about require that you do a wee bit of final filing/sanding to eliminate minor errors. You might get tired of "brushing their teeth" after a while.
That's not going to stop me from buying one as soon as I can afford it, though. (I'll need a bigger build volume for my stuff.)
streety

The latest issue of Make magazine is dedicated to 3D printing. They review quite a few different models on a variety of different metrics.

I dont have my copy with me at the moment but will try to revisit this thread later.

I don't have any personal experience with 3D printers but my guess would be you'll be able to get it working and they will handle that pitch without issue up to a certain strain. Not sure what that would be though.
256bits
Gold Member

Depending upon what you get, you can make much more than gears.
prosthtics
http://inhabitat.com/3d-printed-prosthetic-legs-allow-derby-the-dog-to-run-for-the-first-time/

3D printing has come a long way, so inform yourself on capabilities, which goes without saying.

Why should the price drop after Christmas? Not sure if 3D printers follow box store pricing models.
Danger
Gold Member

The price is far more likely to follow component costs, since most printers are "Maker Bots" which are sold by someone who prints the components on his own machine and then sells them essentially at cost plus shipping. There are 2 versions of that, one which is plastic parts only, and the metal bits and electronics have to be outsourced, and complete kits. Both are assembled by the purchaser and are thousands of dollars cheaper than the commercial units.
256bits
Gold Member

The Maker Bot is great tool for basic modeling. You can indeed do interfacing of gears etc. With that said, it is not for high end modeling. A unit using ABS materials and closer tolerances will start at $10,000.00 or more. Units that create metallic parts are over $1,000,000.00.
streety

I've finally remembered to revisit this thread with my copy of Make magazine in hand. The Printrbot Simple Metal is listed as one of the standout units, described as the "thin wallet win".

It also scores well for print quality. Out of ~23 printers it is tied for second place. The top scoring printer is the Ultimaker 2.

Apparently it is able to use ABS material if it has the heated bed so that may well be worthwhile considering.
Jarfi

streety said:
I've finally remembered to revisit this thread with my copy of Make magazine in hand. The Printrbot Simple Metal is listed as one of the standout units, described as the "thin wallet win".

It also scores well for print quality. Out of ~23 printers it is tied for second place. The top scoring printer is the Ultimaker 2.

Apparently it is able to use ABS material if it has the heated bed so that may well be worthwhile considering.

That is reassuring to hear. Yup it is almost ridiculously cheap and I assume the price will only drop over time, Printrbot Simple Metal seems to be getting excellent reviews in all places too so I will probably be going for the heated bed one, might as well make a proper buy.


Not sure about the legitimacy of this video experiment though.
larthen

Hi I actually own a 3D printer. It's from a reprap family Prusa i3 - I build it from a DIY kit and it costed me under 500eur. It prints in whatever material you want as long as you have a proper hotend (melting head) in place. My hotend deals with temperatures up to 260C, so it is ok for both ABS and PLA. However until now I was printing only with PLA and started with thermoplastic polyurethane. If you need to go higher (e.g. to print from polycarbonate or some thicker nylon) you may need to get a full metal hotend.

As for precision - believe it or not - all FDM printers (those using filament, melting it and extruding, line by line) are similar - I can print parts with tolerance in X/Y of +/- 0,07mm. And I didn' see any printout that would be more precise - I can actually plan how fine should a fit between parts be. For me to make prototypes of my design it works great.
Most commercially available 3D printers (black boxes) have a limit of layer hight of 0,2mm. Some allow to print 0,1mm. With open hardware (reprap) you can try lower heights - I got as low as 0,04mm with successful print, however a lot depends on filament you use (also color) as some have higher viscosity which will not allow that.
Main difference between printers is the top print speed - however the borderline does not go between black-box or open-hardware printers, but between different constructions and their stiffness.

If you need higher procesion, than look for SLA printer (using photo-hardening resins) - however for these type price per cm2 of print space is still much higher. But it will come down probably in this year, as some patents become open in 2014, so somebody will surely create a reprap for this type of 3D printer (there are already some early trials).

And yes, the film in previous post is true - PLA has significantly higher yield stress than ABS. It has also smaller thermal contraction, so unless you have a printer with closed printing space and temperature control inside - I would use PLA as it is more resistant to unplanned external cooling. And one important thing: with PLA you can print <0,1mm layers - with ABS you can't go below 0,2mm due to higher viscosity. In short - if you want higher precision - use PLA.

PLA has some limitations however, main one is that it starts to loose its rigidity at 60-70C (depending on color). So if you foresee higher temps in your device, it may not be suitable. If only for gears - it should do the job - of course don't forget to grease it ;-) The other is it's low fatigue resistance - you will not be able to make a flexible hinge out of it that will last for long - with ABS it will last a bit longer, but of course not as long as from PP (though I haven't seen any PP filament so far).

3D printer is a great investment for someone often doing design (professionally or as a hobby) and has knowledge of CAD software. Even if you build yourself the printer, it is still a magic to see a design coming from the screen into real thing so fast! :)
But if you need it only on occassion, I would first order some printouts from somebody having a 3D printer (person or a company) for you to see if that is what you need.

I used a DYI kit from this company: http://jelwek.pl/en/6-3d-printers
They have now also this Prusa XL version and smaller Mark34 if you are interested - though I am only a quite happy customer not their rep :)
satchurated

Check zortrax m200 printer. It has a resolution of 90 microns, the highest for fdm type, and with further upgrading/updating, will hit 50 microns. The price? 1600€
Share:
Share

Related Threads on Is a 3d printer a good investment?

Challenges in creating a 3D printer

Where Should I Start In Designing A 3D Printer?

M
Is now a good time to invest in solar?
7

T
Is this a good statics book?

A
The physics behind 3D printing