Dawn took more shots of Ceres yesterday, the 26 Jan, and a brief animation has been posted showing rotation over the course of about one hour.
https://twitter.com/NASA_Dawn/status/560077265334071297

Here is a sample frame. It's just a still--more interesting to go see the animation. It is higher resolution than what we saw earlier. 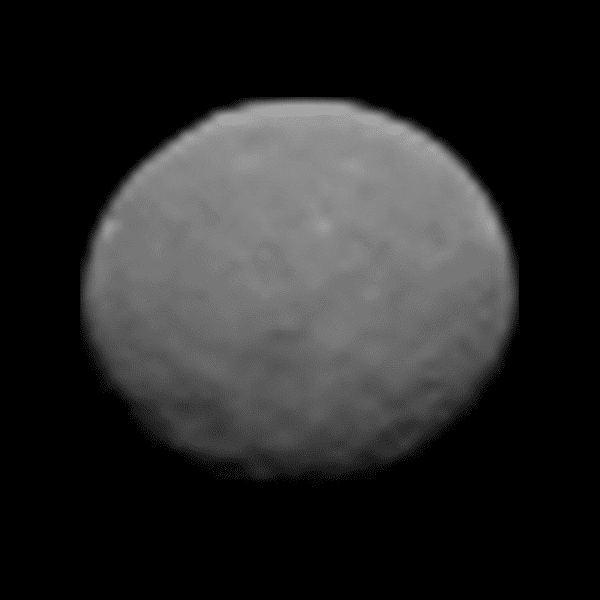 As of now, and as of 26 Jan when the sequence of shots was taken, Ceres seen from the spacecraft is roughly half the size of a full moon.

Ceres and the probe are orbiting "neck and neck" at somewhat over 17 km/second. Roughly parallel with Dawn on the inside track, nearer the sun. In addition to its orbital motion, Dawn is slowly moving out towards Ceres. It is currently about 200 thousand km from the planet and by 10 February should be within 100 thousand km.

It turns out that OmCheeto posted the same image of Ceres in another thread, about the same time. He also did some analysis of the rate the probe is slowing down as it approaches Ceres, to see if the deceleration is sufficient for it to be captured in orbit. Just barely, in fact. The approach and entry into circular orbit preparatory to survey will be tricky.
Last edited: Jan 27, 2015
Share:
Share

I How Big of an Object Orbiting Closer to the Sun Than Earth Could Be Overlooked?

I A New Idea for the Origin of Earth's Water

B Geology of Ceres illuminates origin of organics

I New source of space radiation
2