Can someone point me to a resource that describes, or describe, how the orbital speed of stars within galaxies are observed and measured?

I'm struggling with how these values can be attained with any confidence in their accuracy.

It's done by spectroscopic measurements. Any galaxy that is not aligned perfectly face-on, will exhibit rotational Doppler shift, with material on opposite edges having opposite shifts. 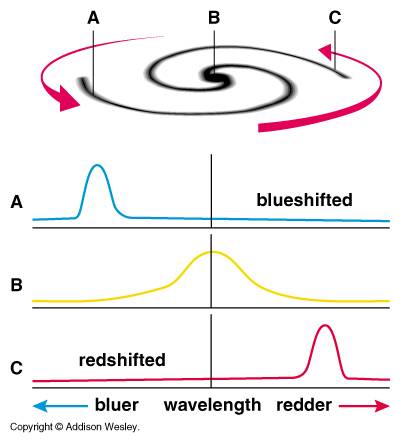 So you choose some benchmark line (e.g. Hydrogen alpha emission lines), and then compare this benchmark with Doppler shift of lines observed at some radius R from the centre. This gives you radial velocity. To get orbital velocity you need to additionally compensate for the inclination of the galactic disc (if any).
Here you can see an example measurement of H-alpha lines of a galaxy seen almost edge-on (UGC 2936): 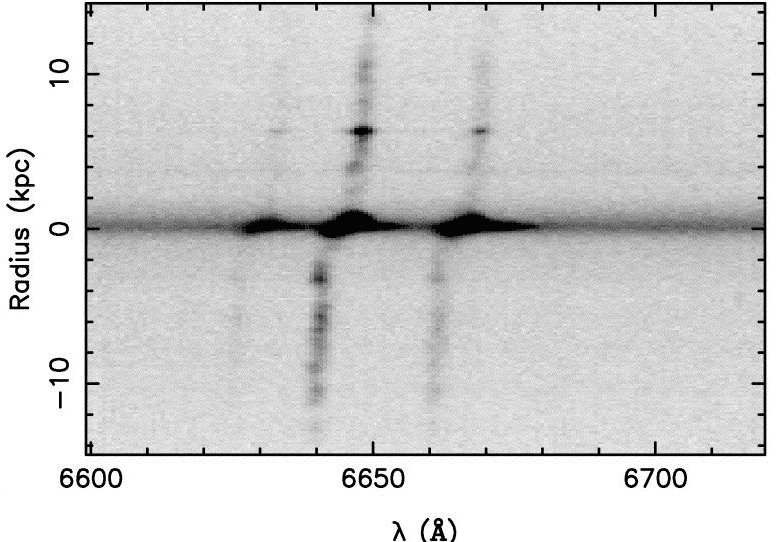 The galaxy is approx. 150 million light-years distant, and yet the Doppler shift is clearly visible, netting a pretty flat rotation curve of approx. 225 km/s.
Strange design

Thank you Bandersnatch!! That is exactly what I was looking for. So does that mean we have no real way of measuring these velocities when the galaxy is "face on?"

I am intrigued by how these values infer dark matter, and have a hard time accepting that theory rather than some error in measurement.
Bandersnatch
Science Advisor

Strange design said:
So does that mean we have no real way of measuring these velocities when the galaxy is "face on?"

None that I know of. But then again, you don't get that many of those.


Strange design said:
I am intrigued by how these values infer dark matter

In two ways:
1) the velocities at large radii are high enough for the typical estimates of baryonic matter (gas+stars) to be insufficient to keep the galaxy bound. I.e., they exceed the escape velocity you'd calculate without extra mass.
2) the velocities are almost constant across most of the galaxy (except for the centre). Recalling Kepler's laws you'd expect that the farther away from centrally-concentrated mass, the lower the orbital velocity. A flat rotation curve is characteristic of a spherically-symmetric, continuous distribution of matter. For example, it's what you'd expect the rotation to be in a spherically symmetric cloud of gas - the farther you get from its centre, the more mass there is to attract you.
You get this sort of discrepancy: 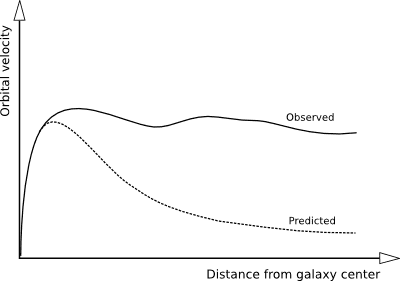 In order to maintain such flat curve, you need a lot of extra matter. Its total mass must grow linearly with radius from the galactic centre, and extend quite a bit past luminous (stellar) regions - this is because the rotation curves of hydrogen clouds orbiting beyond the galactic fringes are also measurable, and these retain the characteristic constant orbital velocity. The total amount of extra mass exceeds the visible mass by a factor of 5, so you know that's a major problem.

Measurement error is out of the question - these curves are way too common, and error bars are low.
So, we've got a few options:
- the law of gravity changes at large distances (example attempts at modifying gravity include MOND and TeVeS), so that flat curves are produced
- there is more invisible baryonic matter distributed in galactic halos than we accounted for (e.g. a very large population black holes, dim stars, etc., collectively known as MACHOs - massive compact halo objects)
- there is some extra non-baryonic matter (such as neutrinos, or some other as of yet unknown type of particles, collectively known as WIMPs - weakly interacting massive particles)

Neither one of those is especially appealing from the aesthetic standpoint, but one needs to keep in mind that nature doesn't care what we do or don't find appealing.

Each possibility has its advantages and problems, but the last one is currently favoured, as there are additional observations that seem to be supporting WIMPs. These observations include the bullet cluster, and the anisotropies of the cosmic microwave background radiation.

The last word in this (dark) matter hasn't been said yet, though.
Strange design

Thank you so much Bandersnatch! The first two seem most pallatable to me. I will take a look at MOND and TeVes and see what thats all about.
Bandersnatch
Science Advisor

Be careful in your reading - MOND, especially, tends to be hijacked by persons with dubious agendas. Stick to academic websites and blogs by scientists working in the field.

If you've never heard of either MOND nor TeVeS, this video by Sean Carroll might give you some idea of what these are about:
Sean is squarely in the Dark Matter camp, though, and in the talk he's giving his reasons for being there.
Last edited: Jul 11, 2017
snorkack

Gaia is supposed to be over 100 times more precise than Hipparcos, at 7 μ'' vs. over 1 m''.
Is Gaia expected to measure proper motions of stars in any galaxies? (As for parallax, only Magellanic clouds would show some, and with less precision than their size.)
Bandersnatch
Science Advisor

snorkack said:
Gaia is supposed to be over 100 times more precise than Hipparcos, at 7 μ'' vs. over 1 m''.
Is Gaia expected to measure proper motions of stars in any galaxies? (As for parallax, only Magellanic clouds would show some, and with less precision than their size.)

Gaia will allow kinematic mapping and membership analyses of young star-forming regions in the LMC and SMC with comparable precision to those in the Milky Way.

Looks like it will also provide astrometry data on M31, and a few galaxies outside the local group, but I'm not sure whether it's going to be for individual stars or for larger structures.
Log in or register to reply now!

Related Threads on Observing Orbital Speed of stars within Galaxies

Orbital speed of stars within galaxies?

Orbits of star in the Galaxy

The Meissner effect within a galaxy

The Effect of Planets Rotation within its Galaxy?