Predict the product of the following reactions:

Predict the major organic product of the following reactions: 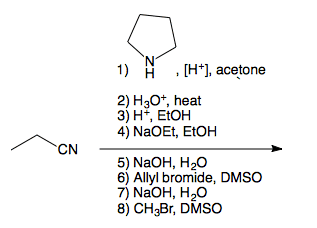 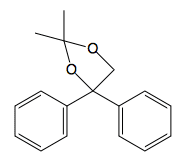 If anyone can help confirm, I'd be much obliged! Our professor is crazy and gives these types of problems for practice, and if the exam will be anything like this then I am a little scared.

Whew, these are beastly! It looks like you nailed the second one. Not so sure about the first one. I'll go through both of them step by step, starting with the second.

So the first 2 steps are a Grignard reaction with hydrolysis. The phenyl group of the Grignard reagent is a powerful nucleophile and will add to the nitrile carbon. The resulting imino base is then hydrolyzed with acid to give benzophenone:

The next step is a Wittig reaction. The methyl phosphonium ylide reacts with the carbonyl to give an alkene and a phosphine oxide:

In the next step, the osmium tetroxide adds across the double bond to give the osmate diester. The ester is then hydrolyzed to give a vicinal diol:

Finally in the last step, the acetone and the vicinal diol form an acetal in an acidic environment to give the product you got.

The first problem will take a little more time to go through, so I'll come back to it when I have a spare minute.
Last edited: Feb 7, 2017
TeethWhitener
Science Advisor
Gold Member

Alright, I'm less confident about the first problem, mainly because of steps 2-5. Many of them seem redundant to me. But step 1 is clear: the amine and the acetone combine in an acidic environment to give an enamine, which is a good nucleophile that adds to the nitrile:

Now, to me, the second and the third step seem redundant. I'm almost certain that the second step is going to hydrolyze the enamine and the imine to give a diketone. If this is the case, then the third and fourth steps together do nothing (one protonates the ketone and the other neutralizes it). However, I suspect that maybe what the professor was going for is that the second and third steps are two different hydrolysis steps, and the 4th step neutralizes the third step so that at the end of the sequence, you get the diketone:

However, your product looks significantly different from mine that I wonder if maybe these acid/base steps might cause some sort of dimerization? Regardless, assuming the hydrolysis gets you to the diketone above, steps 5 and 6 are clear. You deprotonate the very acidic carbon between the two ketones and perform an SN2 reaction on the allyl bromide to give:

The proton on the methine carbon is still very acidic (more so than the other alpha carbon protons), which leads to steps 7 and 8. You deprotonate this carbon and add methyl bromide in another SN2 reaction:

This is my best guess for the final product of problem 1. But again, if something funky is going on in steps 2-5, I can't be sure this is right.

Related Threads for: Predict the product of the following reactions:

Determine the products of all stages in the following reaction

Predict the results of the following

Reaction Prediction - Is there a reaction?

Predict the products of electrolysis

Estimate the standard reaction Gibbs energy of the following reaction:

One of the following undergoes a reaction