Question about a horizontal sundial

TL;DR Summary
How does the height of the gnomon affect the sundial

I am curious how the height of the gnomon in a horizontal sundial is dependent on your location. Why does it need to be different high depending on where you are? Does it have to do with how high the sun is in the sky depending on the latitude you are on?

I have not heard that altitude of the place matters the design of sundial. The latitude matters.
DaveC426913
Gold Member

anuttarasammyak said:
I have not heard that altitude of the place

OP said height of the gnomon. 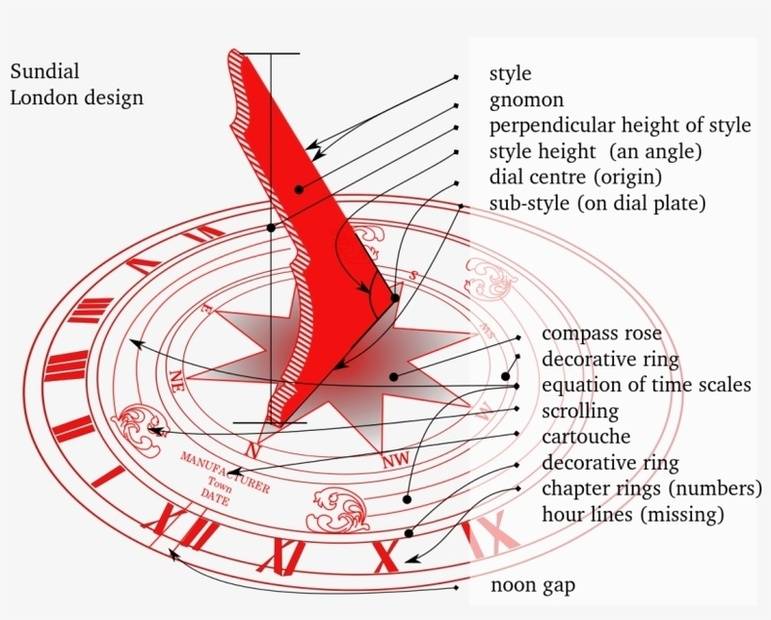 Isn't it just that you need the sloped bit of the gnomon to be parallel to the rotation axis of the Earth? Thus it makes an angle with the floor equal to your latitude.
Last edited: Dec 14, 2021
DaveC426913
Gold Member

Ibix said:
Isn't it just that you need the sloped bit of the gnomon to be parallel to the rotation axis of the Earth?

Is angle what the OP means by "height"? I assumed the OP meant length.
But your suggestion makes much more sense.
Ibix
Science Advisor
Insights Author
2022 Award

See the fourth bullet in the diagram you posted.

Depends on whether the OP knows that, of course. Let's see what they say.
Cerenkov

Would the 'Equation of Time' be of any help to Luxdot?

I ask because when I was considering putting a sundial in my garden, a member of the local astronomy club advised me to employ this equation when setting the gnomon in relation to the sun.

Yes, I am talking about the angle! So this has to do with the rotational axis of the earth?
Ibix
Science Advisor
Insights Author
2022 Award

Luxdot said:
Yes, I am talking about the angle! So this has to do with the rotational axis of the earth?

Yes. If you align the style parallel to the Earth's rotation axis then the movement of the shadow is a constant rate. You can use any angle you like, in fact, but the non-uniform motion makes it harder to read the dial when the shadow isn't pointing exactly at a marking.
Luxdot

So what would happen if the angle is decreased? I.e. smaller than the correct one for that latitude?
collinsmark
Homework Helper
Gold Member

Luxdot said:
So what would happen if the angle is decreased? I.e. smaller than the correct one for that latitude?

I'm assuming you're asking about the vertical angle above the horizontal plane.

If that angle doesn't match the latitude, unnecessary errors will be introduced in different seasons. If the angle is wrong, and you trace out the hour lines in the spring or fall, they'll be a little in error in the summer (either too "squished up" up or too spread out) and in error in the other direction in the winter. If you want to minimize this seasonal error, ensure the vertical angle matches the latitude.

[Edit: and if you have the option, you should trace out the hour lines based on your latitude.]

There will still be other sources of error such as time zone considerations, Daylight Saving Time (if that applies in your location), and the fact that Earth's orbit around the sun is not perfectly circular.

That last one is the curious one. A century or so ago, the errors caused by Earth's orbit being slightly elliptical wouldn't be errors at all. The sundial was the "correct" timepiece. If a clock said differently it was the clock's fault. The clock was in error. The sun's position in the sky was the correct source of time.

Things have changed since then, but the change happened not too long ago. On the grand scheme of human history, it was only quite recently that we changed paradigms, and started using [non-solar based] clocks to keep official time.
Last edited: Dec 18, 2021
Share:
Share

Suggested for: Question about a horizontal sundial

A Analemma layout and proportions on a sundial

I Question about Kuiper belt

B Question about the solar system and gravitational forces

B Question about Planck's Function

I Questions about the Voyager spacecraft

A Question about extragalactic stellar motion

B Questions about Lagrange points in the Pluto / Charon system