TL;DR Summary
How much of the universe will consist of black holes in the future?

I keep seeing this figure of 3-4 Solar masses is all that's required for a star to end its life by collapsing into a black hole.
Since the sun is a pretty average star, that would suggest that most of the stars in the universe (like >50%) will end their lives as a black hole.

The implication is that the universe of the future will be have more black holes than stars, give or take.


I went to check my figures before posting and came across this passage on Wiki:

"The result is one of the various types of compact star. Which type forms depends on the mass of the remnant of the original star left if the outer layers have been blown away (for example, in a Type II supernova). The mass of the remnant, the collapsed object that survives the explosion, can be substantially less than that of the original star. Remnants exceeding 5 M☉ are produced by stars that were over 20 M☉ before the collapse.

If the mass of the remnant exceeds about 3–4 M☉ (the Tolman–Oppenheimer–Volkoff limit), either because the original star was very heavy or because the remnant collected additional mass through accretion of matter, even the degeneracy pressure of neutrons is insufficient to stop the collapse. No known mechanism (except possibly quark degeneracy pressure, see quark star) is powerful enough to stop the implosion and the object will inevitably collapse to form a black hole."
https://en.wikipedia.org/wiki/Black_hole

Did I just solve my own problem?
The 3-4 Solar masses is the remnant, measured after the supernova explodes. I have never read that salient detail anywhere before.

So, simplistically, only stars of 20 solar masses, give or take, will ultimately become BHs, I guess. A much smaller fraction.

DaveC426913 said:
Since the sun is a pretty average star, that would suggest that most of the stars in the universe (like >50%) will end their lives as a black hole. 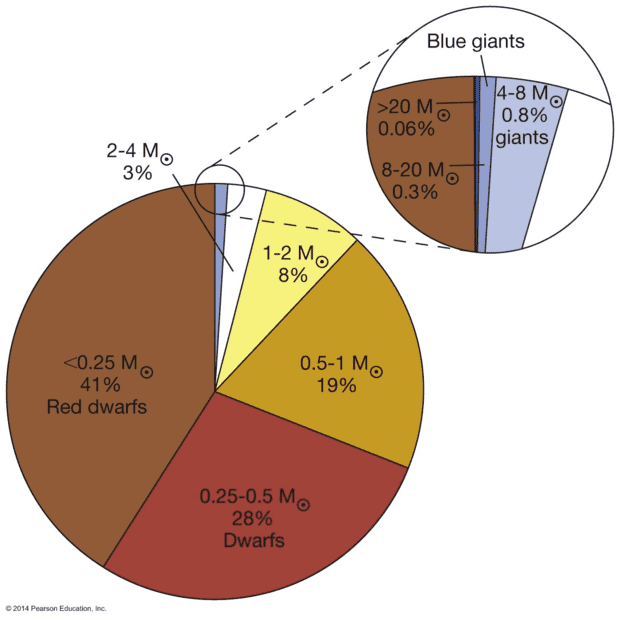 What I meant was, if you gathered all the stars that are > 3-4 Sols, you would have a fraction of stars somewhere near half.

Apparently not, as this excellent chart makes quite plain - it's 3%.

I had not thought that Sol was among an exclusive group of stars as measured by size (I mean, I knew dwarfs were the most common, but it didn't occur to me to that that meant everything else would be that ... rare. Duh.)

Wow. Your answer to my question is all wrapped up with a bow and ribbon!
Last edited: Sep 19, 2021
Keith_McClary
Gold Member

The large ones don't last long:

In the neighbourhood of Sun, Sun is in less than 10 % of brightest stars:
https://en.wikipedia.org/wiki/List_of_nearest_stars_and_brown_dwarfs
Sun in number 4 (behind Sirius A, Procyon A and Alpha Centauri A) of about 66. Barnard´s star is actually close to average (about half of all stars are dimmer, half are brighter)... and has less than one thousandth the brightness of Sun.

However, a problem with the star counts is than unspecified star counts tend to be star counts at present. Stars as big as Sun and smaller last the age of the world so far, thus the distribution by mass has always been the same. Not so with massive stars. Bright massive stars are rare but this is at least partly because they are short lived - true, a minimum of 2 million years by Eddington limit, but this is a small fraction of the age of Milky Way. The Milky Way must contain old and cold neutron stars and black holes of many generations of briefly bright stars. Does anyone have numbers for the old massive star remains, compared to lighter stars?
Erik 05

The mass required for BH formation isn't the clear cut, also depends on star composition and the type of supernova. It's possible that very large mass stars leave neutron stars rather than blacks holes, or even no remnant at all - depends how much mass is lost in the supernova. I have a diagram somewhere... from Woosley et all, 2002, sorry it's not that sharp... Also note this is from models of non-rotating stars. 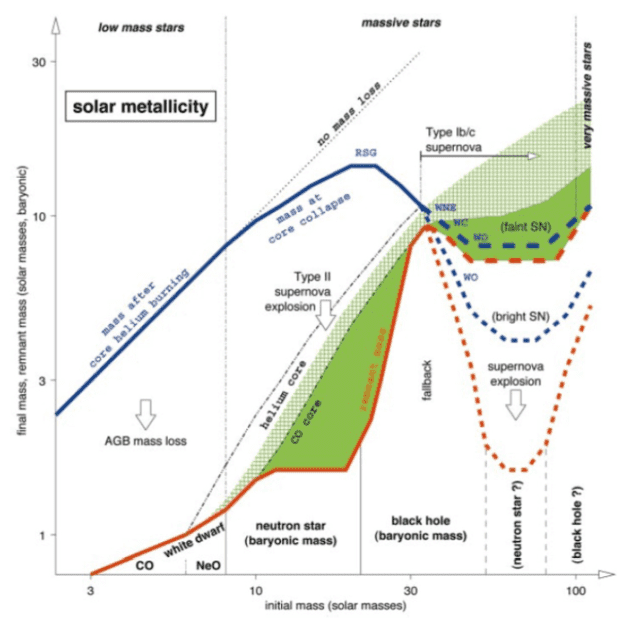 Suggested for: Stars massive enough to evolve into black holes

I Does Dark Matter Fall into Black Holes?

B So, a black hole and an antimatter star bump into each other....

B Is it possible for a giant star to have a black hole inside it?

I Black holes and relation to creation

I Information loss in black hole, why is it a problem?

I Formation of super-massive black holes

I Would it be possible for a black hole to have a "solar system"?