Los Angeles, CA - In what is no doubt one of the most anticipated moments in rock and roll, VAN HALEN officially announces their 2007 North American tour.

The tour will mark the first time since 1984 that original VAN HALEN front man David Lee Roth will perform with Eddie and Alex Van Halen along with new bassist Wolfgang Van Halen for 40 shows this summer.

Eddie Van Halen states, "I am very excited to get back to the core of what made VAN HALEN."

God. Terrible. It's just for the money, for sure...all of their fans are now 30-somethings with disposable income, and they'll be willing to dump 200 dollars for a crappy seat.

Led Zeppelin is reuniting as well. God help us all.
radou
Homework Helper

Rock'n'Roll, unfortunately, as it seems to me, only lives on on our gramophone and cd players, and not on any stage.
russ_watters
Mentor

Hey, if they can still rock, why the heck not? If Floyd were able to stop being babies and get back together, they'd sell out stadiums around the world. They just need to stop before they reach their '80s like the 'Stones. I know some people who saw them last time around and they said it was terrible. You just can't rock if you have to have the microphone mounted to your walker and the Depends are very constricting.
radou
Homework Helper

Well, as one Jethro Tull song says, '...you're never to o-o-old to rock'n'ro-o-oll if you're too young to die.' The question is only what 'too young to die' means.
Astronuc
Staff Emeritus
Science Advisor

I can't imagine that they will be as good as they were 29 years ago.

Besides, Michael Anthony is out of the lineup. It won't be the same. :yuck:

I couldn't make myself go to a Stones concert 30+ years ago. I didn't particular care for there music after 1969 when they released the album 'Let it Bleed'.
Mk

Yep! I've been waiting and watching! His son is in the band too!
Schrodinger's Dog


"A proposed summer amphitheater tour by the group never got off the ground, with Eddie Van Halen entering a rehabilitation facility for undisclosed reasons in March.

In the months since, the guitarist has been seen publicly looking healthy and fit."
Math Is Hard
Staff Emeritus
Science Advisor
Gold Member

I dunno. I LOVE Van Halen (never was much of a Van Hagar fan) but a lot of time has passed... 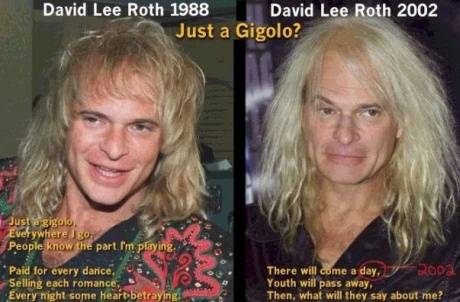 For me, VH has always been about the music.
I hope they can still rock-n-roll.
robphy
Science Advisor
Homework Helper
Insights Author
Gold Member

Some photos and videos from the first shows...thanks to the internet...

They may still be able to rock. I can't play out in public any more (and haven't been able to for the past 10 years or so because of physical reactions to fragrance chemicals), but until then I was participating in or running open-mic blues jams every week. Musicians would come from over an hour away every week to participate, and some of them were playing professionally, but had to come out and play for free just to kep their hand in the hotter side of the music scene. VH may be over the curve and past their prime, but I wouldn't count them out if they're game.
Integral
Staff Emeritus
Science Advisor
Gold Member

The Portland show is on [tex] \partial [/tex]'s Bday, she is a big VH/DLR fan. My stepson was able to get some tickets for the nosebleed seats in the Rose Garden. He was second in line, the guy behind him hymed and hawed for a minute and got nothing... sold out.

And now for a Friday musical interlude, we bring you Van Halen caught on its comeback tour, except there was one big problem and it involved gadgets. What happens when you play back a prerecorded synthesizer track at 48K instead of the intended 44.1K? The whole track plays back a little bit faster and at a slightly higher pitch, that's what. A dissonant musical mess ensues, trapping the guitarist and bassist in an on-stage musical hell with nowhere to go.

See Eddie Van Halen launch into his famous solo on "Jump," trying in vain to somehow transpose to this otherworldly key that is nowhere to be found. This travesty of a performance happened earlier this month (in my hometown of Greensboro, North Carolina), and the funny thing is, the crowd was delighted with it. I shutter to think that no one realized something was terribly amiss, but those hometown folks always were overly polite. [RW370, via BoingBoing] (Thanks, Joel Johnson!)

Intermediate Axis Theorem.... fun to learn it again with You Tube

World's most valuable postage stamp is for sale again