Why do natural Moons revolve around planets?

officialmanojsh
Why do Moons revolve around planets? If because of gravitational pull, why won't they clash with planets. Please help me get answer to this question!?

They are in orbit, so they have a certain acceleration which is just enough to balance out the gravity between them.
There seems to be a thorough discussion here:
https://www.physicsforums.com/threads/why-does-the-moon-rotate-around-the-earth.468212/
Bandersnatch
Science Advisor

Here's a picture of 'Newton's cannonball': 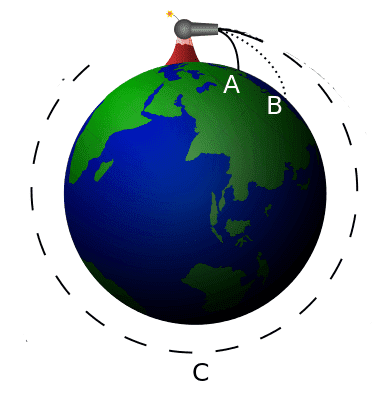 There are three trajectories depicted. In all three cases the gravity is pulling the cannonballs in towards the centre of the Earth.
And yet, trajectory C is not crashing onto Earth.

Can you tell us what you think is the main difference between the three? What makes B fall farther than A? What does the cannon do with the cannon ball?
officialmanojsh
Hello to you too Bannersnatch, the answer is Centripetal force. Even acceleration of ball C is correct. Am I right about why canon ball C today's like that.?
Bandersnatch
Science Advisor

The only force acting on all three balls is the gravitational force. In the case of ball C this force will act as the centripetal force. But let's not get into that now.

Try and think of what makes ball B fall farther than ball A. What does the cannon do with the balls?
officialmanojsh
Angle depression of canon and force of which it shoots canon balls varies from ball a to b to c. Angle of depression of firing ball C is @horizontal line
Bandersnatch
Science Advisor

Alright. Notice that the picture depicts (or at least should depict) the cannon as shooting at the same angle in all three cases. That leaves the 'force of a shot', or acceleration it imparts to the ball in the barrel.

Therefore, as the three balls leave the barrel and are no longer accelerated, they all have different velocities.

That's the only difference.

officialmanojsh said:
Angle depression of canon and force of which it shoots canon balls varies from ball a to b to c. Angle of depression of firing ball C is @horizontal line

No. Although the scale of the picture makes it hard to see, in all three cases the cannonball leaves the cannon at the same angle (horizontal) and only the muzzle velocity is different. The slowest-moving ball (A) seems to making a steeper angle, but what's really going on is that because it's moving more slowly it doesn't travel as far left to right in the time that it takes it drop by a given amount as do the other two.

[edit: Bandersnatch beat me to it :) ]
officialmanojsh
It would be better if you finally say complete answer bro! ;)
Bandersnatch
Science Advisor

officialmanojsh said:
It would be better if you finally say complete answer bro! ;)

Sorry, that's not how this site works (most of the time). We're here to help people understand physical concepts, and not being spoon-fed the answers is how people learn best. Getting there yourself is how you develop intuition.
If you want a straight answer, just type your question in google.
officialmanojsh
I hope I've got the answer. Hey Bannersnatch, is answer mass?
officialmanojsh
Hey am I right bandersnatch bro????
Bandersnatch
Science Advisor

officialmanojsh said:
I hope I've got the answer. Hey Bannersnatch, is answer mass?

It's the same in all three cases.
RUber
Homework Helper

So imagine that the moon is the cannonball. As it is introduced at some initial time into our system.
In cases A and B from Bandersnatch's diagram above, the moon crashes into the earth and we all die. In case C, it falls into a nice orbit.
I would argue that there would even be a case d where the moon goes off into space and does not come back.
In all cases, the mass, angle, etc. are all the same, only one difference as stated in posts 7 & 8 is velocity.
Luckily air resistance in space is negligible, so the moon will likely continue to orbit for a while.
What force does velocity impart on an object?
That is the force that has to balance with gravity to keep it orbiting.
Nugatory
Mentor

RUber said:
I would argue that there would even be a case d where the moon goes off into space and does not come back.

There is - with enough initial velocity the cannonball would head off into space on a hyperbolic trajectory.
Drakkith
Staff Emeritus
Science Advisor

RUber said:
What force does velocity impart on an object?
That is the force that has to balance with gravity to keep it orbiting.

This is incorrect. Velocity does not 'impart a force'. There is no force working against gravity to keep something in orbit. The object simply has to go fast enough so that as it falls it continually misses the ground.
TEFLing

Something in orbit has lots of energy and angular momentum

So something in orbit will tend to stay in orbit until acted upon by some other huge force
Share:
Share

Related Threads on Why do natural Moons revolve around planets?

I Why are the planets revolving around their own axis?

Do the planets revolve on a 2d plane?

Why do planets rotate?

Why does Pluto revolve clockwise

Why do the planets spin ?

Composition of planets vs. moons

B Miscellaneous Trivia: Planets and Moons

S
Why do Jupiter's moons line up?