Why Euler-Bernoulli beam theory does not work in this case?

i would like to ask You a question about difference in results between Euler-Bernoulli method of analysis of stress in short slender beam and 3D FEA method mentioned in ansys aim tutorial here: https://confluence.cornell.edu/pages/viewpage.action?pageId=33636829
The problem looks like this:

HOwever, as i mentioned, the result form ansys for sigmaX is 1833psi.
What is worng with that theory?

In that tutorial here: https://confluence.cornell.edu/pages/viewpage.action?pageId=3363682 It is mentioned that "substantial out-of-plane stresses (sigmaZ, simgaY) result in Poisson effects on the normal wall stress (sigmaX), increasing its value substantially".

I understand that sigmaZ (710psi according to ansys) is due to the fixation of this beam however sigmaZ is positive = its tensile. simgaX is also tensile so sigmaX should be REDUCED according to Poisson effect. And according to ANSYS it really is because overall equivalent stress (1400psi) is actually smaller than sigmaX (1800psi). (Its due to the fact that all stresses are tensile ( i talk about point above neutral axis)
But it is still much higher than simgaX of Bernoulli

https://ctrlv.cz/F1mf - this shows only representation of stresses


So the big difference in simgaX between Euler-Bernoulli (sigmaX=850) and 3D FEA ANSYS method (sigmaX=1800psi) can not be caused by out of plane stress.


I would like to ask, why is the real value of sigmaX almost two times higher than it is according to Euler-Bernoulli beam theory?
Is it due to the fact, that beam is short and has it sth to do with shear stress?
What theory can be used to calculate analytically more accurately the value of sigmaX (i mean value close to the reality) ?

I know that simgaZ is zero according to euler and that it is not true, but it should decrease sigmaX and not increase it...
It seems so simple, so please answer me.

If you were to take a detailed look at the stress pattern of the subject FEA analysis, you might find that its maximum combined stress is confined to very small strip across the top edge of the beam where it and the connecting wall meet. I don't have specific past experience with analysis of this particular structure; but based upon my past experience with FEA, from it earliest application, it is definitely not enough to act just on a displayed maximum stress value without looking at the stress pattern associated with it as well. FEA is not a pay and play method, as it has unfortunately been marketed for many years starting from it earliest availability, it takes well trained operators and well informed engineers about its capabilities and quirks to be effectively applied.

All of that said, under loading, one of two things could result from a confined region of combined tensile stress such as at the top intersection of the wall and beam. If it exceeds the material's yield strength, a small amount of yielding in that region can relax that stress (as will probably occur with ductile materials); or, (for a brittle material) if it exceeds tensile strength of the material under loading, it could result in the initiation of a growing fracture and possible failure of the connection.

Clearly FEA, when properly applied with the correct meshing density distributions, is a valuable tool that gives us the capability to analyze structures and designs to a degree of preciseness that is beyond the classical methodologies and capabilities previously available to us; otherwise, it would be of no value.
kravky

Thanks for detailed explanation. Yes, as u mentioned, the maximum combined stress is confined to a pretty small strip across the top edge of the beam: https://ctrlv.cz/NEZv

will not get meaningfull answers for SigmaXmax.

I am not clear on what a "rotation between the cross section and the bending line" describes; but, one quick way to determine the relative stiffness between the example FEA analysis and a classic Euler-Bernoulli beam analysis is to compare the beam's end deflection of each. Comparing the stresses calculated by FEA vs classical analysis to test the validity of an FEA result is difficult; but, in the past, I have found that comparing the deflections between the the two methods is a straight forward and reliable method. Small variances can be expected but any major variance is definite cause for a careful review of the two analyses.
kravky 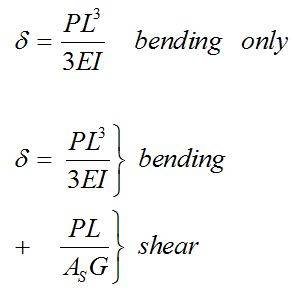 where the relevant shear area is approximately the area of the beam web only.

As you stated " the relevant area is in the area of the beam web where the stresses are apparently not high enough relative to the extreme fiber stress on the outer face of the flange or the increase would have a more significant effect on the beam deflection than 4%. This does not mean that the information and its effect on the beam deflection are not of interest but to make a statement "that it increases the stress 100%" without stating where it is and how or if it affects the critical stresses in a component (such as the last statement about the location being on the web) is pointless.

Right now you are gaining important knowledge about what FEA can achieve in improving the design and safety of designed products. The next important step in your education (that generally happens when you enter industry) will be learning how and where is knowledge is best applied in a practical manner.

Due to the tolerances and localized surface and interior defects inherent in produced materials there is a variance in the actual stress experienced from one manufactured product to another and that is why, for example, the term Min Yield Strength and Min Tensile Strength, (which are actually stress values as we know) are used in foundry material certificates. In fact, testing of the actual marketed materials reveals that all of them have yield and tensile strengths greater than that on the certificate.

In critical situations, manufacturers will, rarely, but on occasion, run yield and tensile testing to determine the real values for their actual received material specifically so they can increase their design stresses accordingly; because, they know that doing so does not reduce the target design Safety Factor of their product. Each type of industry has its set of standards or standard practices related to the stress limits they are allowed to use in their designs; and, some (ie. aircraft designs, are much higher than others, but their material certification standards, tolerance allowances, inspection procedures are correspondingly tightened.
Chestermiller
Mentor
Insights Author

My money is also on the shear bending associated with this short beam. Why don’t you do a test to enaluate the effect of the beam aspect ratio on the difference between thin beam theory and finite element?
JBA
Science Advisor
Gold Member

It appears to me that the adding of a tensile stress at the beam flange surface and the maximum shearing stress on the web (I would expect this to be located at the joining line of the web and flange inside face) and using this sum as the maximum stress for calculating the deflection of the example beam just does not make sense. Will you please give some feedback as to the reasoning behind this stress adding being proposed.
Share:
Share

Related Threads on Why Euler-Bernoulli beam theory does not work in this case?

U
Why does pure axial loading cause shear stress?

Which location will experience the most stress in this case? (pulley & shaft system)