Why is Classical Physics Broken up again?

Why is the Classical Physics forum now broken up into sub-fora? I finally got used to the combined version! 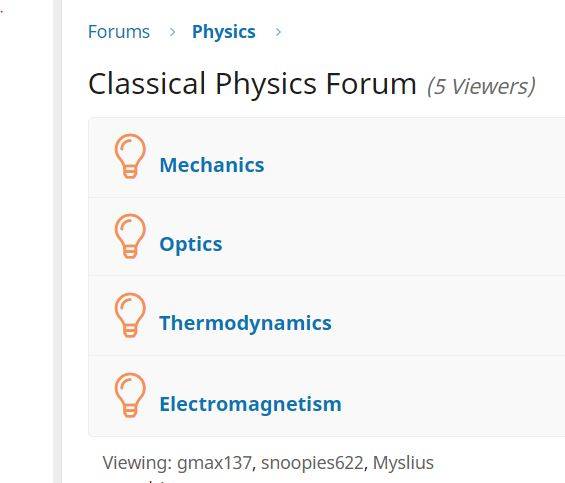 Just got used to the combined version? It was in its previous state for many years

Testing to see if adding more structure improves user experience in finding content they are interested in, rather than the one huge bucket. If it's a positive experience we'll see where else we can do the same.
gmax137
Science Advisor

Greg Bernhardt said:
It was in its previous state for many years

Well, time flies when you're having fun!

I like the huge bucket approach. But, I'm adaptable :)

Here's a thread discussing the change I was thinking about.

Overly specific bins make it harder to stumble on something interesting that one didn’t think was interesting. I think that there is an upper limit to the total number of bins, but the number is open to interpretation.
Last edited: Jun 30, 2021
robphy
Science Advisor
Homework Helper
Insights Author
Gold Member

Instead of these bins, could one have some small selection of suggested tags that the questioner could select and have displayed color-coded on the list of threads (like the Chemistry, Engineering, Challenge tags visible on the home page)? Then, one can see the categories at a glance and maybe filter for them.

The tagging would allow topics that would overlap with multiple bins.

I see there is a tagging setup...
but maybe presenting a small selection of tags would encourage its use.
jasonRF
Science Advisor
Gold Member

I'm sure part of my issue is that various aspects of my graduate specialty, plasma waves, can conceivably fit in all of the classical physics sub-forums depending on a given person's perspective. I sure hope they end up in the 'general' classical physics forum, though. At the same time I do realize I am probably in the minority, so will of course happily work within the new framework.

There are still a number of threads in the "general" classical physics section that can be moved to the mechanics sub-category. Also, I feel that maybe "Mechanics" could be renamed to "Mechanics and Dynamics".
jasonRF
Science Advisor
Gold Member

Wrichik Basu said:
There are still a number of threads in the "general" classical physics section that can be moved to the mechanics sub-category. Also, I feel that maybe "Mechanics" could be renamed to "Mechanics and Dynamics".

If we have sub-forums, I agree it should be clear what each encompasses. To me "mechanics and dynamics" is also ambiguous, since it isn't clear whether it includes continuum physics. Likewise, it isn't clear what topics should be in electromagnetism and what should be in optics. In my mind they are the same thing, probably because the topics I am most knowledgeable about easily fit in either bin. That is part why I favor a generic 'classical physics' category.

EDIT: or at the very least, combine all of electromagnetic theory (including optics) into one bin.
Last edited: Jul 20, 2021
Vanadium 50
Staff Emeritus
Science Advisor
Education Advisor

I did a search of messages since the change. Roughly 1/3 of the messages that should be in a subsection are. Some (thermodynamics) are better than others (mechanics).

Vanadium 50 said:
Is this a success?

Suggested for: Why is Classical Physics Broken up again?

Bug Cannot pull up all the posts that I have made

Why Preview sometimes won't work till after a post is posted?

Suggestion Why don't we have Physics challenges in PF?

Why I don't like a well-meant response and what is wrong with it.