Soooo, hi PF, it's been a long time since I needed your help, but here I am again.

I've been doing some worldbulding lately and I came up with this idea of a world in which civilisation and life are much, much older than in ours. Yet it isn't as developed due to some kind of natural disaster that makes a cataclysm happen either one time trough the whole planet's history or a cycle that lets this happen a few hundred thousand years or so. The thing is, I wanted this recurring events to heavily influence the way life in the planet is and develops trough generations, so I thought that some radiation would be nice to speed up the evolution of intelligent life, with the only cost of having a massive extinction every now and then (also, cool radiation generated mutations that pass natural selection are great for the magic system).

What I want to know is which of the following is more realistic to accomplish what I expect: a Solar storm that lasts 500 years or a binary star system in which a sun like star (which our planet orbits) has an enormous orbit around a much bigger, hotter and more radiation emitting star,to which it only passes close to notice it's effects every hundred thousand years or so. I left below an image of something that kind of resembles what I mean with this second scenario. 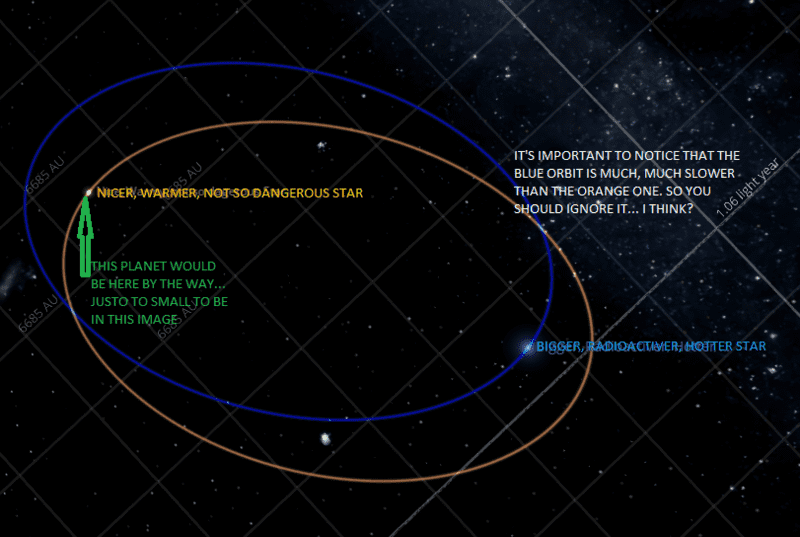 The magic system is complicated, so if you care I'll tell you, but it suffices to say that in order for people to use the "magic" (which isn't magic there, duh) they'll need a little push, and this radiation thing could be the way to have that naturally develop trough genetics and stuff.

Your theme sounds similar to Cixin Liu’s book The Three Body Problem in that a complex solar system of three suns called Trisolaris, wreaks havoc on a planetary civilization to the point where they want to escape to one that is more hospitable.

Thanks a lot! It seems like a really amazing story. I now want to read the whole thing, so thanks again for introducing such an idea to me!!!
anorlunda
Staff Emeritus
Insights Author

A Series of Exoplanets in Our Solar System

Kepler Bb and its solar system

Economy in our solar system

Questions about moons of the solar system

Help with the physics of a fictional geocentric solar-system